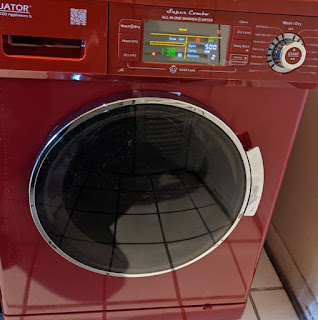 As America’s racial justice reckoning finally catches up with “child welfare” – or, as it should be called, family policing – the “child welfare establishment is engaged in its own campaign of reputation laundering.  Yet none of the recent trips to the reputation laundry from child welfare establishment groups includes support for any proposal that would reduce their power.  That’s how we know the real goal is to co-opt the rhetoric of change and put it to use maintaining the oppressive status quo.  Consider the second of three recent examples.

That’s the name-of-the-moment for a group seems to change its name more often than most people change their Facebook profile pictures.  Most recently it was the Alliance for Strong Families and Communities and before that the Alliance for Children and Families. But no matter how much they try to hide it, it’s another trade association full of private foster care and “residential treatment” agencies.

Their “Director of Practice Excellence,” Amy Templeman, co-authored an op-ed column for The Hill with the authors of an important study debunking the racist myth that, in the absence of overwhelmingly middle-class, disproportionately white  “mandated reporters” in the lives of children who are neither, COVID-19 would lead their parents to unleash upon them a pandemic of child abuse.  On the contrary, the increase in direct cash assistance and community-based mutual aid organizations prevented any such pandemic.

On the surface, the op-ed is a plea to continue such assistance in order to reach families “upstream” (which, by the way, is the latest buzzword in child welfare). But look more closely: Templeman contends that one way to do that is to reauthorize the federal Child Abuse Prevention and Treatment Act (CAPTA).

CAPTA is the federal law that did so much to get us into this mess in the first place.  It is CAPTA that encourages states to create the massive child welfare surveillance state that includes mandatory reporting laws that inflict needless trauma on millions of children each year – to the point that more than half of all Black children will have to endure a child abuse investigation before they turn 18.  The very research highlighted in the op-ed shows these laws are not needed to keep children safe, and other research shows they backfire, overloading workers so they have less time to find the few children in real danger and driving families away from seeking help – in other words away from the “upstream” prevention Templeman claims to support. 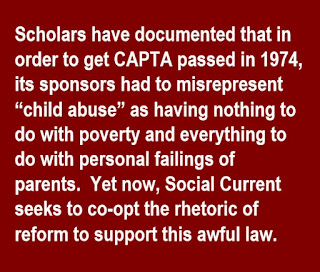 CAPTA also encourages massive state databases of rumor and innuendo – so-called central registries that ensnare millions who are falsely accused or whose poverty is confused with neglect.  These blacklists – in every sense of that term - shut impoverished parents out of exactly the kinds of jobs most accessible to poor families, driving them deeper into poverty.

And CAPTA drives women away from seeking prenatal care and away from giving birth in hospitals, through provisions demanding that states turn them in to the family police if their newborns are “affected” by drugs.

The actual amount of money states get through CAPTA is tiny – they would save more by defying its odious provisions, thereby reducing needless investigations and foster care.

Scholars from Barbara Nelson to Mical Raz have documented that in order to get CAPTA passed in 1974, its sponsors had to misrepresent “child abuse” as having nothing to do with poverty and everything to do with personal failings of parents.  Yet now, Social Current seeks to co-opt the rhetoric of reform to support this awful law.

Perhaps that’s because the only people who do benefit from CAPTA are agencies that investigate families, and agencies that provide often useless “preventive services” like “counseling” and “parent education” and/or warehouse children in foster care: In other words, members in good standing of “Social Current.”

CAPTA isn’t the only part of Social Current’s agenda that belies Templeman’s rhetoric.  Social Current wants to blast a huge loophole into federal law to make it easier for states to use federal Medicaid funds on the worst option of all: institutionalizing children.  That’s about as far from “upstream” as you can get.

This also is unsurprising given Templeman’s other hat: running a division of Social Current designed to implement recommendations from a federal advisory commission – a commission whose entire thrust was to vastly increase family policing.

And that role brings us to Templeman’s other exercise in reputation laundering.  In a recent journal article she co-authored, she engages in a nearly Trumpian mischaracterization of the commission report, a misrepresentation reminiscent of how the aforementioned Bill Barr mischaracterized the Mueller report.  But unlike the situation with Barr, Templeman actually was executive director of the commission whose report she now misrepresents.  Compare for yourself:

● How Templeman spins the report

● NCCPR’s full analysis of the report

But the mischaracterization of the commission report is just the beginning.  The thrust of the journal article is supposedly a critique of mandatory reporting laws – the same laws mandated by CAPTA.  The article admits that “mandatory reporting, as it stands, is not an evidence-based policy.”  It goes on to review the harm of these laws – though it understates that harm. 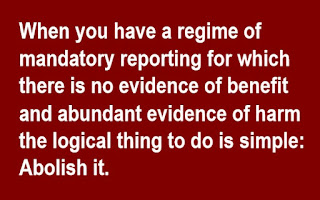 When you have a regime of mandatory reporting for which there is no evidence of benefit and abundant evidence of harm the logical thing to do is simple: Abolish it.

But Templeman and her coauthor do not propose abolishing mandatory reporting; they propose only “improving” it.  They don’t propose curbing current mandatory reporting laws in any way.  Instead, they appropriate the rhetoric of family policing abolitionist Joyce McMillan.  Over and over, without attribution, they use a version of McMillan’s phrase “turn mandatory reporters into mandatory supporters.” But they strip it of all meaning, co-opting it in service of an agenda that suggests little more than adding other phone numbers mandated reporters could call instead of "child protective services" - and, of course, that classic panacea – more training!

There is not one recommendation in their paper that would in any way curb the power of the system.  And though they’ve stolen Joyce McMillan’s line, there is nothing in their proposal to make mandatory reporters mandatory supporters.

But Social Current and the other groups we spotlight in this series will never go near an agenda like that.

On Monday: One more example.

Read all the posts in this series here.

Posted by National Coalition for Child Protection Reform at 3:13 AM