NCCPR in the Philadelphia Inquirer: Philly doesn’t have too few foster homes. It has too many foster kids.

The city can make smarter choices that will reduce the number of kids placed in foster care, which will reduce strain on the system — and save kids from having to sleep in conference rooms.

We’ve all heard the adage that goes: “The definition of insanity is doing the same thing over and over and expecting a different result.” A classic example of that adage is Philadelphia’s approach to the welfare of its children.

In 2016, Philadelphia closed its only juvenile psychiatric residential treatment facility — Wordsworth — after a 17-year-old died in a fight with staff. The city opened another in 2020, but that facility soon lost its license due to “multiple child right violations,” according to the state. Now, the city is asking providers to bid for a contract to create another facility.

There are better answers. …

Read the full column in The Philadelphia Inquirer

Posted by National Coalition for Child Protection Reform at 1:32 PM

At last! One news organization gets the makeshift placement story right!

The Philadelphia Inquirer zeros in on real solutions

Here’s something I never thought I’d see in a story about children trapped in night-to-night placements because family policing agencies (a more accurate term than “child welfare” agencies) had no place else to put them:

Advocates say what’s needed now is to address the short-term glitches while pursuing the long-term vision of supporting more families at home — not backsliding into the era when congregate beds were ample and eagerly filled by a system that saw removing and institutionalizing kids as an easy fix.

But there it was, in one of two outstanding stories in The Philadelphia Inquirer Thursday.  It’s taken a long time.

As I recall, every one of those stories got the solutions wrong.  Oh, there might be a token paragraph somewhere about how “prevention” is a really good thing.  But that part about “not backsliding into the era when congregate beds were ample and eagerly filled by a system that saw removing and institutionalizing kids as an easy fix”?  Never!

Instead, the reporters would accept as gospel the party line from the “residential treatment” industry. It’s always some version of: “See, we need to build more places to institutionalize kids!” Or, “See? We told you you shouldn’t have shut down our hellholes sorry, therapeutic communities!”

It would have been easy for The Philadelphia Inquirer to fall into the same trap.  After all, Philadelphia has made significant progress in reducing the number of children torn from their families.  But Philadelphia now has a serious problem with children staying night-to-night in family police agency conference rooms, among other awful places.  Workers sum up the conditions there as “chaos.”  And Philadelphia either shut down or pulled kids out of several institutions in recent years – because the institutions themselves were so abusive. 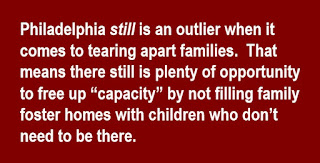 But perhaps because colleagues of reporter Samantha Melamed exposed horrific abuse in some of those institutions, such as Glen Mills (which is now closed) and Devereux, she wasn’t ready to accept the idea that the answer is to reopen them, or build new ones.

Yes, the story includes the usual claim from a residential treatment trade association representative, whining that, now that the city has “reduced capacity” (by refusing to warehouse all those children in hellholes) it’s “destabilized the industry” making it hard to find placements for children with “really complex or sophisticated behavioral health needs.”

But instead of simply accepting this claim at face value, Melamed broadened her source base.  For starters, she explained Philadelphia’s longstanding dismal status as a child removal outlier:

For years, Philadelphia DHS removed children from their homes at one of the highest rates in the nation. It was an agency shaped, in many ways, by its response to abuse scandals including the 2006 starvation death of 14-year-old Danieal Kelly while under DHS supervision.

Now, the city is part of a national and statewide push to stop institutionalizing kids, spurred on by the federal Family First Prevention Services Act. That shift comes amid a widespread recognition that abuses happen in those institutional settings, too — and with startling frequency. It’s also an acknowledgment of racial disparities: Black children account for 13% of Pennsylvania youth, but 35% of those in foster care and two-thirds of those in state juvenile-justice placements …

But the story goes on to explain that, even with the improvements, Philadelphia still is an outlier when it comes to tearing apart families.  That means there still is plenty of opportunity to free up “capacity” by not filling family foster homes with children who don’t need to be there.

In the child-welfare system, Community Legal Services of Philadelphia’s Kathleen Creamer said the city needs to double down on preventing family separations.

Already, she noted, Philadelphia DHS has reformed its process for screening and investigating abuse allegations, and increased funding for legal aid for families. It also begun holding rapid-response meetings to enlist extended families to help kids in danger of being removed. She said that work now needs to go even further, reallocating some of the millions that would be spent on group homes or foster care to properly fund the supportive services that can help families working to stay together.

“The question is, what’s the policy solution for this?” she said. “The policy solution is to stop separating so many families. We don’t have good placements for them, so let’s actually try to work with the family.”

Indeed, in a sidebar serving as what Malamed herself tweeted is “the tl;dr version” of the story she includes that paragraph I quoted at the top:

Advocates say what’s needed now is to address the short-term glitches while pursuing the long-term vision of supporting more families at home — not backsliding into the era when congregate beds were ample and eagerly filled by a system that saw removing and institutionalizing kids as an easy fix. 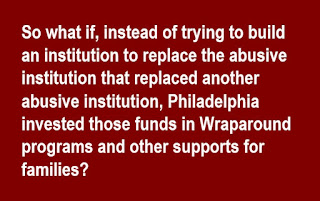 The residential treatment typically responds by saying something like: Even if you have enough families, what about all those children with “really complex or sophisticated behavioral health needs”?

In contrast, Wraparound services, in which anything a child needs is brought right into the child’s own home, or, when placement is genuinely necessary, a family foster home, do work.  There is nothing residential treatment does that Wraparound doesn’t do better and at less cost.

How does it work? differently for every child – that’s the point.  So the best way to understand Wraparound is to let one of its pioneers, Karl Dennis, give you an example:

But perhaps the best indication of why building more institutions won’t work comes in this part of the Inquirer story, the ultimate example of the adage that the definition of insanity is doing the same thing over and over and expecting a different result:

Wordsworth, Philadelphia’s lone juvenile psychiatric residential treatment facility, was shut down by the state in 2016 after 17-year-old David Hess died in a fight with staff. A replacement opened in 2020 — then quickly lost its license, too, due to what the state said were “multiple child right violations.” (The city last year invited two new providers to negotiate contracts for yet another replacement, but it’s not clear when such a facility may open.)

What if, at the same time, Philadelphia built on its progress to date and reduced its rate of removal to, say, that of New York City?  That would be well under half the Philadelphia rate.  What if Philadelphia then said to the foster parents in those now-empty homes: Take in the relatively few children who really need placement – and we will bring into your home whatever help the children – and you – need to cope with those “really complex or sophisticated behavioral health needs” and make the placement work?

Would that mean that no Philadelphia child ever again would have to spend even one night in an office or some other awful makeshift placement?  Probably not.  But it would happen to a hell of a lot fewer children than endure it now.

Posted by National Coalition for Child Protection Reform at 8:43 AM

Just two items of interest this week, one of which I’d missed when it was published in May:

● A federal judge refused to dismiss a lawsuit against the University of Pittsburgh Medical Center, alleging that UPMC drug tests pregnant women and their newborns without consent, reports the results to the family policing agency and, even if it’s no more than a false positive result for marijuana, the agency automatically investigates.

As The Legal Intelligencer reported, the judge wrote that:

“Averments set form in the amended complaint allege that [Allegheny County Children Youth and Families] used UPMC as a form of ‘cat’s paw’ to undertake inquiries and to administer drug tests on UPMC’s labor and delivery patients without their consent, and then to use reports of those ostensibly private and confidential medical inquiries and ‘provision and uncertain’ test results as a predicate to launch unwarranted and unconstitutional child abuse investigations.”

This case has significant implications well beyond Pittsburgh.  And it touches on multiple vital issues in family policing, including the harm of the so-called Child Abuse Prevention and Treatment Act and the dangers of “predictive analytics” algorithms in “child welfare.”  I’ve updated our in-depth examination of the case on this blog.

● On the matter of algorithms, we have a full update of our report on predictive analytics, Big Data is Watching You.

Four major corporate landlords filed thousands of evictions while federal moratorium orders were still standing, using aggressive tactics to force out tenants at the height of the pandemic, according to a new investigation by a House subcommittee. …

An email from an executive at [one major Texas landlord], for example, advised a property manager and regional manager in San Antonio to harass a tenant by towing her car, replacing her air conditioning unit with a nonworking unit, knocking on her door “at least twice a night” and even calling child protective services on the tenant if any children were present. (The committee referred its findings to the Texas Department of Family and Protective Services.) [Emphasis added.]

The referral will do no good, of course, because, though false reports are illegal in Texas, anyone can evade the law by making the call anonymously, something that won’t change until anonymous reporting is replaced with confidential reporting.

Posted by National Coalition for Child Protection Reform at 3:34 AM