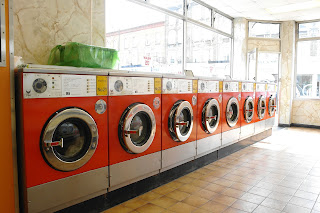 They want you to think their days of “health terrorism” are over.   But look again.  They, too are trying to co-opt the rhetoric of reform to promote the same old family policing agenda

As America’s racial justice reckoning finally catches up with “child welfare” – or, as it should be called, family policing – the “child welfare establishment is engaged in its own campaign of reputation laundering.  Yet none of the recent trips to the reputation laundry from child welfare establishment groups includes support for any proposal that would reduce their power.  That’s how we know the real goal is to co-opt the rhetoric of change and put it to use maintaining the oppressive status quo.  Consider our final example.

Health terrorism is not my term – I heard it at a presentation by Bart Klika, chief research officer for PCAA, who admitted that it was their m.o. for decades. PCAA denigrated any notion that poverty is confused with neglect. They even put out a special Spider-Man comic book in which a working mother is emotionally neglecting her child because she’s too busy “work[ing] with movie stars.”

Yet after decades of health terrorism that inflicted very real terror on millions of children victimized by needless investigations and needless, abusive foster care, Klika refused to apologize.

That alone should be reason enough to exclude PCAA from any serious discussion of how to deal with child abuse and neglect and to call out their current rhetoric for what it is: reputation laundering.

Thus, an op-ed column from Kylie Spies of one of Prevent Child Abuse America’s most influential chapters, the one in Iowa, tries to graft the language of reform onto the same old health terrorism.  It offers a token mention of the success of COVID stimulus funds in curbing “abuse” by curbing poverty.  But that comes only after suggesting that the most wonderful thing any Iowan could possibly do is to turn in a neighbor as a child abuser!

More reporting of alleged child abuse is wonderful, Prevent Child Abuse Iowa says, because, while it reveals stress in a community

it also measures the connectedness of a community.  The number of reports each year is a measure of time spent with caring helpers like teachers and pediatricians who are trained to spot signs of abuse. It’s the number of concerned coaches, neighbors, and relatives who noticed a problem. It’s the number of courageous children and youth who told a trusted adult the heavy secret they’ve been carrying. And the most common abuse type, “denial of critical care” (also known as neglect), contains an additional measure of a community — families’ ability to meet their basic needs. 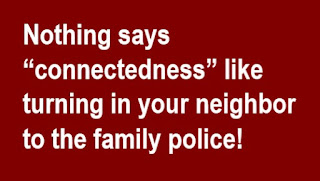 Yes, nothing says “connectedness” like turning in your neighbor to the family police – and explicitly declaring that poverty is the most common form of “abuse”!  No wonder, year after year, Iowa tears apart families at a rate far above the national average, even when rates of family poverty are factored in.

Spies goes on to caution that

The relationship between neglect and poverty is complex, and it’s important to understand that poverty is not child abuse.

But apparently, Ms. Spies, Prevent Child Abuse Iowa thinks poverty is child neglect – because it sure sounds like you just said it was!

Meanwhile, Klika himself sets up a straw man in a reputation-laundering article he and his PCAA colleagues co-authored.  On the surface, it’s a call for change. Klika and his coauthors bemoan the false “dominant narrative” blaming parents – without taking the slightest responsibility for the fact that their organization did more than almost anyone to build and maintain that narrative.  They acknowledge the ugly history of the Child Abuse Prevention and Treatment Act (CAPTA) – but endorse it anyway.  Then they minimize the need for the only change they mention that would reduce the system’s power –narrowing definitions of “neglect.”  They even imply that it would be harmful to narrow the scope of family policing until a giant, alternative “child and family well-being system” is fully up and running.

This is, again, just a laundering of the argument the child welfare establishment has made for decades: “Sure we’d like to eradicate poverty but until that happens we need to take away all those kids!”  In the new version, Klika & Co. write about their “child and family well-being system,” knowing full well that massive amounts of new funding are not forthcoming.

While it would be wonderful if Americans could be persuaded to spend huge amounts to create such a system – provided it was voluntary, community-run and entirely separate from the family police -- one does not need to eliminate poverty, or create a giant parallel bureaucracy, or even spend huge amounts of additional funds wisely in order to safely reign in the family police. 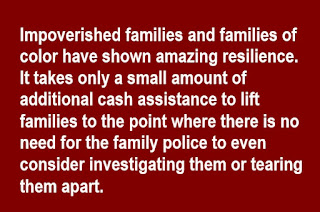 Impoverished families and families of color have shown amazing resilience.  It takes only a small
amount of additional cash assistance to lift families to the point where there is no need for the family police to even consider investigating them or tearing them apart.  The funds for that are readily available: All we have to do is transfer some of the billions now wasted on foster care.

But not one of these huge organizations is willing to support changes in federal funding that would require that – or even allow states to do it voluntarily.  Not one has embraced any change that would actually diminish the police power of “child welfare.”  Not one has truly embraced reforms that would bolster due process for families.

But Prevent Child Abuse America and the other groups we’ve spotlighted in this series will never go near an agenda like that.

Read all the posts in this series as a single publication on our website here.

Posted by National Coalition for Child Protection Reform at 3:17 AM