High-quality family defense dramatically shortens foster-care stays with no compromise of safety. That means thousands of children are trapped in foster care far longer than necessary.

This new evidence comes at an important time: A change in a federal policy manual means that child welfare agencies now can get reimbursement for half the cost of providing legal representation for children and families in eligible foster-care cases.

When parents are caught in the net of a child protective services agency they have no constitutional right to a lawyer.  So whether families too poor to afford a private attorney (which is, of course, almost all of them) get legal representation depends on where they live.  Even when there’s a lawyer, it’s usually an overworked public defender or “panel attorney” with an enormous caseload who either just met his or her client five minutes before the first court hearing or wasn’t appointed until after that hearing, when it’s often too late. In most of the country most of the time, families up against CPS are, literally, defense-less. 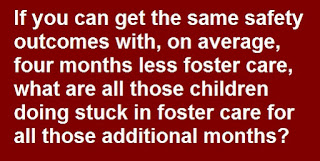 But New York City is an exception.  In New York City most families get a defense team. In addition to a lawyer there’s a social worker who can come up with alternatives to the cookie-cutter “service plans” often demanded by child protective services agencies. And often there’s a parent advocate – a parent who has been through the system herself and can help guide the client.  The whole team works for an institutional provider that can offer further support.

It began as a pilot project, but the proportion of families represented this way has grown steadily.  That created an opportunity to do the most careful, comprehensive study yet of this kind of representation.  It was published this week in Children and Youth Services Review.  NCCPR’s President, Prof. Martin Guggenheim, is a co-author.

For a child, especially a young child, that’s a very long time.  For an infant, it’s nearly one-third or more of her or his entire life.  And children experience time differently from adults – it passes more slowly.

A lot of needless foster care

All this also tells us something else: A whole lot of foster-care is unnecessary.  If you can get the same safety outcomes with, on average, four months less foster care, what are all those children doing stuck in foster care for all those additional months? 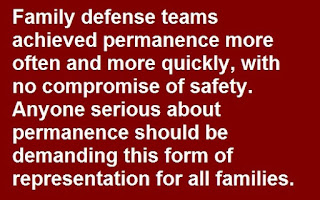 The places where these children wound up, once freed from foster care, are strikingly similar. For both groups seven percent of the children were adopted, three or four percent went into guardianship arrangements, and another three or four percent “aged out” of the system with no permanent home.  But while only 60 percent of those with conventional representation were reunified after four years, 65 percent of children with defense teams were reunified.  And while 26 percent of those with conventional representation were still trapped in foster care after four years, the figure for those whose families had a defense team was 21 percent.

So it’s time for those in child welfare who claim their Holy Grail is permanence to prove it.  Family defense teams achieved permanence more often and more quickly, with no compromise of safety.  So anyone serious about permanence should be demanding this form of representation for all families.

Even better outside New York City?

All these results are likely to be even better in most of the rest of the country.  In part because the City’s Administration for Children’s Services knows it won’t get a “free ride” in court, it’s shown far more restraint than most jurisdictions when it comes to taking away children, and it holds proportionately fewer in foster care than most places.  So the results almost certainly would be even more dramatic if all families got this sort of representation in, say, Philadelphia, which takes away children at the highest rate among America’s big cities.  The results would be more dramatic still, of course, in places where poor people don’t get lawyers in these cases at all.

And yes, these places could afford it – in fact, it would be a bargain. The study estimates, conservatively, that if all families in New York City received this form of representation it would reduce foster care costs by $40 million per year.

But what about entries?

The place where the different form of representation didn’t show a statistically significant difference also is instructive.  Team representation did not appear to reduce initial entries into care.  But that’s almost certainly for one simple reason: The defense team didn’t get there in time.

Although New York City shows more restraint than most places in its overall rate of removal, ACS has one nasty little habit that sets it apart in an ugly way: It rushes to invoke it’s power to tear apart families in “emergencies” even when there’s no emergency.  This means the ACS caseworker simply takes away the child entirely on her or his own authority.  They do this in nearly half of all removals.  By the time the lawyer is appointed, the child already is in foster care.

At one time, one of the New York City providers of team representation, the Center for Family Representation, actually had a grant for a pilot project to intervene before that initial removal decision was made.  They avoided removal in 38 of 48 cases.

So the next experiment should be to restore programs like that and see what they can do, compared to conventional representation.
Posted by National Coalition for Child Protection Reform at 4:30 PM