A Washington Post columnist is horrified – and rightly so.

In what is, in many ways, a very good commentary, Post opinion columnist Alyssa Rosenberg pulled it all together: from Tucker Carlson’s suggestion that family policing agencies (aka “child protective services”) investigate parents who make their children wear masks (which never happened) to Texas Gov. Greg Abbott unleashing the family police against transgender kids and their parents (which did happen) to Florida Gov. Ron DeSantis’ threat to unleash the family police on parents who take their kids to drag shows (which might happen).

She ties all these examples together and, rightly, condemns how some on the far right are exploiting the vast power of the family police, doing enormous harm to children in the process.

But two crucial pieces are missing.  One I’ve cited before: the fact that this vast powerful apparatus now exploited by the Right was largely created and remains largely supported by the Left.

So Rosenberg warns that

Even conservative parents who regard drag performers with horror should be wary of hurling themselves down this slickest of slippery slopes.

But there is no comparable admonition to my fellow liberals – something about how when you build a system that runs roughshod over due process in the name of “child protection,” when you abandon everything you claim to believe in about civil liberties as soon as someone whispers the words “child abuse” in your ears, you’ve already hurled a whole lot of people – mostly poor and nonwhite – down “the slickest of slippery slopes.”

And that brings me to the second problem with Rosenberg’s column: The tone of surprise; the idea that somehow these abuses are something new.  But, as I noted in this column for The Imprint, they’re only new if you’re white and middle-class.

That’s why, as I’ve noted before on this blog, whenever I read columns like Rosenberg’s I think of some Doonesbury cartoons from 1973.  They concerned what Americans came to call the “secret bombing” of Cambodia.  But, as Garry Trudeau pointed out, it wasn’t a secret to the Cambodians.

Now, white middle-class journalists are discovering the “secret” power of child protective services and how easily it is abused.  But if you’re not white and you’re not middle-class, there’s nothing secret about it at all.

In fact Black and Native American advocates and scholars have been trying to tell white middle-class journalists about it for decades.  Prof. Dorothy Roberts of the University of Pennsylvania, a member of NCCPR’s Board of Directors, just wrote a book called Torn Apart: How the Child Welfare System Destroys Black Families--and How Abolition Can Build a Safer World.  But that’s her second book on the topic.  The first, Shattered Bonds: The Color of Child Welfare was published 20 years ago.  Scholarly work documenting the class bias in “child welfare” and the confusion of poverty with “neglect” goes back at least to the 1970s.

But until very recently, with rare exceptions, the response in American newsrooms has ranged from indifference to hostility.  Just last year Report for America fellows wrote more than 10,000 words about foster care in West Virginia, which tears apart families at one of the highest rates in America.  But not one of those words came from a birth parent whose child was torn from her or a lawyer for such a parent.  Such parents, overwhelmingly poor, were simply deemed too subhuman even to speak to. 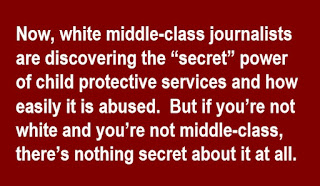 Or consider the entire false narrative about how COVID would lead to a “pandemic of child abuse” – a narrative suggesting that as soon as overwhelmingly middle-class disproportionately white “mandated reporters” were forced to avert their eyes, overwhelmingly poor, disproportionately nonwhite parents would unleash terror against their own children.  That narrative spread right in the middle of what was supposed to be a racial justice reckoning.  As the authors of a study debunking that narrative point out, one of the worst offenders was The New York Times.  The Washington Post was no better (though in fairness, if there’s one thing we’ve learned about the Post newsroom lately, it’s that it’s not a monolith :-))

And now we have Rosenberg’s column.  Consider the examples she cites concerning other family police excesses:

People have called CPS on parents for letting children play alone in the backyard, for the sin of being a recovering addict whose child was born with a rare medical condition, even for urging a hungry child to learn how to use a can opener.

Like so many other reporters before her, there is no indication that, as she condemned the abuses of Abbott and DeSantis, Rosenberg stopped to think: “If this is how they can treat white, middle-class families …”

to whip up false moral panics over drag queens or covid caution — to subject parents and children to investigation as a form of gleeful political point-scoring — is outrageous.

She’s right.  But here’s what else is outrageous: to not even mention that these same agencies of unchecked government power have been turned against poor and nonwhite families in the same way pretty much forever.

Posted by National Coalition for Child Protection Reform at 3:14 AM