Foster care in Washington State: Selfish foster parents, and the child welfare agency chief who panders to them 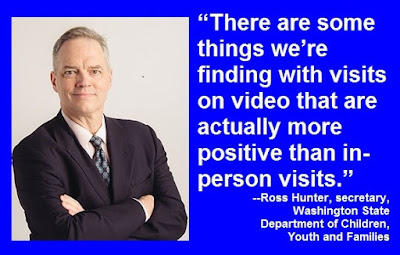 Every time I think a child welfare agency can’t sink lower in its response to COVID-19, another agency with the word “children” in its name steps up to take the worst-response-in-America challenge.

Today's candidate: The Washington State Department of Children, Youth and Families.  Thanks to a story from the online news site Investigate West, and an interview DCYF Secretary Ross Hunter did with the Seattle Times, we now know this:

● Hunter effectively admits he cut off all in-person visits between foster children and their parents largely to appease foster parents who, though asked to do no more than letter carriers and grocery clerks, are threatening to quit.

● Hunter may have felt pressured by a petition posted by an anonymous Washington State foster parent that got nearly 300 signatures. The petition is striking for its cruelty, and well worth reading in full.

● Hey, don’t worry, Hunter says. “There are some things we’re finding with visits on video that are actually more positive than in-person visits.”  Yes, he really said that. 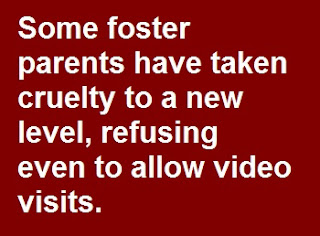 ● But, Investigate West found, Hunter’s agency isn’t even keeping its promise to provide all impoverished parents with the technology they need for video visits.

● And some foster parents have taken cruelty to a new level, refusing even to allow video visits.

● Hunter’s agency also claims it’s just following orders – from Gov. Jay Inslee.  But Inslee’s office says his COVID-19 orders still allow in-person visits, on a case-by-case basis.  In fact, says a spokesman, that’s how it should be done.  A reading of the actual order confirms as much.

● Hunter gives away his game when he says that, were the pandemic to continue for six months “I would go figure out how to make [in-person visits] practical.”

This reveals, at best, disturbing lack of concern for how children perceive time.  Six months is a lifetime for a newborn, a quarter of a lifetime for a toddler – and, for them, it feels like an eternity.  That’s part of the reason that the younger the child the greater the trauma of separation. And of course, these also are the very children for whom video visits work worst.

So, if you say you can figure out how to make in-person visits work after waiting six months, Mr. Hunter, you should be able to do it right now.  But apparently pandering to some Washington State foster parents is more important.

● The story is a notable improvement for Investigate West, which up to now has served as a de facto public relations factory for the state’s foster parents.  But the story still barely acknowledges the enormous psychic trauma cutting off visits inflicts on children.  And it accepts the view of foster parents that any and all in-person visits are extremely dangerous.

Visits should be determined case-by-case

No one is saying all in-person visits should continue. In some circumstances they are unsafe, and in some cases foster parent fears are reasonable.  But there is no need for a wholesale ban on such visits, and indeed, like Gov. Inslee, top federal child welfare officials specifically recommend against such a ban. 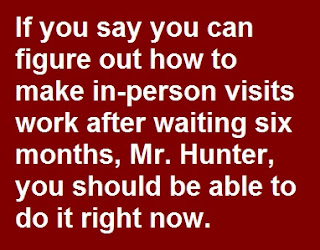 Infectious disease experts say that often families still can visit each other.  And many of the assumptions about visits always being unsafe are based on doing them the same old way, supervised in crowded offices. There are other alternatives.  But foster parents aren’t going to extend themselves if they think visits are just a favor for birth parents, and they hate the birth parents, as is apparent in that foster parent petition.

The “shortage” that isn’t

Hunter's desperation to appease foster parents is due to a so-called “shortage” of such parents. But, contrary to what DCYF and Investigate West repeatedly claim, Washington State doesn’t have too few foster parents. Washington State has too many foster children. The shortage is artificial, the result of decades of tearing apart families at rates above the national average when rates of child poverty are factored in, and far above the rate in states that are, relatively speaking, models for keeping children safe. 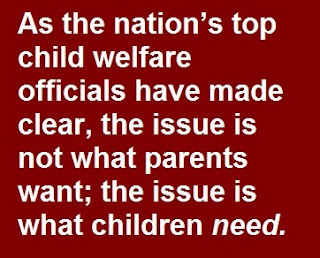 What no one seems to recognize, not the fearful foster parents, not Hunter, and not Investigate West, is who is being hurt most by all of this. The issue is not, as all of these parties suggest, the rights of parents vs. public health.  As the nation’s top child welfare officials have made clear, the issue is not what parents want, it’s what children need.

For the child, “It is not merely a matter of longing for contact,” write Jerry Milner, Associate Commissioner of the Children’s Bureau in the Department of Health and Human Services and his Special Assistant, David Kelly. “It is a matter of healthy brain development, maintaining critical bonds, and prevention of trauma that can persist for generations.”

And that brings us to that foster parent petition.  At one point the anonymous author says:

They say what about the bio parents who will miss [their children]? I say to this. [sic] They are the ones who made the choices which in turn lead [sic] to losing their children in the first place. They should not be worried about missing visits at this time.

Even were that true – and much of the time it is not – the anonymous foster parent apparently thinks that because she or he has such contempt for birth parents (note the patronizing, dehumanizing description of them as “bio parents”) their children do, too.  That’s not how child development works.  If a young child gets the message from a foster parent that their own parents are contemptible human beings – or worse – s/he is likely to think: “They are horrible and they made me, so what does that make me?”  Why is Washington State tolerating foster parents who broadcast such messages?

As Milner and Kelly make clear, almost always, children in foster care desperately need contact – including touches and hugs – from their parents.

What the anonymous foster parent is saying is almost exactly what the Trump Administration said about the kids they caged at the Mexican border: It’s the parents’ fault, they shouldn’t have crossed the border.

That’s no reason to keep kids in cages – and alleged failings by the parents are no reason to deprive their children of visits.  Anyone who heard the cries of the children in detention on the border should understand this.  How can anyone be trained and licensed to be a foster parent in Washington State and not know this?  Why tolerate foster parents who are supposed to work with birth parents, but clearly loathe them – and can’t see past that loathing to do what’s best for the children?

There also is an underlying hypocrisy – and racial and class bias – in some of the foster parent fears.  This can be seen in the rush by some to cut off even video visits.

It can be seen even more clearly at the conclusion of the Investigate West article.  It ends with the story of noble foster parents who are “putting their health on the line” and “risk[ing] coronavirus exposure” to arrange in-person visits for their foster children – two such visits, in fact, each involving at least seven people, adults and children.  The visits even took place in the foster parents’ own home!

But these were not visits with those at-worst-evil-at-best-sick-always-suspect- overwhelmingly-poor-disproportionately-nonwhite-birth-parents. No, these were visits with fellow white, middle-class foster parents preparing to adopt the children this couple had taken in on a short-term placement.