The story was a searing expose of ill-treatment visited upon families by a child protective services agency. It told of families repeatedly being harassed, threatened and treated with disrespect.

Did I say families? Sorry, I meant mostly white, middle class foster families.  Because for the online news site Investigate West in Washington State, they have been the only families who really counted.

The story dealt with repeated acts of alleged retaliation by the Washington State Department of Children, Youth and Families against foster parents who dared to challenge the agency.  But apparently, in the entire 4000-word story, it never occurred to any of those foster parents, nor to the reporter, to pose one simple question:

The state really needs foster families. If this is how they are treated, how do you think the agency treats birth families?

For Investigate West, and many other news organizations, the real answer is: Who cares?

They are more subtle about it, more genteel (and more grammatical) than the  crude, cruel petition posted by a Washington State foster parent demanding a wholesale cutoff of visits between foster children and their parents due to COVID-19 (something discussed in detail in the previous post to this blog). But the message is similar: Birth parents, overwhelmingly poor, disproportionately nonwhite, are essentially so subhuman they’re barely even worth speaking to.  Sure, they may not be evil, but they’re all sick, sick, sick! If they’re ill-treated, they brought it on themselves.

Investigate West also presents as fact the claim that there is a shortage of foster parents in Washington State.  But Washington State doesn’t have too few foster parents, it has too many foster children – because it tears apart families at a rate well above the national average when rates of child poverty are factored in.  Investigate West also accepts at face value claims about child welfare and substance use.  Once again, they shouldn’t.  And they’ve bought into the conventional wisdom about the supposed need for more group homes and  residential treatment. Again, a mistake. 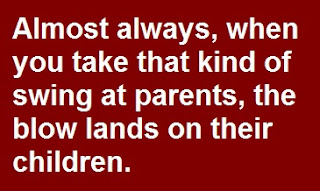 The problems with the attitude reflected both in the petition and in much of Investigate West’s reporting are legion, but here’s the most important: Almost always, when you take that kind of swing at parents, the blow lands on their children.

Most recently, those blows come in the form of states, including Washington, cutting off all in-person visits between foster children and their parents.  Wholesale cutoffs of visits, as opposed to case-by-case decisions, are contrary to federal recommendations, and are not necessary to curb COVID-19.

In fairness, we know about Washington State’s appalling behavior in large part thanks to a story from Investigate West.  Those failures are discussed in detail in the previous post to this blog.

This most recent story is a real improvement. This time, two birth parents actually are quoted – and some parents’ attorneys are included.  The federal guidance is noted. The story also exposes DCYF’s false claim that, in banning all in-person visits, the agency is just following orders from Gov. Jay Inslee. And it exposes DCYF’s failure even to provide the necessary technology so all foster children can have video visits with parents too poor to afford it themselves.

It’s also the case that, when it comes to the journalism of child welfare, there is far worse out there.  This most recent story, and the general output of Investigate West, are worth a close look precisely because it is so typical.

Flunking the “balance of harms” test

As with so much about both child welfare and the journalism of child welfare, the story flunks the “balance of harms” test.

The story plays up the serious and real risks of coronavirus, without also discussing the enormous risk to children posed by the trauma inflicted when visits are cut off.  In contrast, this story form the Chronicle of Social Change gets it right.  Here’s some of what parents said:

It breaks my heart that I can’t see my child right now.  I can’t hold her. I can’t comfort her when she’s getting frustrated.

She sees me on the screen and then she’s looking around to see if I’ll pop out. She’s reaching out to me, she wants to grab me but she can’t. She tries. It’s a very unbearable thing.

My kids are hurt, they’re crying. They don’t understand. My daughter is thinking we don’t want to see her.

You won’t find that in the Investigate West story.  Instead, the deck is further stacked by suggesting the issue is a matter of public health vs. parents’ rights. Thus we are told that:

But the real issue is whether foster children have the legal right to see their parents in person. 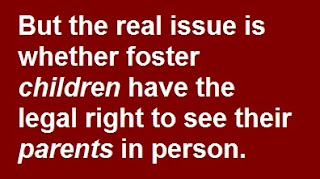 A vast majority … of the families that are in the dependency system are actually struggling with the effects of poverty and structural racism.  These families are struggling, but they’re not bad parents. They don’t have less love or less of a bond with their children.

If Chung pointed this out to Investigate West, they weren’t interested.

Fortunately, Ishisaka was. She wrote:

Poverty should not be punished with the lasting psychological and emotional damage of family separation. In the meantime, a one-size-fits-all visitation policy will not work.

In contrast, Investigate West presents the selfishness of foster parents as almost noble:

Foster parents got that public health message and they acted on it.

Or consider this paragraph, which combines subtle class bias with condescension:

State legal requirements make reuniting foster kids with the birth parents the paramount goal, in line with national recommendations. Yet those birth parents often are struggling with poverty, addiction or other issues that caused the state to remove their children in the first place. Often the hope of recovering their kids is what drives them to do better, child-welfare advocates say.

Strip away the genteel veneer and this is what Investigate West is saying: Not only is it perfectly o.k. to tear apart a family when parents are “struggling with poverty,” the removal is just the kick in the pants those lazy good-for-nothings need to “drive them to do better.”  There is no acknowledgement that some of “them” were doing just fine as parents until child protective services entered their lives.

What the headline writer knew 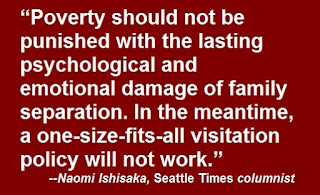 The Investigate West headline was simply: “Birth parents fight to visit kids in foster system during pandemic.”  But at Crosscut, another online news site which reprints Investigate West’s work, someone added a lurid “subhead,” (sometimes called a “deck”). It reads:

Seeing their children in person may put parents, as well as foster families and social workers, at risk, but can the state stop them?

I hope that wasn’t really the message Investigate West was trying to send.  If it wasn’t, then I hope they will go back and try again – and try not to see every child welfare issue almost exclusively through the eyes of white, middle-class foster parents.

In  an outstanding column urging child welfare systems to rise above their fears and their prejudices, Jerry Milner Associate Commissioner of the Department of Health and Human Services Children’s Bureau and his Special Assistant, David Kelly, wrote:

There will also be leaders and individuals who will learn from these difficult times and chart a new course, inspired by this stark reminder of our common humanity. For such leaders, this crisis is an opportunity to reorient our system.

Perhaps there also will be journalists inspired to chart a new course and reconsider the assumptions that have guided their coverage.