UPDATE, APRIL 18, 2020: lawmakers appear to have backed away from the most extreme version of the Vermont Anti-Hugging Bill. Less draconian - but still harmful and unnecessary - language now is under consideration.  And, as Allison Green, legal director of the National Association of Counsel for Children points out in her excellent testimony, there is no need for any limits on visitation to be added to state law. No other state is known to have done so.

COVID-19 is not, in and of itself, a danger that should keep families separated - no matter the duration of time. Child welfare practitioners have the skills, knowledge, and ongoing ethical duty to have meaningful, case-specific conversations, thoughtfully consider each family’s safety and needs, synthesize that information with up-to-date guidance from public health officials, and make recommendations accordingly.

● The child welfare agency in Bernie Sanders' home state proposes a Trump-like approach to family separation, just when children need their families most; it's a sick response to COVID-19 that dials up emotional child abuse.

● Unfortunately, Vermont is not alone – just more obvious about it.

Imagine for a moment that you are a small child.  Suddenly everyone you know and love has disappeared.  Where is Mommy?  Where is Daddy?  Where are my brothers and sisters? Even for a child who can speak, let alone an infant, comprehension is almost impossible – it’s an experience akin to a kidnapping.  There can be no real comfort other than once again experiencing the chance to look Mom or Dad in the eye, experience their touch and literally feel the family’s embrace.

To take all that from a child can leave scars to the psyche that last a lifetime.

Who would be so cruel?  There was what the Trump Administration did to children at the Mexican border, of course.  But surely that would never happen in open-minded, progressive Vermont.

In fact, it’s about to happen – if a proposal before the Vermont Legislature becomes law. A legislative committee has scheduled a hearing on the bill today (Tuesday, April 14 – via Zoom).

What should properly be called the Vermont Anti-Hugging Law would inflict emotional child abuse on a grand scale by imposing a wholesale ban on almost all in-person visits between children in foster care and their parents. The proposal runs contrary to guidance from the nation’s top child welfare officials.  And it is not necessary to stop the spread of COVID-19. 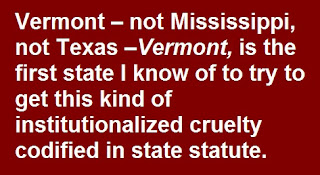 Other states and localities have done the same; the response to COVID-19 is the usual incoherent patchwork one expects from child welfare systems.  But Vermont – not Mississippi, not Texas – Vermont, is the first I know of to try to get this kind of institutionalized cruelty codified in state statute.

No Vermont legislator has put her or his name on the proposal yet.  But it’s pretty clear who wants it. Vermont Department of Children and Families Commissioner Ken Schatz told the House Human Services Committee that DCF previously tried – and failed – to get the state Supreme Court to impose such a ban.  Schatz said having the legislature impose the same ban he couldn’t get from the courts is “obviously something for you to consider” even though he made clear he was aware of federal guidance to the contrary.

To understand the depths of this cruelty, it’s urgent to understand who comes into foster care.  Contrary to the common stereotype, most parents who lose their children to foster care are neither sadists, brutes nor hopeless addicts. Far more common are cases in which family poverty is confused with neglect.

That helps explain why study after study has found that, in typical cases, children left in their own homes typically fare better even than comparably-maltreated children placed in foster care.  Yes, that also applies even when the issue is substance use.

Whenever we try to take a swing at “bad parents” the blow almost always lands on the children. For decades, more than almost any other state, Vermont has come out swinging.

Vermont tears apart families at the third highest rate in America, a rate nearly triple the national average, even when rates of child poverty are factored in.   Vermont’s rate of removal is vastly higher than states that have been proven to be, relatively speaking, models for keeping children safe.  That’s partly because the more workers are overloaded investigating the cases of children who don’t need to be taken away, the less time they have to find children in real danger.

Vermont has been an extreme outlier since long before the current opioid crisis. So either Vermont is a cesspool of depravity with three times more child abuse than the rest of America, or Vermont is taking away far too many children.

The reason the outcomes for foster children are so dismal is because the trauma of removal is so devastating.  Unlike what the Trump Administration did at the border, the people who work for Vermont DCF almost always mean well.  But that’s no comfort for children needlessly taken. They shed the same sorts of tears for the same sorts of reasons.

In fact their only comfort is the chance to visit with their parents – to be held and to be   Visits need to be maintained to the maximum extent possible not because it’s what parents want, but because it’s what children need.
hugged. 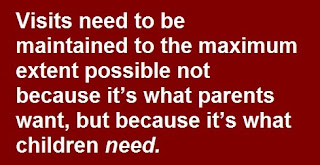 Yes, some case-by-case limits on in-person visits are necessary.  But, as the Children’s Bureau of the Department of Health and Human Services explains, visits are so important for children that courts should hold agencies like DCF accountable for maintaining them whenever possible and absolutely avoid blanket prohibitions of any kind – much less anti-hugging laws.

As I’ve noted before, that can be done safely. Here’s the guidance Dr. Jeanne Marrazzo, director of infectious diseases at the University of Alabama in Birmingham offered to The New York Times:

“Certainly, sick family should not visit,” said Dr. Marrazzo. “If you have vulnerable people in your family, or who are very old, then limit in-person contact.”

But if everyone in the family is young and healthy, then some careful interaction in small groups is probably OK. “The smaller the gathering, the healthier the people are to start with, the lower the risk of the situation is going to be,” she said.
In contrast, Vermont DCF wants a ban on all visits unless it can be proven that this would “irreparably damage any reunification goal…” Proving this is nearly impossible in the best of times.  Now, of course, as is true in many places, most court hearings in Vermont have been suspended. And notice that, under this law, irreparable damage to the child’s mental health is not even a ground for maintaining visits. That clearly is of no concern to Vermont DCF. 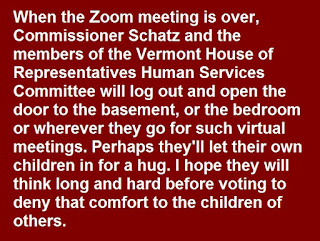 In a column for Youth Today last month I noted that all over America there are people who can’t stay home during the pandemic. Some always knew their jobs carried risks, others were, in effect, drafted into the fight, such as the people who deliver mail and groceries. And then there are the people who simply volunteer — like those bringing meals to the elderly.

DCF, on the other hand, wants to run away and effectively abandon the state’s most vulnerable children.  The response of the Vermont Department of Children and Families to COVID-19, like the response of many other child welfare systems, is sickening.

When the Zoom meeting is over, Commissioner Schatz and the members of the Vermont House of Representatives Human Services Committee will log out and open the door to the basement, or the bedroom or wherever they go for such virtual meeetings.  Perhaps they'll let their own children in for a hug.  I hope they will think long and hard before voting to deny that comfort to the children of others.
Posted by National Coalition for Child Protection Reform at 11:00 PM