With so much news, I’m adding a second round-up this week: 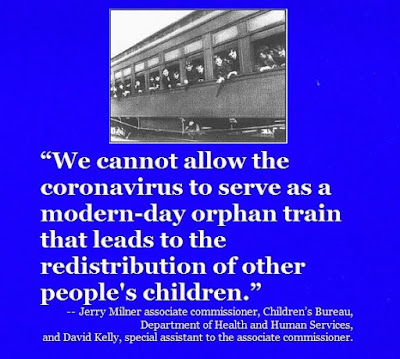 ● First and foremost, I hope everyone reads this clarion call from top federal child welfare officials. The message from Children’s Bureau Associate Commissioner Jerry Milner and his Special Assistant, David Kelly: NO, you should not ban all visits, NO, you should not delay reunification hearings, YES you must still make reasonable efforts to keep families together. Or as they put it: "We cannot allow the coronavirus to serve as a modern-day orphan train that leads to the redistribution of other people’s children.”  (And wait ‘till you read what they wrote about the so-called Adoption and Safe Families Act!)

● Milner and Kelly will be among the participants in an American Bar Association webinar today (Thursday, April 9) at 11:00 am Eastern on how child welfare should respond to COVID-19.

● In California, it looks like the courts have gotten the message.  The Chronicle of Social Change reports that the state’s Judicial Council has issued guidelines requiring some reunification hearings to go forward and prohibiting blanket bans on visiting.

● But they have not gotten the message in places such as metropolitan Seattle.  In an excellent column for the Seattle Times, Naomi Ishisaka quotes attorney S. Annie Chung:

A vast majority … of the families that are in the dependency system are actually struggling with the effects of poverty and structural racism.  These families are struggling, but they’re not bad parents. They don’t have less love or less of a bond with their children.

Poverty should not be punished with the lasting psychological and emotional damage of family separation. In the meantime, a one-size-fits-all visitation policy will not work.

● And speaking of structural racism: In story after story, “experts,” journalists and headline writers suggest that as soon as white middle-class professionals don’t constantly have their “eyes” on overwhelmingly poor disproportionately nonwhite children, those children’s parents will unleash their savagery upon those children – because, you know, “they” are not quite as civilized as “we” are.  One district attorney even suggested the parents were like “violent gorilla[s].” I write in Youth Today about how COVID-19 surfaces child welfare’s ugly biases about race and class

● And finally: April Lee is Peer Parent Advocate in the Family Advocacy Unit (FAU) of Community Legal Services of Philadelphia.  She’s also a poet, who does readings throughout Philadelphia.  Here’s a poem she wrote about families separated by foster care in a time of pandemic – and the lawyers fighting to bring them together.