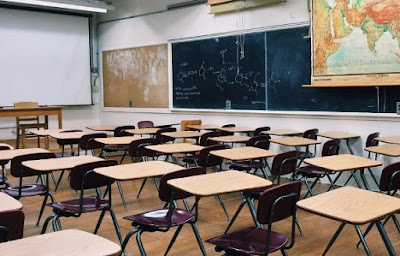 Are you a parent who just can’t handle the demands of your own work, the stress of coronavirus and educating your child from home while schools are closed?

If you’re middle-class you can get indulgence, sympathy and helpful hints. Your kids can “play Fortnite for the next eight hours.”

If you’re poor you can get a caseworker at the door investigating you for “educational neglect.”

All over America, parents are finding out just how hard it is to be a teacher – particularly when it’s your own child and everyone has to master new technology and new lessons at the same time.

The New York Times feels your pain.  In a story filled with examples of middle-class parents struggling to cope – or even giving up – the story declares:

With teachers relegated to computer screens, parents have to play teacher’s aide, hall monitor, counselor and cafeteria worker — all while trying to do their own jobs under extraordinary circumstances. …

Kindergartners need help logging into Zoom. Seventh-graders need help with algebra, last used by dad circa 1992. “School” often ends by lunchtime, leaving parents from Long Island to Dallas to Los Angeles asking themselves the same question: How bad am I if my child plays Fortnite for the next eight hours?

If you’re middle class, not bad at all. In fact, you can give up entirely! Again, from the story:

The litmus tweet of the moment came from Sarah Parcak, an archaeologist at the University of Alabama at Birmingham.

“I told our son’s (lovely, kind, caring) teacher that, no, we will not be participating in her ‘virtual classroom,’ and that he was done with the 1st grade,” she wrote on Twitter in early April. “We cannot cope with this insanity. Survival and protecting his well being come first.”

Yes, that’s right – if you’re white and middle class you can announce to the whole world that your child is “done with first grade” and not have to worry. It’s similar to how middle-class moms can brag about using marijuana.

To the surprise of, I’m guessing, pretty much no one, whether its pot or education, it doesn’t work that way if you’re poor. 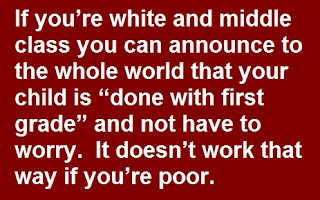 Shortly after New York City schools closed, I started hearing rumors that schools were actually calling in “educational neglect” reports on parents when their kids didn’t “show up for class” online – because, after all, every child living in poverty has immediate access to all the necessary
technology, right?  And what could be better for kids and families in this time of stress than a caseworker from the city’s Administration for Children’s Services caseworker showing up at the door?

Thanks to some good reporting from Eileen Grench at the online news site The City, now we know: The rumors were true.  From Grench’s story:

Joyce McMillan, family advocate at Sinergia and founder of the Parent Legislative Action Network, says mothers she works with in homeless shelters have been threatened by children’s school staff with a call to the child neglect hotline — even as they struggled to get diapers, much less share internet limited shelter hotspots.

“If we know this is the population of people that we’re working with,” asked McMillan, “why are you using informants if you know [families] can’t comply?”

The city’s Department of Education (DOE) says teachers and others are supposed to check first to see if the problem is lack of technology. But teachers are mandated reporters – subject to severe penalties if they don’t report.  So it’s easier – for them – to just call in the report.

Don’t worry, though, says a spokesperson for DOE, “If an investigation finds a report was due to lack of access to technology, it will be dismissed.”  Right. So all you and your children have to endure is the stress of a child abuse investigation – and possibly increased risk of exposure to COVID-19, depending on exactly how much of a home inspection is required.

And, of course, there is no exemption for parents who just can’t cope, are too tired, or just decide it’s not worth it – like those middle-class parents in the Times story who get a free pass even when they do have the technology. The City quotes attorney Gabriel Freiman of Brooklyn Defender Services:

“People are sort of being told two things, which is: ‘It’s OK to do the best you can. You know, you’re not being expected to do more than what’s possible.’ And also: ‘If you can’t do the things that were requested, do you know you’ll get a report against you called in.’”

The result, he says, is compounded stress in a crisis: “That kind of increased anxiety, in my opinion, is not good for situations that are already incredibly tense for families.”

All this is on top of the fact that there is abundant evidence that “educational neglect” is so useless when it comes to finding actual child abuse, so harmful to children, families and to education, and so easily abused, that it probably should not even be something that can be reported to child protective services at all.

Meanwhile, back at the Times, the story offers some advice for stressed-out parents. According to the story:

[P]arents should take it easy on themselves on days when things don’t go as planned.

“Are your kids killing each other, or have you killed your child?” said Kathryn Hirsh-Pasek, an education researcher and a senior fellow at The Brookings Institution. “Is there anything they’re eating that resembles healthy food in between the chocolate and sugar? If the answer is yes, give yourself a break.”

I think the “yes” applies only to the second part.  But in any event, the advice should come with a warning label: Do not try this at home – if you’re poor.

Poor people can never give themselves a break. They can never take it easy on themselves. Because no one else ever will.
Posted by National Coalition for Child Protection Reform at 11:00 PM