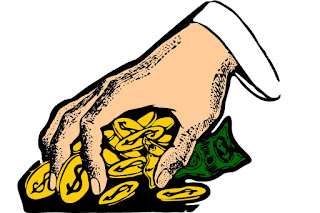 Even as almost everyone else sacrifices, federal legislation gives a huge accidental boost to foster care funding.  But the child welfare establishment still isn’t satisfied. They want to scarf up billions more.  Some of what they’re asking for makes sense.  A lot does not.

Most of what was good in the funding request discussed below was stripped out of the actual bill introduced by several Democratic Senators. Now there's $1.5 billion - all of it funneled through CAPTA.  And, of the $500 million that will be funneled through the worst part of CAPTA, Title I, much of it is specifically designated for child abuse investigations.

There's even a provision providing federal funds to make it easier for states to bypass the minimal due process protections for families in current state laws and force children into hidden foster care with no due process at all - as Oregon is doing now.

In a time of pandemic everyone has to sacrifice – except, of course, the foster care-industrial complex. Big Child Welfare already has reaped a big windfall, and they’re greedily scrounging for billions more.

The windfall may well have been an accident. Explaining how it happened requires another of those trips into the weeds.

The federal government throws billions of dollars at trapping children in foster care through an entitlement program called Title IV-E.  That funding stream has a variety of subsections.  For some of those subsections – including the good ones, such as paying for the cost of lawyers for children and parents – the federal government will simply reimburse the states for half the cost for every eligible child.  (Eligibility is an entire different patch of weeds – you can read about that here.)

But when it comes to IV-E funds for holding children in foster care, the reimbursement rate varies from state to state.  It ranges from 50 percent to more than 73 percent. 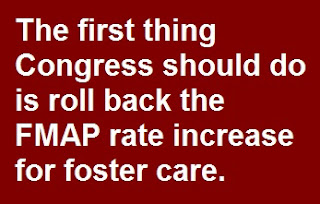 When Congress passed the Families First Coronavirus Relief Act it raised the FMAP by 6.2 percentage points – not percent, percentage points.  That’s a good idea for Medicaid.  It’s a bad idea for foster care. Now a state that was getting back, say, 60 percent of foster care maintenance costs for every eligible child is getting 66.2 percent – nearly two-thirds of the cost.

This exacerbates the financial incentive that sometimes exists to use foster care instead of safe proven alternatives that cost less in total dollars, but may cost a state more because it often has to pick up the entire tab.

So the first thing Congress should do is roll back the FMAP rate increase for foster care, maintaining it only for Medicaid and for IV-E funding that can be used for prevention under the Family First Act.*  I’ll discuss what to do with the savings at the end of this post.

Beyond the FMAP windfall

Let’s start with the good parts. They propose $500 million $1 billion more for the Promoting Safe and Stable Families Program, which I discuss in detail at the end of this post.  There also is a call to spend $500 million to help foster youth “aging out” of the system. Granted, this is largely funding to try to undo some of the damage the system did to these young people in the first place, but we owe it to those youth to try. There also are proposals for small increases to programs to help kinship foster parents and to improve the functioning of juvenile courts.

The bad parts have to do both with what is funded and how it’s funded.  Fully half the $3 billion would be funneled through the so-called Child Abuse Prevention and Treatment Act – an odious little law which this proposal would turn into an odious bigger law.

CAPTA codifies everything wrong with America’s approach to child welfare. CAPTA encourages the failed system of mandatory reporting. CAPTA encourages the use of Court-Appointed Special Advocates, a program that studies have found to be a failure, and which entrenches racial and class bias in child welfare. CAPTA encourages blacklists of alleged child abusers that are far too easy to get on and far too hard to get off – causing enormous additional hardships for impoverished families. And CAPTA encourages laws and policies that terrorize pregnant women away from seeking prenatal care, and inflict needless foster care on children during precisely the time in their lives those need their families most – their infancy. 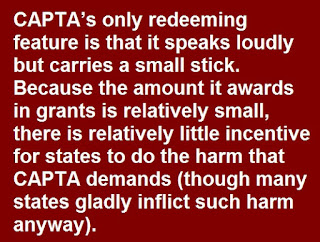 CAPTA’s only redeeming feature is that it speaks loudly but carries a small stick.  Because the amount it awards in grants is relatively small, there is relatively little incentive for states to do the harm that CAPTA demands (though many states gladly inflict such harm anyway).

By proposing to funnel $1.5 billion in additional funds through CAPTA, CDF and other groups are increasing the temptation for states to do things like enact “Plan of Safe Care” provisions – classic Orwellian child welfare-speak for harassing pregnant women who do things such as smoke marijuana to ease the pain of labor or take legally-prescribed medication as part of treatment for opioid addiction.  Bolstering CAPTA also impedes efforts to, at long last, reconsider failed approaches such as mandatory reporting laws.

There are, however, ways to salvage the additional spending by channeling it into better alternatives.

CAPTA has two titles. Title I is the more troublesome.  The demands to do all the cruddy stuff CAPTA requires apply to getting money under Title I.

As for what states can get, what is so striking about the programs eligible for funding is what a hot mess this whole title has become.  It’s an incoherent jumble of projects that appears to have been cobbled together based on who could get the sympathetic ear of a powerful member of Congress for their pet program. 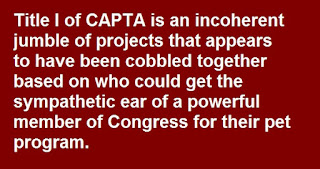 There’s a huge list of topics eligible for “research” grants.  Most of them are likely to accomplish nothing except help social work professors get tenure.  At least one is so narrow it reads as though it were written just to accommodate someone’s specific proposal.

This title also includes grants for various services. There are a couple of good ones, but also a lot of the  usual “help” that primarily helps the helpers and can actually make things worse for families.

CDF wants to pour $500 million more into this title alone.  That would be a big mistake. Most of that money almost certainly would go to a combination of pointless research and further bloating the child welfare surveillance state.  If the only choices are spending $500 million on Title I of CAPTA or not spending the money at all, the less detrimental alternative is not to spend the money at all.  I will suggest other options below.

CDF wants to spend another $1 billion on Title II of CAPTA. That is less problematic. States can get Title II funding without having to comply with all the awful requirements to harm families that are required to get Title I funds.  And the types of programs eligible for this funding include some that are marginally useful and, it appears, none that does actual damage.  So Title II passes what I call the Hitchhikers Guide to the Galaxy test: It’s mostly harmless.

But the act of pumping more money into any part of CAPTA bolsters its prominence and the influence of its ugly mandates. So it’s still a bad idea to funnel money through CAPTA.

There are ways to use $2 billion that really will help prevent child abuse.  The best approach of all would be to just send cash.

Over and over we’re reading about how supposedly, because COVID-19 will plunge more people into poverty, they will take it out on their children.  And that, of course, is on top of the massive confusion of poverty with neglect even in normal times.

Given the extent to which the problem is poverty, you don’t suppose the solution might be – money?  As a matter of fact, yes.

Study after study has shown us the transformative power of cash, especially when social workers don’t get in the way.  So the best use of an extra $2 billion would be in the form of a fund targeted toward families considered most at risk of what the system calls “abuse” or “neglect.” Those funds could be used to provide emergency cash for things like child care, housing, and other basic necessities.    This kind of approach, known as flex-funds, is at the heart of the pioneering reforms that helped transform child welfare in Alabama.

Since Congress is not likely to go for that, the second best option would be, again, to put the money into the federal government’s only funding stream that is, mostly, geared to prevention and family preservation, not punishment and surveillance: the Promoting Safe and Stable Families Act (PSSF) which is part of a funding stream known as Title-IVB.

Those funds can be used for family support, family preservation, reunification and adoption.  But no, adoption can’t scarf up the whole pie; at least 20 percent of funds must be spent in each category – and, in fact, states have, on average divided the funding fairly evenly across the four categories.

Most notably, in the most difficult cases, where cash alone is not enough, both PSSF money and Family First money can be spent on the Homebuilders Intensive Family Preservation Services program.

The clearinghouse for determining if programs are sufficiently “evidence based” to get funding under Family First has given its highest rating Homebuilders.  Two other clearinghouses also have given the program high ratings. These NCCPR Issue Papers explain what Homebuilders is and the mass of evidence that it works

The very term “family preservation” was coined to apply to this program, which dates all the way back to 1974. It had the potential to transform child welfare.  For that very reason it was marginalized, thanks to a smear campaign by the child welfare establishment. Needless to say there is no mention of Homebuilders in CAPTA.

Still another good use for $2 billion would be a fund for drug treatment, with an emphasis on programs in which parents and children can live together, including in-home treatment.

Aside from simple payments of cash, it’s hard to imagine a better use for $2 billion in new child welfare spending than Homebuilders and drug treatment.

A chance to do better

The massive dislocations caused by COVID-19 are an almost unimaginable tragedy.  But this also is a chance to reimagine child welfare and make it better.

During an American Bar Association Webinar last week, Jerry Milner, who runs the Children’s Bureau in the Department of Health and Human Services, said that after the crisis is over “We’re not going to go back to normal – that’s good. Our normal wasn’t working.”  Said his Special Assistant, David Kelly: “This crisis is an opportunity to awaken collective compassion and better see ourselves in the families and young people we work with ... It's a defining moment; we can seize it."

It is a testament to the lack of courage, imagination and vision from the child welfare establishment that they have no interest in seizing the moment to make the system better.  All they can think of are ways to make the same lousy system even bigger.

*-According to CDF, Family First funding only gets a 50 percent match. It won’t be reimbursed at the FMAP rate until 2027 – one more illustration of the real priorities in American child welfare.
Posted by National Coalition for Child Protection Reform at 11:00 PM