Rubbing salt into children’s wounds: Why is this horrible child welfare practice illegal in New York – but perfectly fine in L.A.? 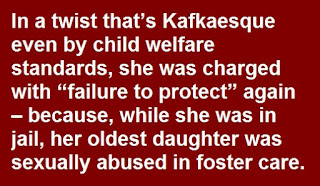 The story cites the case of Ingrid Archie.  She was charged even after she fled from her abuser, got a restraining order and moved to a domestic violence shelter. Nevertheless her children were taken – and she was jailed.  Then in a twist that’s Kafkaesque even by child welfare standards, she was charged with “failure to protect” again – because, while she was in jail, her oldest daughter was sexually abused in foster care.

The ways in which this all makes children less safe are legion – not least the fact that it discourages battered women from seeking help. They’re actually more likely to stay in abusive relationship for fear that if they seek that help, they’ll lose their children. Indeed, as reporter Angelika Albaladejo explains in her story, that fear is even exploited by abusers who sometimes threaten to turn their victims in to child protective services if they try to leave.

But there’s another harm as well.  As traumatizing as it is for children to be thrown into foster care, that trauma is actually worse when the child has witnessed domestic violence.  One expert called removing children under such circumstances “tantamount to pouring salt into an open wound.”

We know this because these experts testified in a landmark class-action lawsuit that got this horrible practice banned in New York City. NCCPR’s Vice President, Carolyn Kubitschek, was co-counsel for the battered women in the case, known as Nicholson v. Scoppetta. (Due to some odd legal twists and turns, the ban theoretically applies statewide, but I doubt it’s being enforced Upstate.)  You can read the expert testimony as summarized by the judge, the stories of the plaintiffs and the judge’s full, scathing 183-page decision on NCCPR’s website here.

Remarkably, though New York City’s child welfare system has plenty of faults, and indeed, may be backsliding on this issue, the Nicholson consent decree has significantly reduced the needless removal of children of battered mothers.

The reasons for LA’s failure

● New York City has a relatively strong family defender community, with aggressive institutional providers that fight hard for their clients.  They can fight, case by case, to make sure the city’s child protective services agency follows the consent decree.   There is nothing like it in Los Angeles.

● New York City has a mediocre child welfare agency chief and a mayor who, on child welfare, shows no courage.  But at least the City Council understands these issues and, particularly in recent years, has worked to hold the city child protective services agency accountable.  In contrast, Los Angeles has had a long succession of poor child welfare leaders, and the current one, Bobby Cagle, has a particularly poor track record.

And the Los Angeles County Board of Supervisors, which effectively functions as both the legislative and executive branch, may well be the worst governing body in America, with politicians seemingly in a never-ending race-to-the-bottom when it comes to demagoguery about child welfare.

All of this also explains why Los Angeles takes away children at a rate more than double that of New York City.

The issue is not all that complex

Although the Capital and Main article is outstanding, there are a couple of points with which I would take issue.

One is the idea that the rush to remove children in these cases amounts to “prioritization of the immediate safety of the child” – at the expense of all sorts of other harm to that child.  In fact, even that assessment is too generous.  What’s really being prioritized is the immediate “safety” of everyone from the caseworker to the agency chief; all of them terrified of leaving a child home and being blamed if something goes wrong.

In Los Angeles County in recent years, concerns over protecting children have come to a head after several high-profile murders of children at the hands of abusive parents generated public scrutiny of [the county’s child protective services agency’s] practices, and encouraged a more reactive response.

That is a polite way of saying: There’s probably a foster-care panic underway right now.

As for the child, she or he may well wind up less safe physically – as is illustrated by what happened to Ingrid Archie’s oldest child; an illustration backed up by the data on the widespread extent of abuse in foster care.  And that’s before we even get to the additional emotional trauma.

I also question the idea that all of these cases are unusually “complex” and workers need lots and lots of that all-purpose child welfare bromide: “training.”

Some cases undoubtedly are complex.  But these also are cases in which there’s a vastly better way to “prioritize the immediate safety of the child” that’s also pretty simple: Instead of making it the victim’s responsibility to flee and, even then, sometimes taking away the child, why not remove the abuser from the home?

As for training: Allow me to provide the entire training curriculum needed for this approach: 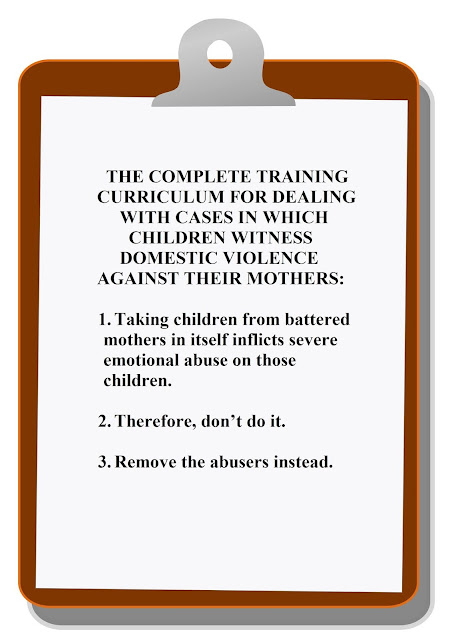