A huge, new study of Court-Appointed Special Advocates is out.  It was commissioned – and paid for – by a state CASA program.  It claims to have fixed the alleged methodological failings in other studies.  The results, straight from the study:


“Overall, children appointed a CASA have significantly LOWER odds than children without a CASA of achieving permanency.” [Emphasis added]


Compared to children not burdened with a CASA on the case, foster children with CASAs were:


● Less likely to be reunified with their own parents.


● Less likely to find permanence in the form of guardianship by a relative.


● More likely to “age out” of foster care with no home at all.

● The results are NOT due to the fact that CASAs are said to be assigned to “the toughest cases.” The researchers took extraordinary steps to account for that.

The findings are disturbingly similar to a devastating 2004 study of the program. If anything, the new findings are even worse.

Back in 2004, Youth Today revealed the results of the most comprehensive study done to that point concerning the most sacred cow in child welfare: Court-Appointed Special Advocates.

What could possibly go wrong?

Plenty, according to that 2004 study.  The study was commissioned by the National CASA Association itself, which thought it would show the world how successful the program is.  But it didn’t.  Instead, the study found that having a CASA assigned to a case prolonged the time children were trapped in foster care, and made it less likely that children would be placed with relatives instead of strangers – even though multiple studies have found kinship foster care to be far less harmful to children than what should properly be called stranger care.

CASA has an all-purpose excuse whenever a study doesn't find what CASA wants it to find:  Of course we got poorer results, they say, but that's only because we take on the toughest cases.  The findings, CASA claims, are due to "selection bias."  But the researchers who conducted the 2004 study took rigorous steps to avoid “selection bias” – that is, to be sure they adjusted for any differences in the circumstances of the children with and without CASAs.  Nevertheless, when the results didn’t go the way CASA wanted, National CASA blamed selection bias.  At the time, Youth Today concluded that National CASA’s efforts to spin the study “can border on duplicity.”

What National CASA did not do was commission another study.

And it’s a Texas-size study.  The researchers looked at outcomes for 31,754 children, far larger than any previous study.  Not only did Texas CASA commission the study, they also paid for it – and they chose the group that would do the research.  The researchers go on at length about how they’re confident they dealt with the "selection bias." problem. So no, the results are not because the CASAs dealt with tougher cases.

And those results are even worse than the results from the 2004 study.

If their own writing is to be believed, the Holy Grail for those wedded to a take-the-child-and-run approach to child welfare, is “permanence” – or, as they call it “permanency,” presumably because adding an extra syllable makes them feel more important.

There are actually good reasons for this. Part of the reason foster care is so inherently harmful is because it is impermanent. Children are first traumatized by being taken from everyone they know and love and then traumatized over and over as they are moved from foster home to foster home, sometimes emerging years later unable to love or trust anyone. 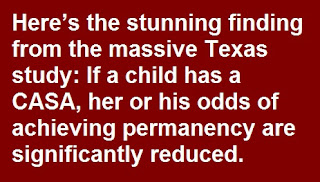 But there are many ways to achieve permanency. The best, of course, is not to tear children needlessly from their parents in the first place.  Second best is swift reunification.  Third best is allowing the child to live in the permanent custody of a relative instead of a stranger.  Fourth on the list is adoption by strangers.  That option has an honorable place in child welfare. Sometimes it is, indeed, the best option.

But when latter-day “child savers” (to use the term their 19th Century counterparts proudly gave themselves) talk “permanency” they’re typically not interested in the first three – they want to jump to option 4: adoption by total strangers; people with whom the child savers can identify because they are more likely to be of the same race and class.

But officially their standard of success is “permanency” – period.

As the Texas study notes:

The CASA program was designed to help children in foster care, and one way the program believes it accomplishes this goal is by getting children into safe, stable, permanent placements.” [Emphasis added.]

So here’s the stunning finding from the massive Texas study: If a child has a CASA, her or his odds of achieving permanency are significantly reduced.

It should come as no surprise that children with a CASA are 16 percent less likely to be reunified with their own parents. The racial and class bias that prompted one law review article to call CASA an “exercise of white supremacy” ensures this.

But the Texas study found that a child with a CASA is 20 percent less likely to find permanency in any form – and more likely to wind up with the worst outcome of all: “aging out” of the system with no ties to their own family and no permanent home with anyone else either.

Among those who do find “permanency,” children with a CASA are less likely to find that permanency with a relative, and more likely to find it with a total stranger through adoption.

The researchers acknowledge that their study is not an outlier, writing: “Our findings largely confirm the conclusions of prior research on CASA.”

The spin: Maybe permanency isn’t that important after all

As was the case in 2004, the dismal findings from the new study did not seem to please the study’s authors.  So they came up with all sorts of ways to spin those findings.

First, of course, they speculated that the lower rates of permanency might be because, with all that time to investigate, CASAs may have concluded that “a given placement is not a safe, stable, permanent option.”  But the study itself doesn’t measure whether any such conclusions are accurate.  The 2004 study found, however, that when CASAs prolonged children’s time in foster care and reduced the chances they would be placed with relatives this did nothing to improve child safety. (It also found, of course, that CASAs aren’t really spending all that much time on their cases.)

Then the authors of the new study seem to suggest that permanence may not be all it’s cracked up to be. They write:

While traditionally legal permanency has been the primary focus of the child welfare system there has been a recent shift by some toward a focus on wellbeing and social support outside of permanent placement.

The “some” in question seems to be the Texas CASA program itself, since the only support cited for this claim is a promotional publication from Texas CASA.  But if that's really what the researchers and/or Texas CASA believe you have to wonder: Why did they go to all this trouble to do a massive study of legal permanency outcomes if legal permanency isn’t really that important?

Then the researchers take it a step further, seeming to suggest that aging out might not be so bad.  They write:

Youth who are likely to age out of the child welfare system receive services to help prepare them for adult living and additional services after aging out of care, some of which are not provided to those youth who reach a permanent outcome before age eighteen.

Leaving aside the fact that the description of help to youth who age out is overly optimistic, this offers a wonderful insight into the mindset of the child welfare establishment. They seem to be saying: Youth who age out get help that youth placed in permanent homes don’t, so maybe it’s o.k. to just let them age out.

Quick: Can anyone think of a better way to fix this disparity?

Only toward the very end do the authors’ ever-so-gently raise the most likely reason for these awful results:

Another limitation of the present study is the lack of demographic information available about the CASA volunteers. CASAs’ age, experience, ethnicity, and socioeconomic background could influence their activities or their interpretation of what is in the best interest of a child. Without access to this information, we are unable to explore the influence of CASA characteristics.

First of all, this begs the question: Why didn’t they have access to this information?

More generally, we do know this information. Nationwide, according to National CASA’s own data, 84.4 percent of volunteers are white and only 19 percent are African-American or Hispanic/Latino.  (Among foster children only 44 percent are white and 44 percent are African-American or Hispanic/Latino). Things can get so ludicrous that the scandal-plagued program in Snohomish County, Washington, which has no actual Black CASA volunteers, used a stock photo from National CASA to portray one.

As for income, that can be reasonably inferred from the simple fact that you have to have enough time and money on your hands to be able to volunteer.

We can also get a sense of the outlook of CASA concerning issues of race and class by things like:

● The CASA chapter that held a fundraiser featuring a blackface act.

● The CASA chapter that fell apart over a simple request to try to become more diverse.

● The former CASA volunteer whose rants about the families he investigated read like a Donald Trump tweetstorm.

Links to details about all of the above can be found here.

The limits of CASA

None of this means that no child ever has been helped by having a CASA volunteer.  But the study findings indicate that children are more likely to be harmed than helped.  If a medicine were found to be more likely to make patients sicker instead of better, we know what would happen: It would be pulled off the market.

CASA might have a useful role to play in child welfare – if it were converted into strictly a mentoring program for foster children, without allowing these usually white, middle-class amateurs to tell judges where those children should grow up.

But in its current form, CASA should be pulled off the market.

It’s time for Congress, which helps to fund CASA, for the judges who appoint CASAs and for the well-meaning people in the programs themselves to stop.

Stop denying children the chance to live safely in their own homes.

Stop denying children the chance to live with their extended families.