Abuse of power: In New York City, hundreds of children thrown into foster care in so-called “emergencies” are sent back home within days or even hours – which almost always means there was no emergency

Removals that last a few days or less are long enough to traumatize a child but short enough to come up with better alternatives.


Video of the full City Council hearing discussed below is available here. The good part starts at 2 hours 21 minutes in.

We all know the classic party line from child welfare agencies: Hey, they tell us, we don’t take children, a judge has to approve everything we do, so there’s due process for families.

As it happens, in a column for Youth Today last week, I just cited New York City as an example of why this isn’t true.  At a New York City Council hearing last week, the evidence that the claim is false became even more compelling. 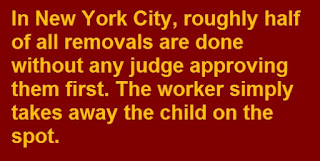 In New York City, roughly half of all removals are done without any judge approving them first – not even at a so-called ex parte hearing where only the city child welfare agency, the Administration for Children’s Services, makes its case. The worker simply takes away the child on the spot.

Nearly two decades ago, in a case brought by NCCPR’s Vice President, a federal appellate court found widespread abuse of the emergency removal power. But those abuses have continued under one ACS administration after another – causing enormous needless trauma for thousands of children.

The very act of taking the child first and going to court later further stacks the deck against families at that first court hearing.  That hearing usually is supposed to take place in roughly one to three days - though ACS has been known to stall.

And that makes a number ACS finally owned up to this week even more shocking: For months, ACS said it just didn’t have a way to count how many times, at that first hearing, judges say, in effect: “This case is a load of b.s.” and send the child home – or ACS simply admits as much – or, more likely, comes up with some way to save face and let the children go home.

For an example of such a case, and how it traumatized the children, listen to thisexcellent documentary from NPR’s LatinoUSA – in particular the section that starts at 17:05 in:

But at a City Council hearing last week, ACS produced a number.  ACS says that in City Fiscal Year 2018 20 to 25 percent of “emergency” removals were such non-emergencies that the children could go home at that very first hearing. 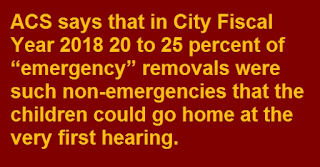 That’s roughly between 370 and 460 children torn from everyone they know and love, not knowing what would happen next, enduring a trauma that, if a child is young enough, is akin to a kidnapping - only to find that, as soon as someone other than ACS itself looked at the facts, they could go right home again.

(In fact the number of needless “emergency” removals probably is a lot higher, given the low standard of proof required to hold a child in foster care and given one fact that never changes: Judges know that they can rubber-stamp ACS hundreds of times and, though the children may suffer terribly, the judge is safe. Overrule ACS once and have something go wrong and the judge’s career can be over.)

Of course ACS Commissioner David Hansell wasn’t about to admit his agency was wrong to take away those hundreds of children.  According to a story in the Chronicle of Social Change,  Hansell said that, in most cases, at that first hearing

“ACS has consented,” to a judge’s decision to return a child home — because, for example, a supervision plan had been put in place with the parents or other family members, or an order of protection had been approved against an abuser in the household.

But we’re talking about removals that often last a few days or less – that’s long enough to traumatize a child but short enough to come up with better alternatives – if you doubt it, listen to that Latino USA story.

Even assuming the ACS caseworkers got the basic facts right – and that’s sometimes a stretch – consider the very example Hansell cites: 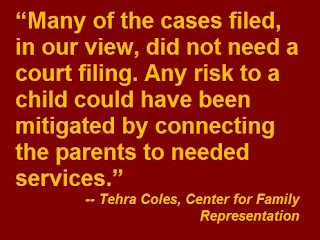 And if they really can’t do that, why not just post a guard outside the house until the order of protection is obtained?  Or move the entire family – minus the alleged abuser – to an undisclosed location for a few days? Instead, ACS chooses to punish the children with needless foster care.

As Tehra Coles, litigation supervisor for parent defense at the Center for Family Representation, said at the hearing:

Many of the cases filed, in our view, did not need a court filing. Any risk to a child could have been mitigated by connecting the parents to needed services.

Is ACS backsliding on protecting children of battered mothers?

Hansell said that one reason for a big increase in court cases filed against families from 2015 to 2017 was “a sharp increase in the number of indicated investigations with domestic violence present in the home.” 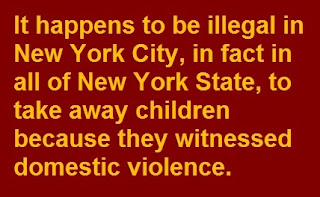 That can mean a lot of different things.  But, thanks to another lawsuit (in which, again, co-counsel for the plaintiffs was NCCPR’s Vice President) it happens to be illegal in New York City, in fact in all of New York State, to take away children because they witnessed domestic violence – typically the father or another man beating up the mother.

That’s because all the inherent trauma of removal actually is worsened for the child if that child is being removed from a mother who was, herself, a victim of domestic violence.  Indeed, during testimony in the class-action lawsuit one expert said that, for the child this is “tantamount to pouring salt into an open wound.”

Under past administrations ACS did fairly well in complying with the consent decree that emerged from this lawsuit.  Indeed, compared to much of the rest of the country, New York City was a leader.

But Hansell’s whole tenure at ACS has been marked by retreat from reform and dissembling about data.  His comment at the hearing raises questions about whether ACS is backsliding here as well.
Posted by National Coalition for Child Protection Reform at 11:00 PM