It’s the kind of rhetoric that fuels foster-care panic. Weak leadership and dissembling from the head of the child welfare agency isn’t helping.

Here’s how low politicians can sink in an effort to score points off of child abuse tragedy.  After a high-profile child abuse fatality an elected official declares: “The bureaucracy’s gonna kill us, and it’s killing kids.”

Just days later, someone running against this same elected official blames the same death on “the direct failure of a county government that rewards the [governing body of which the elected official is a part] for how many parties they go to rather than for actually doing their jobs.”

There is nothing new about politicians exploiting child abuse tragedies for political gain.  And, indeed, this exercise in crass political one-downmanship occurred in exactly the place where it was most likely to occur: Los Angeles County, California.

It’s been a decade since I first wrote that the Los Angeles County Board of Supervisors, or, as it should properly be called, “The B.S.” might well be the worst political governing body in America when it comes to child welfare.  At that time I wrote this about the m.o. of the B.S.:

In 1954, Sen. Ralph Flanders of Vermont denounced his notorious colleague Joe McCarthy in words that need be changed only slightly to explain the modus operandi of the Los Angeles County Board of Supervisors in child welfare cases. To paraphrase Flanders:

"They don their war paint; they go into their war dance; they emit their war whoops; they go forth to battle -- and proudly return with the scalp of a social worker."

The worst of the bunch was Michael Antonovich. Indeed, while he was in office, to paraphrase a line originally used for at least two U.S. Senators, the most dangerous place to stand in Los Angeles was between Michael Antonovich and a television camera.

In the years since, four out of the five Supervisors, including Antonovich, left office.  But guess what: Here come the new Supes, just like the old Supes.  A year ago I wrote:

Do we really have to go through another round of preening, posturing, finger-pointing and general sound and fury signifying nothing in the aftermath of a horrible child abuse death?  Do we really need another round of “[name of politician here] demands answers”-type press releases?  Don’t political leaders in Los Angeles finally owe the county’s most vulnerable children more?

Those are the questions we should be asking after the latest high-profile death of a child “known to the system” – the death of Anthony Avalos.  But so far, all we’ve gotten is more of the same.

The worst of the new batch? Probably Kathryn Barger, who made an inane statement in the wake of the death of Anthony Avalos that I singled out at the time.

So guess who made that inane statement about the bureaucracy killing kids in the wake of the death of another child, Noah Cuatro. Yep, Kathryn Barger.  What I did not know last year, is that Barger learned from the worst: She was the staffer in charge of child welfare issues for Antonovich.

And it’s Barger’s former and current opponent, Darrell Park, who sank to the same level in suggesting that behavior by the Supervisors is killing children.

But we learned something even worse about Barger this time.  She knows rhetoric like hers can cause a foster-care panic – a sharp, sudden spike in removals of children from their homes – but she doesn’t seem to give a damn.  Indeed, she seems to think it’s somehow inevitable.  So, she told the Chronicle of Social Change:

[Y]ou can see the rates of kids being pulled out their homes go up because social workers are petrified that they could be the next casualty of what’s going on.

Well, yes. That can happen when politicians accuse the “bureaucracy” of killing kids – and they’re the bureaucracy.

Bottom line: Barger learned well from her mentor. Crank out those press releases!  Accuse whoever’s convenient of complicity in child abuse deaths!  Grab those headlines any way you can!  And if a whole lot of children suffer the trauma of needless removal because of it, and if workers are further overwhelmed, leaving them even less time to find the next child in real danger, well, that’s just too bad.

But while, as Chronicle publisher Daniel Heimpel put it in a follow-up story, Barger seems to think a foster-care panic is “all but a fait accompli” – it doesn’t have to be.  Proof of that can be found in Connecticut.

In 2011, Gov. Dannel Malloy persuaded Joette Katz to step down from the State Supreme Court to take the hardest job in state government, running the Department of Children and Families. She stayed in that job through both of Malloy's terms in office.  The state had gone through at least three cycles of foster-care panic since 1995.  And months after Katz started on the job, it could have happened again.  But it didn’t.

This time, after a child “known to the system” died, there was no mass scapegoating of front-line workers, no hiding behind confidentiality, and no foster-care panic.

“I think in the past that’s been exactly the mistake, frankly,” Katz said at the time.

A child dies and the next thing you know, workers are getting thrown under the bus, and 500 children get removed [from their homes] the next day because it’s a reaction to a tragedy. I think that’s the exact wrong way to behave.

That’s why, at the time, I called Katz the gutsiest leader in child welfare.  But just as important, her boss backed her up. Gov. Malloy proved to be America’s gutsiest political leader on child welfare issues.  And he continued to back her up through both his terms, even as he suffered politically for it.

And the Los Angeles system is run by Bobby Cagle, who presided over one of America’s worst foster-care panics when he ran the child welfare system in Georgia.  Nothing he has done or said in Los Angeles inspires confidence.

And indeed, even as he claims not to want a foster-care panic in Los Angeles, he’s misleading the public about the fact that one already is underway – albeit not as bad an increase as one might expect.

A foster-care panic affects every decision point in child welfare.  Faced with horror story headlines and a barrage of messages to report anything and everything, people do just that – almost certainly increasing the proportion of false reports.  Caseworkers, terrified of having the next tragedy on their caseload are more prone to label a flimsy allegation “substantiated.” And even when they don’t remove the child, they are more prone to drag a family into court and force it to jump through the hoops of court supervision – adding enormous needless stress on the family, and overloading the courts.

Sure enough, those court petitions are up.  But, Cagle tells us, there is not a foster-care panic because

“Although the rate of petitions may have gone up somewhat, it did not result in more children coming out of the home proportionally” [emphasis added].

But if you are bringing more families into court needlessly and then taking the same proportion of children away, that means you are taking more children needlessly.

And, in an example of the insensitivity to the harm child welfare can do to children that characterized his tenure in Georgia and L.A., Cagle adds:

I think it’s never a bad thing to have the courts become involved, that’s a safety mechanism to have another set of eyes on it. 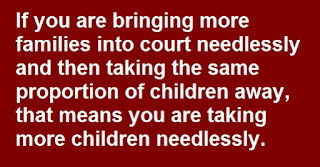 But all those additional court cases are stealing time caseworkers could spend finding the relatively few children in real danger who really do need to be taken from their homes.  All those additional court cases are slowing down the entire process, delaying provision of services to families and prolonging time spent in foster care.  And indeed, while entries actually have not gone up dramatically, there has been a disturbing increase in the number of children trapped in foster care on any given day.

Cagle’s dissembling is not unusual.  The head of New York City’s child welfare agency, David Hansell, keeps trying to pull the same sorts of stunts to hide the most recent foster-care panic there.

But at least New York City starts out with a relatively low rate-of-removal.  It’s that much worse in Los Angeles which tears apart families at more than double the rate of New York City.

Paradoxically, that may help explain why, in recent years, there have not been dramatic spikes in removals – in spite of the behavior of the Supervisors.  The baseline is simply so high it’s hard to go higher. (On the other hand, that’s never stopped Philadelphia, which is even worse.) Or it’s possible that, in the largest locally run child welfare system in America, and one that sprawls across a large urban landscape, a small countywide increase may hide a larger spike in the region where the latest high-profile tragedy took place.

The process of making Los Angeles County children safer will begin when, finally, at least one member of the B.S. has the guts to say: “We’re taking away far too many kids. Those needless removals are doing terrible harm to children, and denying caseworkers the time to find kids in real danger.”

In the meantime, the B.S. brings to mind another famous comment directed at Joe McCarthy: “At long last, have you no sense of decency?”
Posted by National Coalition for Child Protection Reform at 11:00 PM