The good news: A public radio station in Kansas City talked to the right people for a "child welfare" story. The bad news: They still missed the point

The story shows deep compassion for the trauma caused by removing children – the trauma it causes for those doing the removing, that is.

Often, when I single out for criticism particular stories about “child welfare” – or as it should be called family policing, it’s because the reporter never bothered to even speak to parents who have had their children taken, or to lawyers for such parents.

So perhaps I should just be grateful that a reporter for KCUR public radio didn’t make that mistake. She conscientiously reached out to both and included their perspectives.  Perhaps I should settle for being pleased this story is better than so many others.

But I’m not going to do that.  Because in spite of its strengths, this story still missed the point in so many ways.  It is the work of a reporter who previously did a very good story on these issues.  But this time, it seems, she found it easier to identify with the police force than with those who are policed.  Perhaps because, unlike poor people of color who understand what really happens, most journalists still have trouble thinking of child protective services caseworkers as police.

The story concerns the harm being done to children and families because of what is said to be an acute shortage of caseworkers and constant turnover as caseworkers quit due to burnout.  The premise is that because of the “shortage,” children can’t see their parents while in foster care, and families don’t get the guidance they need to jump through all the hoops they must surmount to prove themselves worthy of getting their children back.

Let’s start with the most basic failure: the false premise underlying the entire story.  Missouri does not have too few caseworkers.  Missouri has too many foster children.  Missouri tears apart families at a rate more than 50% above the national average, even when rates of family poverty are factored in.  If Missouri did no more than become no worse than average about tearing apart families, there would be enough caseworkers.  Those workers would have low enough caseloads that they would be less prone to burnout and quit.

But nowhere in the story is there any mention of Missouri’s high rate of removal.  And while there is a brief suggestion, way at the bottom, that some removals of children aren’t necessary, nowhere is a connection made between this and the so-called shortage of caseworkers.

Getting down to cases

The story begins this way:

Shayla Curts, 22, had been living at Newhouse KC, a domestic violence shelter in Kansas City, Missouri, for several months after the birth of her second child. She said it gave her a safe place to breast feed her infant and care for her 4-year-old while trying to get back on her feet.

But she was asked to leave Newhouse after what she claims were false allegations of misconduct. Because Curts didn't have a stable housing alternative, on June 15, 2022, investigators from the Jackson County Children’s Division of the Missouri Department of Social Services and two policemen came to take her children into protective custody.

Anybody see the problem here yet?  If not, consider how the reporter circles back to Ms. Curts at the end:

She has a new caseworker who has been responding and appears committed to helping Curts get her kids back as soon as possible. And she’s started a job at McDonald's.

“It should be 60 days, four checks or so and I’ll have at least enough to get accepted into an apartment,’" she said. “I need housing before I can get my kids back. My plan is to have a place, and move in, within 60 days.” 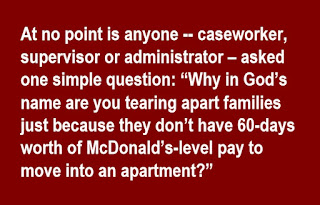 OK, now do we see the problem?  At no point is anyone -- caseworker, supervisor or administrator – asked one simple question: “Why in God’s name are you tearing apart families just because they don’t have 60-days worth of McDonald’s-level pay to move into an apartment?”

It’s not like the state can’t afford to step in and provide this money.  Even with the federal government  picking up a large share of the tab for foster care, Missouri still will pay more for foster care than it would cost to help Ms. Curts get an apartment.  There is at least one Kansas City Missouri police officer KCUR could have spoken to who understands this perfectly.

Using visits as a “reward”

In another case, KCUR tells us, a father

continues to adhere to the requirements of his court order: going to therapy, getting psychological evaluations, taking anger management and parenting classes. He has been rewarded by progressively more time with his four-year-old son and three-year-old daughter.

But the court’s not holding up its end of the deal, he said. There have been three-month periods when he's gone without seeing his children.

By focusing on the caseworker “shortage” impeding visits, the story misses the larger point: It is an act of state-sanctioned child abuse to use visits with children as a reward or punishment for parents – if for no other reason than the fact that the victims of that punishment are the children.  Visits are the most important way, sometimes the only way, to ease the enormous emotional trauma that removal inflicts on children.  Depriving children of visits in order to use visits as carrots or sticks against parents is barbaric.  But this barbarity goes unremarked upon.

The story shows far more concern about the emotional toll on – yes, the caseworkers. It cites a regional director for the state family policing agency, known in Missouri as the Children’s Division, who says caseworkers

often suffer what’s known as secondary trauma, the experience of absorbing the grief, anxiety and anger that comes with routinely seeing the impact on families when parents and children are separated.

Hmmm. How might we fix this? The story suggests counseling and pay raises for the workers.  I don’t object to either.  But there might just be a better way: How about sparing caseworkers the secondary trauma they experience when they remove kids by having them not inflict the primary trauma of separation on all those kids in the first place? 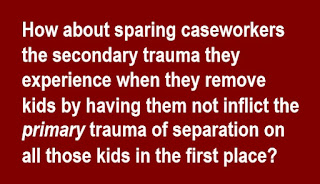 I would ask readers to stop and consider for a moment how they might react to a story about law enforcement that suggested the biggest problem with stop-and-frisk policing is the secondary trauma inflicted on the cops who do the stopping and the frisking – and that the solution to the failings of law enforcement is to pay the police more and give them counseling.

the hardest part of her job were the bureaucratic obstacles she faced in trying to reunite families after relatively minor infractions.  "There was often nothing there, no reason for a kid to be in foster care," she said. “I remember one of the these cases took an entire year. It was like the court pushed for them to remain separated."

Courts have exceptional power to do that in Missouri, since they actually run what amounts to a second, parallel (and probably unconstitutional) family policing agency known as the “juvenile office” – which often can be even worse than the Children’s Division.

This was certainly a better story than many, perhaps most day-to-day reporting on “child welfare.”

But the fact that even an excellent reporter producing an in-depth public radio story can use a case in which the only thing separating a family is housing, another case in which visits with children are being used as a “reward” for a parent, have a caseworker admit that children are in foster care needlessly, all in a state that tears apart families at a rate 50% above the national average – and still think the primary problem is a “shortage” of caseworkers, suggests that the journalism of child welfare has a long way to go.

Posted by National Coalition for Child Protection Reform at 3:52 AM