Earlier this year, I did a series of posts about reputation laundering in family policing – the process by which mainstream “child welfare” organizations seek to co-opt the rhetoric of change while refusing to support any measures that would actually change anything.  (And see also this excellent analysis from Lexie Gruber-Perez in Family Integrity and Justice Quarterly.) The reputation laundering also is an effort to try to make us forget these organizations’ past behavior.

Wait, did I say past?

Actually, for the group that calls itself Prevent Child Abuse America (PCAA), the behavior has never stopped.

I discussed their ugly history in a presentation at the Kempe Center international conference last year.  I noted how PCAA itself described its past behavior as “health terrorism.” And in a post about their reputation laundering, I noted examples of how the health terrorism continues.  But it turns out I missed one of the most flagrant examples.

PCAA was among the sponsors of a video, complete with lurid horror stories and a celebrity narrator, promoting the whole discredited myth about child abuse and COVID-19.  You know the one:  The myth suggesting that as soon as overwhelmingly middle-class disproportionately white “mandated reporters” didn’t have their “eyes” constantly on children who are neither, their parents would unleash upon them horrific child abuse on a massive scale. 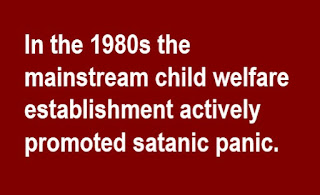 The video would have been bad enough at the start of the pandemic.  But it was released in March, 2022, long after what’s been called the “pandemic of child abuse” myth was discredited.  Nevertheless, the video predicted that as COVID restrictions ended and children returned to school, there would be “a surge in the number of abused children reaching out for help.”

It didn’t happen – because there was no pandemic of child abuse.

The people behind the video, including PCAA, undoubtedly meant well.  There really are cases of horrific child abuse.  But they also are extremely rare. That makes them no less important to address – but it requires a change in how we address them.

The horror story cases are needles in a haystack.  Health terrorism makes the haystack bigger, so it’s even harder to find the needles.  So in addition to all the other harm done by messaging like that in the video, it also is likely to backfire.

NBC News took an in-depth look at the recent rise in conspiracy theories about satanic ritual child abuse. The story cites a survey that found that

One-third of respondents agreed with the statement, “members of Satanic cults secretly abuse thousands of children every year.” One quarter agreed that “Satanic ritual sex abuse is widespread in this country,” and 21% agreed that “numerous preschools and public schools secretly engage in Satanic practices.”

But what sets this story apart is this: It draws a direct line from Q-Anon and Pizzagate back to the
“satanic panic” of the 1980s.  And in the 1980s the mainstream child welfare establishment actively promoted satanic panic.  If you’re not familiar with what happened then, just Google “McMartin Preschool” – or read this summary.  One group, the American Professional Society on the Abuse of Children (APSAC) was formed by some of those promoting the McMartin myths. But they didn’t think they were myths, they really believed it, and they really thought they were helping children.  (APSAC was another sponsor, indeed it appears to be one of the driving forces, behind the video.)

Prevent Child Abuse America also stoked the fear.  As I noted in the Kempe Conference presentation:

In a 1986 “fact sheet” PCAA wrote about the McMartin defendants as if they’d been convicted.  The fact sheet went on to say that “one ongoing federally-funded study is investigating over 30 cases of sexual abuse with multiple perpetrators and multiple victims in daycare settings.”

The fact sheet goes on to cite an authority who had dealt with over 200 cases of adults allegedly abused as children.  “Their descriptions of abuse run from fondling to extreme sexual abuse which included ritualistic murder.”  The authority cited is Dr. Bennett Braun.  I have only two words to say about Dr. Braun: Google him.

Among the allegations made by young children in these cases, after repeated interrogations: Cannibalism, being flown all over the country to be abused but returned in time to be picked up by their parents, having their eyes removed – and put back.

But at the time PCAA’s New York affiliate said that should not encourage skepticism. They quoted an expert who explained that: “the more bizarre the story, the more reality there may be to it.”

Imagine what Q-Anon would make of a statement like that today.

Yes, they meant well.  But that’s not enough.  Somehow APSAC, PCAA and others never have been held accountable for the harm health terrorism did at the time – and the harm it still does today. Quoting  Prof. Joseph Uscinski, the expert who conducted the survey, the NBC story explains that satanic panic

“… was a widespread belief back in the ʼ80s. And when the satanic panic disappeared, it just disappeared. It wasn’t like there was a reckoning.”

The seeds of Q-Anon and Pizzagate were planted at the McMartin preschool, then unintentionally grown and nurtured by a lot of “professionals” who should have known better.  If they refuse to apologize and refuse to stop engaging in health terrorism, then, at a minimum, the rest of us should consign these professionals and their organizations to well-deserved obscurity, instead of continuing to take their pronouncements about “child welfare” seriously.

Posted by National Coalition for Child Protection Reform at 3:14 AM