Why is foster care so easy and everything else so hard?


A Kansas City police officer, with a lot of backup, saves three children from needless foster care. But look what it took to achieve that result.

On one level this very good story, written by Cortlynn Stark, an intern for the Kansas City Star, is inspiring. On another level it’s frustrating. And and on still another it’s outrageous.

On June 28, at about 2:00 a.m. Kansas City police Sgt. A.J. Henry found a Chantre Russ and her three children, ages 4, 2 and 7 months, sleeping in a parking lot stairway.  They had arrived on a bus from California. The family had to leave that state after the father of the oldest child was murdered.

Sgt. Henry took out his phone and made a call – but not the one you might expect.

He did not call Missouri’s child abuse “hotline” to have child protective services rush out and throw the children into foster care.  Instead, even though it was 2:00 a.m., he called Gina English. She’s the Kansas City Police Department’s Social Services Coordinator – a job that exists only because of grants from a private foundation.

And it wasn’t. But oh, what it took to achieve that result.

The story goes into great detail about all the different people who had to be contacted and mobilized just to keep the children in this one family out of foster care: The people who came up with car seats for the children, the officers who pooled their own money to get the family a hotel room, the groups that supplied diapers and baby wipes. As the story said:  “Support from across Kanass City poured in…”

It all happened just in time. Ms. Russ was on the verge of calling child protective services on herself.

This amazing collective effort is the part of the story that’s inspiring. Here’s the part that’s frustrating:

I’m sure this isn’t the first time Sgt. Henry, Ms. English and others have extended themselves for families this way.  But no one can sustain this kind of collective ad hoc volunteer effort for every family who needs it.  So it’s frustrating that this risks becoming one of those feel-good stories that warms our hearts about the family that was helped, as we forget all the others who are not.

Nationwide, multiple studies have found that 30 percent America’s foster children could be home right now if their parents had decent housing.  So I hope readers, and other journalists, who see this story will remember the thousands of other families, just like this one, whose children are in fact torn from their parents every year because their parents lack housing.  And I hope they will realize that those children suffer the same sorts of trauma as that endured by children taken at the Mexican border.

The part of the story that’s outrageous can be boiled down to a single question:

WHY IS IT SO DAMN HARD? 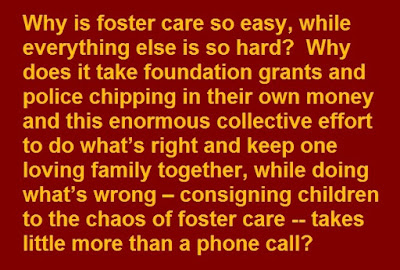 Why is foster care so easy, while everything else is so hard?  Why does it take foundation grants and police chipping in their own money and this enormous collective effort to do what’s right and keep one loving family together, while doing what’s wrong – consigning children to the chaos of foster care -- takes little more than a phone call?

The technical answer has to do with arcane child welfare funding formulas that reimburse states for a significant share of the costs of foster care in many cases, while providing far less to keep families together. (And by the way, the grossly overhyped Family First Act would do nothing for the family in this case – the kind of concrete help they need isn’t covered.)

That leaves good people like Sgt. Henry, Ms. English and the others who banded together in this case to do the best they can, largely on their own.
Posted by National Coalition for Child Protection Reform at 8:00 AM