As usual, Oregon’s Senator Soundbite has a plan that would make everything worse.

I have a hypothetical question for some folks in Oregon:

Suppose a couple of strangers kidnapped your child at birth and fled to Mexico.  Suppose they took really good care of your child.  Suppose a year, or two years, or three years later they came back.  Should they be allowed to keep your child?

Of course not, you say?

But wait.  The kidnappers took great care of your child.  They just figured they’d do a better job than you.  And now the child has bonded with them.  After all, the kidnappers are the only family your child has ever known!

Still no?  Are you sure?

Then why are you – three state legislators, among others -- demanding that white foster parents be allowed to keep a three-year-old Asian-American child for precisely the same reason? (And in this case, the “only family she’s ever known” claim isn’t even true, something I’ll get to below.)

And why is another legislator, Oregon’s notorious Senator Soundbite, Sara Gelser Blouin, planning to introduce legislation that would tilt the scales of justice even further in favor of what should be called stranger-care parents over relatives – while disingenuously claiming her bill supports kinship placements?

If alleged bonding is superior to every other consideration and this child supposedly would be terribly harmed if moved from “the only family she’s ever known,” (and, again, that isn’t even true in this case) why should that alleged harm be inflicted on a child just because the initial removal was clearly illegal?

Unfortunately, there is nothing new about white, middle-class people playing the bonding card in order to justify keeping in their possession children who often are neither.  Among the many who done it: Donald Trump.  His administration used it as a justification for not returning children his administration took at the Mexican border.

A Trump Administration official explained that  even if they were wrong to take them from their parents in the first place, if they tried to find them and return them now it would “present grave child welfare concerns. … It would destabilize the permanency of their existing home environment, and could be traumatic to the children.”

The case in Oregon

We know from decades of research that kinship care placements reduce the trauma of removal from home, are better for children’s mental health, behavioral health and overall well-being, are more likely to keep siblings together, are more likely to preserve children’s cultural identity – and are safer -- than stranger care.  One other thing: notwithstanding all the claims about stability by supporters of the foster parents, research shows kinship placements are more stable than placements with strangers.  That may be because relatives are less likely to give up on a child when that cute toddler becomes a rebellious teen.

Yet somehow, A.N. wound up with the foster parents long enough for their supporters to claim those foster parents are “the only family she’s ever known.”  We don’t know why, but we do know this: An evaluation from the Oregon Department of Human Services, described the child as “white – no cultural issues.”

In fact, as her uncle points out: “Our niece is Asian-American, and she deserves to be raised by her Asian-American family.” (You’d think the fact that the relatives’ surname is Nishimoto would have been a clue.)

We also know this: the white foster parents are not the only family this child has ever known.  On the contrary, as Central Oregon Daily News reports:

A video provided to Central Oregon Daily News shows the girl as an infant to a two year old, to a three year old, laughing and hugging the Nishimotos, and playing with their sons.

But none of that has stopped three Republican state legislators from taking what amounts to the Trump Administration position and supporting the white foster parents.  Still, at least there’s no hypocrisy there.  They’re supporting the foster parents as they play the bonding  card, pure and simple.

The same cannot be said for Oregon’s Senator Soundbite – Democrat Sara Gelser Blouin, who once again is disguising a take-the-child-and-run agenda while claiming to sympathize with the Nishimotos.

For those unfamiliar with Blouin’s track record: She first came to prominence taking data out of context to claim – wrongly -- that Oregon wasn’t subjecting enough children to traumatic child abuse investigations; this in a state that long as torn apart families at a rate well above the national average.  Then she got the Legislature to kill a “differential response” initiative one month after  a comprehensive independent evaluation found that, contrary to Blouin’s claims, the initiative was safe.

Now Blouin has issued a statement that is a masterpiece of sleight-of-hand.  It sounds like a “fair and balanced” approach.  In fact it’s as fair and balanced as Fox News.  The good stuff is already law, only the bad stuff is new.

The statement starts out well enough:

All of the heartache in this case related to the adoption and placement decision for all involved mostly [sic] likely could have been avoided if the agency had placed AN with relatives when they first stepped forward.

Wow; does Sara Gelser Blouin finally get it?  Nope.  For starters, notice how she never actually says what should happen now.  And it’s all downhill from there.  Here’s how the sleight-of-hand begins:

Sounds great right?  Except this is already required under federal law.  Notice how she says her bill would merely “clarify” things.  Then comes the hammer:

…and to prioritize placement with long term foster parents if a child has been in the continuous care of the foster parents for more than 12 consecutive months prior to the child becoming free for adoption. This is consistent with the law in other states.

Well – two other states anyway.  Those laws are the brainchild of a foster and adoptive parent who used to run the far-right Goldwater Institute (until she was reportedly ousted by the Institute’s board).  At Goldwater, she spearheaded their ongoing efforts to get the Supreme Court to overturn the most progressive, anti-racist child welfare law in America, the Indian Child Welfare Act. 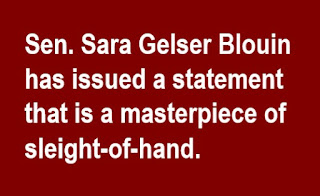 She’s been promoting bills like the one Gelser plans to introduce.  Those laws make it harder for relatives to gain custody.

Consider the law in Georgia: Under that law, courts need merely “consider” whether the state’s family policing agency – a more accurate term than “child welfare agency” - did enough to find relatives.  But whether they did or not, the court still is freed, indeed encouraged to give preference to stranger-care parents if the child has been living with them for 12 months.  And a specific preference for relatives in prior law was repealed.

That’s only the beginning.  The Georgia law merely requires the state family policing agency to search for relatives – again, as federal law also already requires.  It doesn’t stop the state from imposing all sorts of requirements on the relatives involving middle-class creature comforts that poor people often find it impossible to complete.  Or the agency can simply stall and stall and stall for 12 months.

The Nishimotos say they came forward immediately.  There’s nothing in Gelser’s statement to indicate her bill will require Oregon DHS to do anything differently in such cases in the future, whereas after the 12 months pass, no matter why those 12 months passed, the agency and the courts will be instructed to prioritize placement with the stranger-care parents.  Thus, were Gelser’s proposed law in effect now, it would be even harder for the Nishimotos to gain custody of their niece.

The 12-month time limit is arbitrary, capricious and cruel for other reasons.  What if relatives are simply too hard to locate right away?  What if, despite agency efforts relatives don’t find out about a child until after 12 months?

At long last, child welfare is waking up to the enormous harm of arbitrary timelines - how they needlessly tear apart thousands of overwhelmingly poor, disproportionately nonwhite families and put paper "permanence" over relational  permanence. Even the American Bar Association says so. But leave it to Sara Gelser Blouin to want to impose additional timelines on those same families.

The real reason for laws like the one Blouin wants, and the real reason stranger-care parents playing the bonding card is so appealing to so many is the reason behind every injustice in family policing: Stranger-care parents typically are white and middle-class. The families from whom children are taken and their relatives are more likely to be neither – so they are viewed as expendable.

This week, Sixto Cancel, who grew up in foster care and founded Think of Us gave an interview to Youth Today.  He talked about the urgent need to make it easier, not harder, for extended family members to take in children.  At the end of the interview he was asked: “If you had a magic wand, and you could do one fix on the child welfare system right now, what would it be?”

I would go ahead and ensure that kin were able to take in their relatives without going through an exhaustive and intrusive process of getting licensed.

Oregon’s foster children would be far better off if Senator Soundbite stopped taking her cues from people with ties to the Trump Administration and the Goldwater Institute and started listening to young people with lived experience such as Sixto Cancel.

Posted by National Coalition for Child Protection Reform at 4:31 AM