(And why are members of the Left-leaning City Council buying into a right-wing narrative about homelessness?)

UPDATE: Check out the detailed testimony from several family defense and family advocacy organizations opposing the legislation discussed in this post.

I have written before about how mandatory child abuse reporting laws backfire.  They overload child welfare systems – or as they should be called, “family policing systems” -- with false reports and cases in which poverty is confused with neglect, stealing time from finding the few children in real danger.  And they drive people away from seeking help – because almost all helpers are mandatory reporters.

There is abundant research confirming the harm.  And now there has emerged a sadly perfect real-world example.

City Limits reports that the New York City Council is considering legislation that would require the city to provide “on-site mental health services” at all homeless shelters that serve families.

What could possibly be wrong with that?  In a sane, logical world, nothing.  For reasons discussed below, the providers of these “on-site mental health services” probably wouldn’t do a lot of good, but at least they wouldn’t make things worse.

But when it comes to how we treat impoverished families, especially impoverished families of color, that’s not the world we live in.  We live in a world in which every one of those providing the “on-site mental health services” is a mandated reporter of “child abuse” and “child neglect” – which, again, is often confused with poverty.  Very few rich people live in homeless shelters. 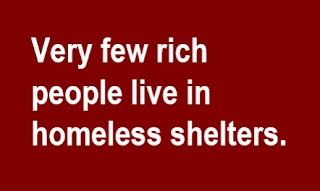 If a homeless mother confides to one of these providers that she sometimes feels, say, deeply depressed or worse, once lashed out and slapped her teenage son, the provider might help her find ways to cope with the stress.  Then again, s/he might well call a child abuse hotline, turn the mother in to the family police. That would make everything ten times worse for the children by subjecting them to traumatic investigations and stripsearches and possibly consigning them to the chaos of foster care.  Even if the provider doesn’t really think setting all this in motion is a good idea – s/he’s a mandated reporter who could get in big trouble for not making the call.

So this is how mandated reporting makes everything worse:  Advocates had to come to a City Council hearing to explain how mandatory reporting has turned adding a little extra “help” for homeless families into a really a bad idea.  As City Limits reported:

Life in shelter already subjects families to an extra level of behavioral rules and scrutiny, putting them at additional risk of involvement with a child protective services system critics say is often biased against low-income families. That system “conflates poverty with neglect,” Alexandra Dougherty, a senior staff Attorney at Brooklyn Defender Services, testified to councilmembers Tuesday.

“This raises real privacy concerns and is likely to increase the shelter-to-ACS pipeline that harms families,” Nora McCarthy, director and co-founder of the New York City Family Policy Project, testified to councilmembers of the “unintended effects” the legislation could bring.

In response, supporters spoke of adding language to make clear services would be voluntary and would include “strict privacy perimeters.”  But that’s irrelevant.  Mandatory reporting laws supersede all other rules about privacy.  Whatever the “privacy perimeters” may be, mandatory reporters are required to breach them – and call the family police.

Buying in to a right-wing narrative

There is a second problem with the proposal.  As McCarthy put it:

“It also conflates involvement in shelter with mental health issues in a way that’s troubling.” 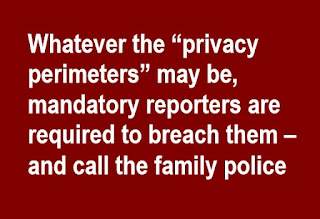 In fact, backers of this measure on the left-leading New York City Council are embracing a right-wing
narrative: that homelessness supposedly is the fault of the homeless – they’re all mentally ill, you know!  It was how the Reagan Administration explained away the explosion in homelessness that followed draconian cuts to social programs.

In fact, a comprehensive study at the time showed only 15% of homeless people had any sign of mental illness. And that’s pretty remarkable since, as Ann Braden Johnson wrote at the time in her book Out of Bedlam, being homeless can cause mental illness.

“We’ve seen with many providers a tendency to pathologize and say that the cause of families’ issues is mental illness, when we know that the primary drivers of family homelessness are eviction, unsafe housing conditions, overcrowding, domestic violence—not mental health.”

This too is backed up by research.  A major study found that one can reduce the number of children taken from homeless families by half just by providing housing vouchers.  But if you combine the vouchers with social work, the success rate actually is lower.

Still, if the members of the New York City Council really have their hearts set on this, there is one thing they could do: Ask the New York State Legislature to amend state law to exempt any mental health providers in homeless shelters from mandatory reporting requirements.  This could turn something that would have done harm into an opportunity to demonstrate how much better helping works when the helpers are not forced to turn anyone in to the family police.

Posted by National Coalition for Child Protection Reform at 2:42 AM