"Child welfare" in Missouri has a dubious distinction

In Missouri, everyone caught up in the child welfare system gets to be harassed by two agencies.  Here’s how that helped tear apart a Black family.

Samantha Mungai, an immigrant from Kenya – a dreamer, brought here as a child herself - was terrified of losing her job and winding up homeless.  So one night, while she worked, she left her four-year-old home alone in her Kansas City, Missouri apartment.  As a result, the child has lost the right ever to see her mother again during her childhood.  Her rights to her mother were terminated – a more accurate term than termination of parental rights.

The state child welfare agency, known as the Children’s Division, and the courts not only took the child needlessly and then refused to give her back, they refused even to allow extended family to adopt the child.  Now the child lives with the white foster parents who adopted her.  All of which prompted first Kansas City Star Editorial Writer Toriano Porter and then Laura Ziegler of KCUR public radio to take an in-depth look at, as KCUR’s headline puts it, “What The Adoption of One Kansas City Mother’s Child Says About Race in the Child Welfare System.”

It says exactly what you think it says.

Were Ms. Mungai white and middle class, the issue wouldn’t have arisen.  She wouldn’t have had to work at night as a dancer (and you can bet that the job, in itself, counted against her).  Whenever and wherever she worked, were she middle class, she could have afforded childcare.  And if you have any doubt about how much more leeway middle-class white families get in situations like this, check out this outstanding 2003 New York Times story that examined exactly that.

This is a classic example of confusing poverty with neglect.  The problem that started all this could have been solved with basic concrete help.  Indeed, in the same city a police officer, A.J. Henry showed exactly that kind of common decency in what is, in some ways, a strikingly similar case. 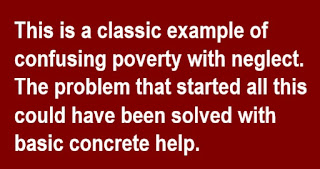 Instead, the Missouri Children’s Division took the child and ran – something they do at a rate 50% above the national average.  Then they poked through Ms. Mungai’s life looking for issues they could raise to hang onto the child and make her jump through ever more hopes.  At one point, a traffic violation was held against her.  At another point, the Star reports, she even was dinged for not being able to pay the cost of the hoops through which she was required to jump.  Even her first caseworker is, as the KCUR story puts it …

…still haunted by the many obstacles she feels made it almost impossible for Mungai to be reunited with her daughter.

"She jumped through so many hoops," the caseworker said. "She had a red flag because she was Black, she was lower income, an immigrant, and a stripper, a line of work people judge. We failed her, the system failed her."

Worse, they failed her child, who, both stories indicate, has suffered emotionally from her removal from her mother and placement with white strangers.  Even before adopting the child, the foster parents cut her off from visits with extended family after the Star published its story.

One of the issues the Children’s Division found illustrates another common nationwide problem: Needlessly taking children from victims of domestic violence, the same issue exposed so well last year by USA Today Network reporters in Florida.  As this Blog has noted often, taking children from domestic violence victims does the children so much harm that in one state, New York, it’s actually illegal.

But there also was a third factor in this case that is unique to Missouri.  As the public radio story explains:

Documents obtained by KCUR indicate that Mungai was making progress toward meeting the requirements to achieve the goal all had agreed on: reunification. A handwritten case report dated July 11, 2018 — a year after the child was removed from the home — noted, “(Mom) moved into apartment… (is) adjusting well…(she is) working…visits (with her daughter) goes well….approved for Food Stamps.”

Four months later, Mungai called in from work for her regular team meeting and was shocked to hear Juvenile Officer Heather Kindle announce she was changing the goal from reunification to TPR — Termination of Parental Rights.

That might reasonably prompt people in 49 states to ask: What in the world is a “juvenile officer” and why does she have so much power?

The Juvenile Office is a bizarre “fifth wheel” in the Missouri child welfare system.  It is, in effect, a second, parallel child protective services agency run directly by the courts, that is even more powerful than the one run by the executive branch.  I’ll describe how it works in detail below, but first, consider the arrogance – and possible disregard for law – displayed by the office not only in this case but in others, as seen in these comments to KCUR from Clay County supervising juvenile officer Janet Rogers:

“The law, as far as juvenile cases, is not clear cut.  They’re not like criminal cases where you can say, 'Well, you’ve proved it, here’s the sentence, off to the department of corrections.' (These cases ) are very subjective, we put recommendations in front of the judge, sometimes she takes them, sometimes she doesn’t." 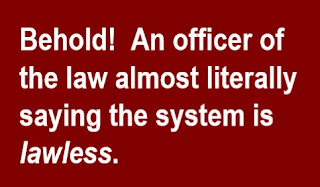 Behold!  An officer of the law almost literally saying the system is lawless.  In fact, the
system is supposed to be like the criminal system, particularly when it comes to permanently severing a child’s right to her or his parents.  You are supposed to prove a parent is unfit before even reaching the issue of “best interests.”  And you’re supposed to do it with clear and convincing evidence.  Says who?  Says the United States Supreme Court.

So what are they doing at the Juvenile Office?  Do they just make it up as they go along? Do they recommend destroying a family forever whenever they feel like it for whatever “very subjective” reason suits them?  Surely by now we’ve figured out that subjectivity is just another word for bias.

For more on how this bizarre fifth wheel drives the entire vehicle of child welfare in Missouri, and why that’s so harmful for children, here’s an excerpt from NCCPR’s 2003 report on Missouri child welfare.  Some of what you’ll read presaged what happened in this case:

Missouri may be the only child protection system in America with two front doors.

As in all states, citizens are encouraged to call the child welfare agency if they have “reasonable cause to suspect” maltreatment, and some professionals are required to report.

But in Missouri, citizens can simply call their county juvenile office instead – or as well.  (Mandated reporters must call DFS [The Department of Family Services; this report predates creation of the Children’s Division], but they also can call the juvenile office).

Even when both organizations agree on removal, parents may wind up whipsawed between conflicting requirements.  They may do everything DFS asks, only to go to court and find that the juvenile office isn’t satisfied – or vice versa.

And it is the juvenile office, not DFS, that actually performs the role equivalent to a prosecutor in a criminal trial.  Thus, if DFS thinks a child should return home and the juvenile office doesn’t, (or vice versa) DFS sometimes may finally have something in common with the parents: The agency may not be adequately represented in court.  DFS does have its own lawyers and they do appear in some, but reportedly not all, cases.

The fact that no other state has a “Juvenile Office” does not, in itself, make Missouri wrong.  If Missouri had the best child welfare system in America, then there might be reason for other states to follow its lead.  But, of course, it doesn’t.  Missouri has a typically wretched “child welfare” system that, as noted above, tears apart families at a rate 50% above the national average.  Clearly the juvenile office isn’t the only reason for this – other states are even worse – but it sure isn’t helping.

Missouri could help children in impoverished families by abolishing the juvenile office – and plowing the savings into things like, say, childcare for those families.

And the next time a neighbor in Kansas City feels they must call someone because a young child is home alone, I hope they’ll try calling Sgt. Henry first.