In the end, it was the “Seinfeld” of Commissions: The Massachusetts Mandated Reporter Commission recommends -- NOTHING! (And that is a big step forward.)

● At its final meeting Monday, the Commission refused to endorse recommendations to vastly widen the child welfare surveillance state – in a state that already tears apart families at a rate 60% above the national average.

rather than focusing on expanding mandated reporting, the commission should be looking at how to address racial bias in the system; how to avoid undermining families’ trust in child welfare agencies and service providers; and how to get [the state Department of Children and Families] to provide more family stabilization services in the community.

“In terms of keeping kids safe, this assumption that the one way to keep kids safe is to expand the mandated reporting is not playing out in reality,” Elsen said.

● The report remains secret until June 30 (this post is based on what commissioners said at their final public meeting and what could be seen when the report was screenshared). Now we have to start all over again with the Massachusetts Legislature.  But this just might be a turning point in how we protect children – not just in Massachusetts but nationwide.

It wasn’t supposed to happen this way.  It was supposed to be easy: High-profile child abuse cases in another state lead some Massachusetts legislators to spot (or have pointed out to them) a “loophole” in the state’s law that already requires huge numbers of people who work with children to report any suspicion of child abuse to the state Department of Children and Families.  They name a commission to study mandatory reporting with an eye toward closing the “loophole.”

But they put in charge the state’s “Child Advocate” – Maria Mossaides, among the Massachusetts officials most fanatical about creating an ever-larger child welfare surveillance state.

Unlike commissions directed by leaders with open minds, the process does not begin with public hearings.  Instead, Mossaides chooses what the commissioners will hear – and most of them were sympathetic state officials anyway, including two from DCF.

Mossaides and her staff decide what the Commission will learn about and how they will learn it, with carefully staged presentations that leave no clue about the fact that mandatory reporting is, in fact, controversial and many one-time proponents have had second thoughts.

By the time Mossaides is done, the Commission has produced draft recommendations that would have entrenched an extremist agenda. They would have vastly expanded who had to report, increased penalties for not reporting up to ten-fold, and made it even easier to confuse poverty with neglect. (Details are in a series of previous posts about the Commission.)

But between the time the Commission started work and the time it issued the draft recommendations, the world changed.  Although the racial justice reckoning has been slow to reach child welfare, in Massachusetts it prompted opposition the Commission never expected.  It began with a letter from six lawyers pointing out case after case of false reports harming children.

By the time Mossaides finally allowed public hearings, that opposition was fierce.  During a total of four hours of testimony, almost every witness excoriated the draft recommendations.

It had an impact.  Here’s what one commissioner, Middlesex County District Attorney Marian Ryan said before the hearings:

“This statute hasn’t had a comprehensive look in a very long time.  It’s been amended a few times, adding things like clergy and certain other groups, but no one stepped back, put it all together and looked at all of it. That’s really where our focus has been. How do you make this work best to protect kids and at the same time be culturally competent?”

Here's what she said at the first meeting after the hearings:

I spent a lot of years thinking that [mandated reporting] gets us to a better place; I’m disheartened to hear maybe it really doesn’t - and even if it does, perception is reality.  A lot of well-credentialed, well-meaning experts think this doesn’t work. I don’t know how we’re going to get any legitimacy about finetuning the process if a significant number think the process doesn’t work anyway. … I was taken aback to hear so much of that conversation.

Why didn’t they know?

The obvious question: How could you have met for more than a year and still been shocked to hear these points of view?  The answer: Mossaides had an iron grip on the process, making sure the commission heard only what she wanted it to hear.

Once that grip was broken, Mossaides and her allies on the Commission tried desperately to salvage the recommendations, including outvoting (in a sort of informal show of hands) dissenters who didn’t want the recommendations included in the report at all – because they had not been voted on and were not, in fact, Commission recommendations.  They compromised; agreeing to stronger language to make this clear.

But Mossaides kept spinning right up to the very end, promoting the big lie of American child welfare – that curbing needless intrusion into families is at odds with child safety.  She even tried to suggest that racial justice was at odds with child safety, claiming that the new language in the report should talk about “balancing child protection and disproportionate impact on children of color.”

But dissenting members of the Commission found that unacceptable.  One of them, Angela Brooks, director of the Children's Justice Unit in the Massachusetts Attorney General’s office, called Mossaides out on it.

It appears that, in the end, a much more nuanced preamble to the report was adopted – though there was still some effort to sneak in the idea that mandatory reporting enhances child safety, which it does not.

I say “it appears” because, though the meeting where the final report was discussed was public, the report itself was not.   The public had to read whatever it could as it scrolled by when the meeting was in screen share mode.  I managed to get these screenshots which include much, but not all, of the preamble: 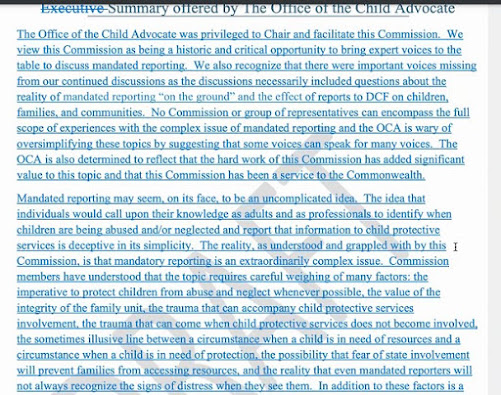 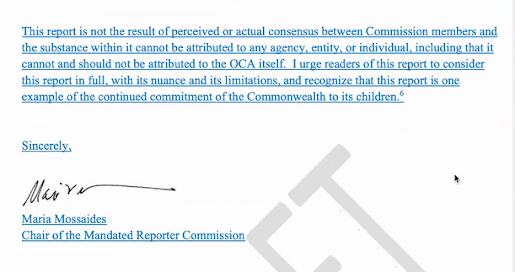 But what’s in the other 98 pages?  We should find out tomorrow (June 30).  I think I saw at least one blatant attempt at deck stacking scroll by during the screen sharing; my guess is Mossaides and her staff did as much of that as they could get away with.

Now it gets even harder

It’s one thing to move members of a commission singularly focused on this issue.  But now the report goes to the Massachusetts Legislature. Like everyone else, the lawmakers have been exposed to decades of “health terrorism” – the deliberate misrepresentation of the scope of a problem to “raise awareness.”  (The phrase comes not from critics, but from people who admit to having engaged in the practice.)

That’s why so many people who have good intentions, such as Kate Ginnis of DCF’s parent agency, a commissioner even more extreme than Mossaides, recoil in horror at the very thought of, say, abolishing mandated reporting – even though it almost certainly would make children safer.

And even as tried to spin the report publicly, Mossaides also has a backchannel to key lawmakers.  We know this because – she said so; repeatedly referring to her conversations with those lawmakers.

But the fact that there were people of goodwill on the Massachusetts Mandated Reporter Commission who listened to the public, took to heart what they heard and, yes, changed their minds is enormously encouraging.  It suggests the possibility that the health terrorists won’t win in the end, and that this might be the moment child welfare starts to change in Massachusetts and beyond.

The Legislature today is where the Commission was two years ago.  One key legislator has made clear his views are perfectly aligned with Mossaides and Ginnis; another has shown more skepticism.  So now we have to start all over again and see if we can move them, too.

As for the idea that this was a “Seinfeld Commission,” that’s meant as a compliment.  Sometimes recommending nothing is really something.

Posted by National Coalition for Child Protection Reform at 5:50 PM