The report of the Massachusetts Mandated Reporter Commission needs an appendectomy

So, you chair a commission that spent nearly two years drafting recommendations that would vastly expand “mandatory reporting” of suspected child abuse and neglect – in a state that already tears apart families at a rate 60% above the national average when rates of child poverty are factored in.

If you’re Massachusetts “Child Advocate” Maria Mossaides, who chairs the Massachusetts Mandated Reporter Commission, you’ll try to sneak all those bad ideas into an “appendix” to your report and use ambiguous language to allow legislators to infer that the commission really does support those bad ideas.  And when it looks like that won’t work, you’ll propose language that suggests racial justice is at odds with child safety.

That’s what happened at what was supposed to be the Commission’s final meeting Thursday.  Because Mossaides and her allies didn’t quite manage to pull this off, there will be another virtual meeting starting at 10:00 a.m. on Monday.

Most of the discussion Thursday revolved around a part of a draft final report known as Appendix A.  It’s not entirely clear what’s in Appendix A, or the rest of the report. That’s because though the virtual meeting was public, the document was not.  Except when portions were screenshared, we could only infer what was in the report and the appendix.

Commission member Lisa Hewitt of the Committee for Public Counsel Services, which represents parents in child welfare cases, suggested dropping Appendix A. Why include an appendix filled with recommendations that predated the public hearings, recommendations for which there often was strong dissent among the commissioners and on which there was no vote?

And why, she asked, was there so little discussion of the public hearing testimony, most of which trashed many of those recommendations – testimony “which was fantastic and truly impacted a lot of individuals on the [commission]?” She said including the appendix was “misleading.”  If the Commission didn’t get rid of the Appendix completely then “there should be much more explicit language [stating] that this has not been voted on and many of us don’t join in many of the suggestions.”

One might expect that suggestion from someone whose organization represents parents.  But another commissioner, Middlesex County District Attorney Marian Ryan agreed, saying that the way the appendix is presented “It’s hard not to read it as this is what the commission agrees to … It’s hard not to think this is where we came out.”

Still another commissioner, Angela Brooks, director of the Massachusetts Attorney General’s Children’s Justice Unit, said she had thought that Appendix A would include only the areas where there was agreement.  She was surprised to see included highly controversial ideas, such as drastically increasing penalties for failure to report.

The Commission voted down the proposal to get rid of Appendix A.  Nor would they accept Brooks’ idea to limit it to where there was consensus.  Since there were no formal votes, Mossaides said, how can we possibly know where there’s consensus?  Actually, anyone who watched the meetings easily could figure that out.

Mossaides and the rest what should be called the “surveillance-state caucus” would agree only to changing the language to make clear that the recommendations in Appendix A were never put to a vote and there was disagreement over some of them.  Then they immediately worked to undermine such language – by adapting the Big Lie of American child welfare, the false claim that child safety and family preservation are at odds - in a way that reveals a stunning degree of racial bias.

Katie Ginnis of the state Executive Office of Health and Human Services, who is, if anything, more extreme than Mossaides, suggested that any such language be framed as the commission “trying to balance the welfare of children and these societal issues …How can we make changes in the interest of protecting children and be mindful of the disproportionate impact on Black and Brown families? We need to represent that tension.”

Mossaides echoed the false framing, saying the language should talk about “balancing child protection and disproportionate impact on children of color.”

What could be more emblematic of racial bias than suggesting that racial justice is contrary to child safety? 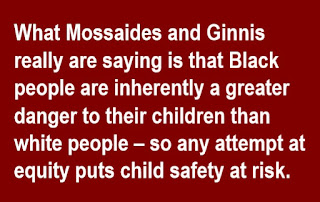 What Mossaides and Ginnis really are saying is that Black people are inherently a greater
danger to their children than white people – so any attempt at equity puts child safety at risk.  The idea that the disproportionate impact of the child welfare surveillance state on Black families (and, in Massachusetts, Hispanic families) might have something to do with racism is not even on the table.

Also, though nonwhite families are disproportionately harmed by needless removal and the children welfare surveillance state, they are not the only ones harmed.  Impoverished white children also are subjected to needless surveillance, traumatized by needless investigations, and abused in foster care.  And overloading the system with false reports from all those mandated reporters makes it harder to find the few children in real danger – so contrary to Mossaides’ and Ginnis’ claims, most of the recommendations in Appendix A would make all Massachusetts children less safe.

To her credit, Brooks wasn’t buying Mossaides’ and Ginnis’ framing.  She challenged the idea that “one side is expressed as protecting children and the other is societal inequities.” She said dissenting commissioners “are also [concerned about] protecting children; we’re concerned about the harm to children when unnecessarily removing them.  The tension on how best to protect children is on both sides.”

Brooks also expressed concern about the “lack of representation by impacted communities and families” on the commission itself.  “We got good and meaningful testimony [at the hearings],” she said, “but that’s not the same thing as having full-time commission members sharing their perspectives.”

To which Mossaides offered a reply that really amounted to: If she were choosing the commissioners it would have been different, but it wouldn’t have mattered anyway.

In still another indication of the surveillance-state caucus’ extremism, one section of the draft report dared to mention the fact that some hearing witnesses proposed abolishing mandatory reporting altogether.  The reason this idea is getting a lot of new support is that mandatory reporting has backfired; studies show it drives people away from seeking help and overloads the system with false reports, making it harder to find children in real danger.

But the draft language left the impression that the commission never even thought about having a full discussion of something that, to Mossaides, is so horrifying.

But even this wasn’t enough for at least one commissioner, who suggested that the fact that this idea came up at the hearings should not even be mentioned (presumably to avoid the possibility of legislators having their minds poisoned by such terrible ideas).

Unfortunately, many commissioners didn’t take into account the public comments.  But it’s encouraging that enough of them did to prompt the kind of debate that took place at Thursday’s meeting – and maybe encourage legislators to do a little of that dangerous thinking after all.

Posted by National Coalition for Child Protection Reform at 1:18 AM