In Massachusetts, the “child welfare” agency regularly throws battered women – and, especially, their children – under the bus. Now they’re fighting to keep it that way

Of all the tragedies inflicted on children by the nation’s family policing agencies (a more accurate term than “child welfare” agencies), few are worse than tearing a child away from a parent (usually a mother) whose only “crime” is to herself be a survivor of domestic violence.

All of the trauma for a child is compounded if the removal was for this reason.  One expert called it “tantamount to pouring salt into an open wound.”  He testified in a lawsuit that led to making the practice illegal in New York State. (NCCPR’s Vice President was co-counsel for plaintiffs.)  But, as I’ve often written before, in much of the country, family police agency policy on this issue boils down to “please pass the salt.”  That is certainly true in Massachusetts.  And the state family policing agency is fighting tooth and nail to keep things just the way they are.

As with so much that’s wrong in child welfare, the harm begins with mandatory reporting.  A battered woman works up the courage to break free from her abuser, often for the sake of the children.  But almost anywhere she turns for help, the helper is a “mandated reporter.”   Whether that reporter thinks it’s a good idea or is just afraid to do otherwise, the reporter may well call the family police.  If you want to know what happens next,  please take two minutes – just two minutes – to listen to this excerpt from the testimony of Western Massachusetts Attorney Michelle Lucier before a commission studying mandatory reporting in that state:

(If you want to hear more, a recording of her full testimony is at the end of this post.)

Then, for additional context, please read the testimony from Jane Doe, Inc, the Massachusetts Coalition Against Sexual Assault and Domestic Violence.  That will give a full understanding of how widespread the problem is – and how it places both battered women and their children in danger by deterring them from reaching out for help.  National research confirms it.

But at a Commission meeting this week, the Massachusetts Department of Children and Families (DCF) and its parent agency, the Executive Office of Health and Human Services (EOHHS), responded to that searing testimony with what amounts nothing but contempt for the lives and safety of battered women and their children.

They opposed even a revision in mandatory reporting laws so small that it would change almost nothing.

As a commission document explains, the commission is debating recommending that

persons who provide direct confidential services to victims of domestic violence, sexual assault, or human trafficking should be excluded from mandated reporting responsibility. The reasoning behind the proposed exclusion is to reduce the barriers, or perceived barriers, in the way of persons who may be seeking immediate physical safety. Persons who seek physical safety are likely to be seeking to improve the safety situation for their children. 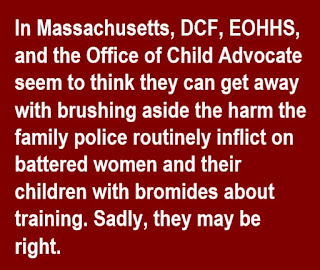 Now, stop and consider how small that change would be.  First, it does not stop anyone from reporting what they believe to be child abuse or neglect.  It says only that a small subset of mandatory reporters, those specially trained to deal specifically with battered women seeking safety are not required to turn those women in to the family police.  Instead, they can use their professional training and their professional judgment.

As Jane Doe, Inc. pointed out, this does not go nearly far enough, because survivors

will likely encounter a mandated reporter in a range of additional contexts such as education, healthcare, or other settings.

Yet even this tiny proposed change ran into fierce opposition from the representative on the Commission from DCF, Cristina Tedstone, and from EOHHS Katherine Ginnis.  (Ginnis’ comments throughout the commission meetings suggest someone even more virulently opposed to any curbing of the Massachusetts child welfare surveillance state than the commission chair, state Child Advocate Maria Mossaides – and that’s saying a lot.)

Adding insult to what often are literal injuries, Ginnis and Tedstone suggested the problem of battered women terrified to come forward for fear of mandated reporters turning them in could be solved by – you probably guessed: more training!

We should just add to the training for mandated reporters, Tedstone and Ginnis say, so they’ll know when to turn in a battered mother and when not to.  And we should train our investigators in when to take away children (after already traumatizing them with needless investigations) and when not to.

To get a sense of how insulting this is, particularly to families of color, imagine if a special commission were convened to study police brutality in Massachusetts. Imagine if they said that all the problems could be solved if we just gave the police more training. Imagine if they claimed the problem isn’t, say, massive use of stop-and-frisk policing; we just need to give the police more training in whom to stop and how to frisk them.  People would immediately recognize it for what it was: a whitewash – in every sense of the term.

Yet somehow, in Massachusetts, DCF, EOHHS, and the Office of Child Advocate seem to think they can get away with brushing aside the harm the family police routinely inflict on battered mothers and their children with bromides about training. Sadly, they may be right.

The idea of training-as-panacea is particularly ludicrous in the context of domestic violence survivors coming forward. 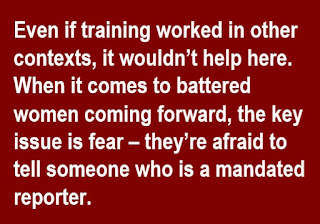 For starters, DCF doesn’t even admit it has a problem.  How can they train workers to do better when everything supposedly is fine now?  DCF brags about having “domestic violence specialists” on staff who caseworkers can consult right now.  But as the testimony from Jane Doe, Inc., Michelle Lucier and others makes clear – that’s not working. The problem is severe and ongoing.

But even if training worked in other contexts, it wouldn’t help here.  When it comes to
battered women coming forward, the key issue is fear – they’re afraid to tell someone who is a mandated reporter.  Do Tedstone, Ginnis and Mossaids seriously think that will change if someone posts a notice somewhere that says: “Don’t worry, that mandated reporter you’re thinking of talking to was required to take a new, improved training module – so they might not turn you in after all!”?

And, of course, DCF and EOHHS’s faith in training reeks of hypocrisy.  The recommendation they oppose says only that people who really do have specialized training in dealing with these issues should be allowed to use that training and exercise their own judgment.

The opposition from DCF and EOHHS and, it appears, from Mossaides does not automatically mean the proposal will be voted down.  But none of the Commissioners at the meeting this week spoke in favor of it.*

In the end, all of these issues will be in the hands of the Massachusetts Legislature.  The lawmakers will have to decide whether DCF should continue to have free reign to throw battered women and their children under the bus.

So I hope they will listen to all of what Michelle Lucier had to say, read Jane Doe Inc.’s full testimony, and go through the rest of the public hearing testimony, which overwhelmingly opposed the approach that has dominated commission deliberations.  They can start here:

*-In contrast, it was encouraging to hear some opposition expressed to another Commission proposal – inserting into state law a definition of child “neglect” that omits any statement that poverty is not neglect.  Such a statement exists in current DCF regulations. Granted, the fact that Massachusetts regularly tears apart families at a rate 60% above the national average makes clear that no one is really paying attention to the poverty-is-not-neglect caveat, but that’s no reason to make things even worse.

Posted by National Coalition for Child Protection Reform at 3:40 AM