In Massachusetts, the “Child Advocate” wants to spin EVERYTHING. Falling for the spin will hurt children.


Well, I suppose Massachusetts Child Advocate Maria Mossaides deserves credit for chutzpah.  Having just led, a better term would be – misled a commission into making draft recommendations that would make racial bias in child welfare worse, she now says her office should be tasked with studying whether the problem even exists.

I’ll get to that below, first some background.

There’s a script everyone is supposed to follow when the death of a child “known to the system” gets a lot of attention.

● Politicians rush to express their shock and outrage.  Some agency or organization, an existing agency or maybe a “Blue Ribbon Commission,” issues the requisite scathingreport. (It’s always described as a scathing report so we might as well make it one word.) In Massachusetts, the job of issuing the scathingreport falls to Mossaides.

● The scathingreport is filled with recommendations to make the child welfare surveillance state more draconian – make it easier to take children away, make it harder to return them home or both.

● Legislators hold the obligatory public hearing and issue press releases about “cracking down on child abuse.”

● The system is further overwhelmed by more families needlessly investigated and more children needlessly taken away. So workers have less time to prevent the next tragedy.

Then the entire cycle repeats.

But in Massachusetts, one state legislator has decided not to follow the script.

As CommonWealth Magazine reports, at a hearing concerning the most recent tragedy to set off this cycle of despair, the death of David Almond, State Sen. Adam Gomez, a Democrat from Springfield, asked a simple question of Mossaides: Was the real reason Almond was returned to a dangerous home something that is nowhere mentioned in the scathingreport. Was it because the family is white? 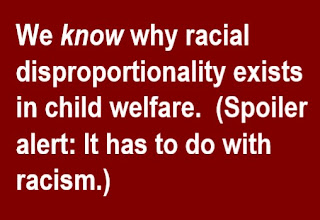 Mossaides apparently was flummoxed.  This wasn’t in the scathingreport, and it’s certainly not in the “script.”  But she hinted at the excuse those “in denial” always use when confronted with racial bias in child welfare.  She noted that, historically, child welfare agencies have always focused on poorer families. Given minority poverty rates, that has translated into “a disproportionate surveillance on communities of color,” she said.

The irony, of course, is that for decades child welfare agencies denied that, too.  They said they never simply investigated children because of poverty.  But confronted with their racial bias, apparently they’ll cop to class bias.

In fact, the evidence is overwhelming that it’s class bias and racial bias.

But the thing about Mossaides is, she wants to be the one to spin everything in Massachusetts child welfare.  So, CommonWealth Magazine reports,

Mossaides said in her testimony that she would like the Legislature to give her office money to do a qualitative review of the DCF caseload to determine why racial disproportionality exists, with an emphasis on what happens when a complaint is first filed. “We need qualitative data in order to figure out where the problem is so we can make recommendations about what we think proposed solutions might be to reduce disproportionality,” Mossaides said.

Where, oh where to begin.

● Prof. Dorothy Roberts explained it all in her book, Shattered Bonds: The Color of Child Welfare,– 20 years ago.  She explained it again – directly to Mossaides – just last month.

● Mossaides has been Child Advocate since 2015.  Did she only just notice there’s a racial bias problem?  And wouldn’t that delayed recognition alone make her among the least qualified to oversee such a study?

● As noted above Mossaides is leading – or more accurately – misleading a commission she chairs on mandatory reporting into making a series of recommendations that would worsen racial bias in the system.  She so misled the commission that members said they were “shocked” “surprised” and “taken aback” when, at the last minute, when finally public hearings were held, they heard the other side of the story.

Then, at the commission’s most recent meeting, Mossaides got it wrong again - telling her fellow commissioners that if Massachusetts abolished mandatory reporting it would cost the state’s family policing agency, the Department of Children and Families, $400 million.  The real figure is more like $1.5 million.

● The commission itself is strikingly lacking in diversity.  Yet, in the nearly two years it’s been active I am aware of no public expression of concern about this from Mossaides.

So it should be apparent that if anyone still believes the issue of racial bias in child welfare needs “more study” the study should not be led by Maria Mossaides.

Trying to spin poverty as well

Mossaides also has been thrown on the defensive by all the testimony at recent commission public hearings about the widespread confusion of poverty with neglect. 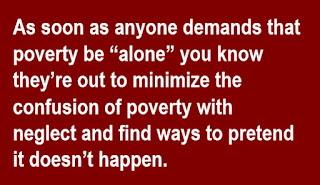 So now she’s trying to co-opt that issue in much the same way, by suggesting that her office do a “qualitative review” of cases to see if people are really calling in reports alleging child abuse “just” because of poverty or because of “poverty alone.”

But as soon as anyone demands that poverty be “alone” you know they’re out to minimize the confusion of poverty with neglect and find ways to pretend it doesn’t happen.

The thing about poverty is, it tends to have company.  Poverty breeds other problems.  So all someone like Mossaides needs to do is say: “See, in that case we sampled there was some other problem as well – so it wasn’t a poverty case!” Then the study she commissions and she oversees concludes that DCF doesn’t take children because of poverty “alone.”

But if poverty caused the depression, odds are money will cure it.  And if it doesn’t quite do the job, money can also buy whatever therapy this parent might need – just as it does for “depressed” parents in Weston or Wellesley or Longmeadow.

All that said, a qualitative study still would be a good idea -- under three conditions:

● The terms of reference are broader: The question in each case should be: Could this have been handled without calling in an agency that has the power to take children away and otherwise coerce families?

● The people doing the study represent not just racial and ethnic diversity but viewpoint diversity – as happened in 2005 when New Jersey’s then-Child Advocate, Kevin Ryan commissioned such a study.

● Maria Mossaides and the Office of Child Advocate are not allowed anywhere near it.