After years of ignoring, or impeding, racial justice in child welfare, the group calling itself “Children’s Rights” now claims it’s “driving” the conversation about that very issue.

No, CR. You just climbed into the backseat.

In a story about a new report on racism in child welfare from the group that calls itself Children’s Rights, The Imprint includes a question I posed:  Is this a sincere effort to change, or just a callous ploy to raise money?

The lead author of the report, attorney (and relatively new hire at CR) Shereen White had a good answer:

“The answer will live in our work, whether it’s the recommendations we lay out in our report, or the actions we take in the future."

● The report quotes others who want to repeal the so-called Adoption and Safe Families Act, a racist law that has done enormous damage to children of color – but is silent on whether CR will support such efforts, or even support more modest changes to ASFA.

● The report acknowledges that another awful federal law, the Child Abuse Prevention and Treatment Act “strengthened the child welfare surveillance state” (see what I mean about familiar phrases)?  Yet it is silent about the need to repeal or even amend CAPTA.

● The report discusses narrowing neglect laws. Yes, we should do that.  I first suggested that in a book I wrote in 1990.  But what I came to realize is that this does almost no good unless there is someone to enforce it (as is discussed below, the report does seem to recognize this much).  This is illustrated, by accident, when the report cites as a model the neglect definition in Iowa – but Iowa tears apart families at one of the highest rates in the nation.

● Yes, we should require states to make “active efforts” to keep families together, not just reasonable efforts. But how does CR propose to enforce it, when even the requirement in current federal law to make “reasonable efforts” is not enforced?  Indeed, in Michigan judges admitted they lied and checked a box on a form stating reasonable efforts had been made even when the judges themselves didn’t believe it.  But though, CR has a lawsuit settlement in Michigan, discussed in detail below, that settlement is silent on this issue. 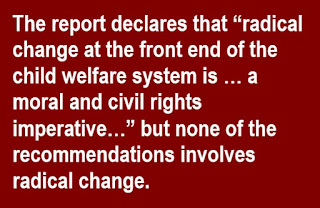 The recommendations in the report are not bad; three are genuinely useful, most notably providing high-quality family defense – which would help do things such as enforce a narrower definition of neglect.  That means CR is going farther than all those other child welfare establishment groups who are just posting #blacklivesmatter statements on their websites and hoping the whole thing will blow over. And just having an establishment group using the rhetoric of real change may help.

But many of CR’s significant recommendations, such as high-quality family defense, originated with other organizations, and that’s important for reasons I’ll discuss below in the section on CR’s marketing.

So, by Ms. White’s criterion, whether this report represents real change or a marketing ploy all comes down to the actions CR takes in the future.  Those actions should involve undoing some of the damage they’ve done in the past.

Throughout its history, Children’s Rights has occasionally been a force for good – often by accident. More often it’s brought McLawsuits that lead to settlements that make systems bigger without making them better.  In some cases, they have made systems worse.

In Michigan, for example, as we explain in our publication The Children Wronged by Children’s Rights.

Instead of requiring Michigan to do [cut caseloads] by controlling needless removal of children and bolstering programs to keep children out of foster care, the settlement allowed Michigan to slash its already meager funding of prevention and family preservation in order to fund a child abuse investigator/foster care worker hiring binge. And that’s exactly what the state did.

The state also cut basic assistance to poor families – and said it wasn’t a problem because, thanks to the settlement, they also were hiring more child abuse investigators.

The Michigan settlement also imposed strict new requirements forcing any relative who
wants to provide kinship foster care to meet the same rigid, hypertechnical licensing requirements as middle-class strangers.  Those requirements revolve more around middle-class creature comforts than health and safety.  And since relatives of poor children taken from their homes tend to be poor themselves, they often can’t meet them.  In many cases, relatives had to stop caring for children already in kinship care.

CR settlements also threw up barriers to kinship care in Rhode Island and Wisconsin. And in Georgia, Mother Jones reports, the state did what Michigan did: "cut spending on child care and put the money into child protective services in the wake of a lawsuit against the state over the mistreatment of children in foster care."

Show us the lawsuits

So, had CR, at the same time as it released the report said that they were writing to the Governor of, say, Michigan and asking to reopen their settlement to conform to the principles CR now claims to espouse, that would have been impressive.  But they didn’t.

And while the report suggests strategies for future lawsuits aimed at curbing needless removal of children from their homes, CR did not actually announce such a suit.

Indeed, the report seems to reveal an organization at war with itself.

In one of those preface-type “letters” almost nobody reads, CR’s executive director, Sandy Santana seemed to maybe, possibly sort-of apologize:

“For Children’s Rights, writing about the history of Black experiences in the child welfare system has led us to critically reflect on our own history in child-focused civil rights litigation.  We recognize that in the past our overarching belief that no child should grow up in the foster care system blinded us to the ways in which our legal cases, and the reforms they delivered, did not always support the preservation of Black families.”

But the very last paragraph of the report itself seems to say: Pay no attention to what Sandy Santana said at the beginning. The report closes by setting up a straw man:

At the same time, Children’s Rights will not stop fighting to protect the rights of children and families already in the system. These children and families can never be forgotten or effectively viewed as casualties of a changing child welfare system, even as advocates successfully drive radical transformation, and ultimately abolition, of that system.

No one has ever said CR shouldn’t protect the rights of children in the system.  What we have said is that much of their litigation makes things worse, because they have ignored the entire issue of wrongful removal.  Furthermore, though they say “These children and families can never be forgotten …” for decades CR’s litigation – the very litigation that closing paragraph defends – has forgotten families.

The reason I raised the issue of whether the whole thing is a fundraising ploy is because, whether intended or not, the marketing of the report comes across like an effort to bigfoot smaller organizations that have actually led this fight at a time when racial justice is an attractive cause for foundations.

Even before releasing the report, CR started fundraising off it.  In a fundraising email, CR claims to be “driving a national conversation about the urgent need to end unjust government intervention in the lives of Black children and families.” [Emphasis added.]

No. That conversation is being driven by, among others, Dorothy Roberts, and Joyce McMillan, and Movement for Family Power, and Rise and DCFS-Give Us Back Our Children,  and  #ReimagineChildSafety and the UpEnd Movement and the Shriver Center on Poverty Law, and Isuroon, and Kelis Houston and Vivek Sankaran, and Victoria Copeland, and Angela Olivia Burton, and Judge Ernestine Gray, and J. Khadijah Abdurahman and Maleeka (MJ) Jihad and Angeline Montauban and Jessica Pryce and Tehra Coles and Shanta Trivedi and Kelley Fong and providers of high-quality family defense all over the country.  It also was driven by groups that didn’t survive, even as CR raked in money at glitzy celebrity fundraisers, groups such as the Child Welfare Organizing Project, People United for Children and Concerned Citizens for Family Preservation, and so many other groups and individuals who were fighting this fight when CR was on the sidelines – or impeding it.

The closest CR came to acknowledging any of this was having Prof. Trivedi speak at an event launching the report.

In fact, if you really want to meet the drivers of the conversation, check out the presentations at next week’s Strengthened Bonds virtual conference commemorating the 20th Anniversary of Prof. Roberts’ book: Shattered Bonds: The Color of Child Welfare.  CR isn’t among them.

Driving the conversation? No. Children’s Rights just climbed into the backseat.

…and a meaningless “pledge”

Similarly, in another email, CR asks people to sign something called “The Children’s Rights Pledge” in which you pledge to “disrupt institutional racism” in child welfare by – well, uh, by naming it.  If that doesn’t seem like much, take a closer look. The “pledge” is just a way to harvest email addresses for future fundraising pitches.

The agenda CR released in its new report would have been an impressive, progressive agenda – in 1995. The people who are really driving this conversation are way ahead of this.

So, how will we know that change at CR is real?

● If they call for repealing ASFA and fight for it.  If the former head of the Children’s Bureau, Jerry Milner can do it – and he did - why can’t CR?

● If they call for repealing CAPTA.

● If they apologize, without reservation, for their own past role in at best ignoring at worst perpetuating the harm they now decry.

● If they put their lawsuits where their rhetoric is and sue to stop needless removal of children.

● If they seek to reopen their most harmful settlements.

● If they leave the driving to those who have earned a place at the wheel.

Posted by National Coalition for Child Protection Reform at 5:04 AM