Los Angeles child welfare and the definition of insanity


If the definition of insanity really is doing the same thing over and over and expecting a different result, then politicians and child welfare officials in Los Angeles need what parents so often are put through when child welfare agencies get into their lives: a psychiatric evaluation.

Do we really have to go through this again?

Do we really have to go through another round of preening, posturing, finger-pointing and general sound and fury signifying nothing in the aftermath of a horrible child abuse death?  Do we really need another round of “[name of politician here] demands answers”-type press releases?  Don’t political leaders in Los Angeles finally owe the county’s most vulnerable children more?

Those are the questions we should be asking after the latest high-profile death of a child “known to the system” – the death of Anthony Avalos.  But so far, all we’ve gotten is more of the same. Take out the name Anthony Avalos and substitute Gabriel Fernandez, or Yonatan Aguilar or Dae’von Bailey or Lars Sanchez, among other Los Angeles child welfare tragedies, and you could barely tell the difference.

That’s because the real root of the problem is that Los Angeles takes away too many children, not too few. That overloads the system, leaving less time for workers to find children in real danger. Each time there’s a high-profile death it sets off a foster-care panic – encouraged by those grandstanding politicians. Even more children are taken needlessly. So workers have even less time. So the cycle repeats over and over.

It happens almost everywhere, of course.  But part of the reason it’s often worse in Los Angeles is that Los Angeles child welfare has long suffered from being overseen by one of the worst governing bodies in America on these issues, the Los Angeles County Board of Supervisors – or as I’ve called them before, the B.S.

In 1954, Sen. Ralph Flanders of Vermont denounced his notorious colleague Joe McCarthy in words that need be changed only slightly to explain the modus operandi of the Los Angeles County Board of Supervisors in child welfare cases. To paraphrase Flanders:

They don their war paint; they go into their war dance; they emit their war whoops; they go forth to battle -- and proudly return with the scalp of a social worker.

Though there’s been a lot of turnover on the B.S. in recent years, when it comes to child welfare, most of them share their predecessors’ fondness for clueless grandstanding.

Consider this statement from supervisor Kathryn Barger, who said that after Gabriel’s death:  “I didn’t think something like that could happen again…”

In fact, it’s never stopped happening.  Every year, among the tens of thousands of cases investigated by the Los Angeles County Department of Children and Family Services, there are some in which warning signs, sometimes subtle, sometimes achingly obvious, are overlooked.  And every year some of those children die.  It’s just that every few years, for reasons ranging from particularly horrible details to random chance, media and politicians fixate on a single case.

That distorts our entire perception of what’s wrong with DCFS and how to fix it.  Child welfare systems are more secret than the CIA.  They can hide almost all their blunders behind “confidentiality.”  Almost the only time we see their failures is when a child “known-to-the- system” dies. So we assume that all the errors go in only one direction – leaving children in dangerous homes.

But child welfare systems are arbitrary, capricious and cruel – they err in all directions.  They tear many children from their homes needlessly, often when family poverty is confused with neglect.  In other cases, there are real problems but they could be solved without resorting to traumatizing the children by taking them from their homes.

Lessons from the border

One need only look about 129 miles south of Los Angeles, to the Mexican border, to see just how horrible such separation can be.  A professor of pediatrics called the trauma of separation “catastrophic.” 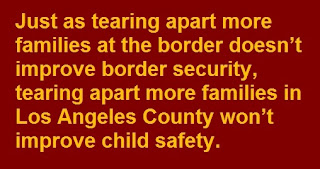 Remember those sounds of crying children smuggled out of a detention center and published by ProPublica?  It doesn’t matter if the person separating parent from child is a border patrol officer carrying out a policy of pure evil or a DCFS caseworker with the best of intentions – the children shed the same sorts of tears for the same sorts of reasons; the damage done to them is the same.  So it’s no wonder massive studies have found that, in typical cases, children left in their own home fare better even than comparably maltreated children placed in foster care.

That harm is done even when the foster home is a good one. The majority are. But study after study has found abuse in one-quarter to one-third of foster homes. As for group homes and institutions: The record in California speaks for itself.

The typical response to high-profile tragedies – the general chest thumping and calls for heads to roll - makes everything worse. Workers become terrified of having the next tragedy on their caseload and facing everything from media censure to criminal charges. So there’s a foster-care panic: Workers rush to inflict more catastrophes on children by taking more of them needlessly.

That only makes the other kind of catastrophe – the death of a child “known to the system” – more likely, because overloaded workers have even less time to find children in real danger.

Already the so-called Chronicle of Social Change, the Fox News of child welfare, is laying the groundwork for the next foster-care panic in Los Angeles. The Chronicle ran a story that seeks to justify the panic in advance, arguing, in effect: What do you expect? More people call in reports alleging child abuse so of course more children will be removed. 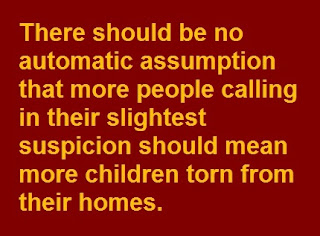 But often, during foster-care panics the increase in removals far exceeds the increase in reports.  And because, during a foster-care panic, anyone and everyone is hectored repeatedly to report anything and everything, no matter how absurd, a greater proportion of reports is likely to be false. There should be no automatic assumption that more people calling in their slightest suspicion should mean more children torn from their homes.

(A quick reminder of Heimpel’s track record: He has analogized the increase use of family preservation to cancer, dismissed concerns about racial bias in child welfare as a “panic” and published and promoted a column using a vile racial stereotype to attack one of the mothers profiled in the New York Times story about foster care as the new Jane Crow.)

Nor will we fix the system by taking all the human biases that exist now and automating them. That’s what the current fad sweeping through child welfare, “predictive analytics” really is all about.  Predictive analytics involves using masses of data about people – mostly, it turns out, poor people – and coughing up a score that supposedly tells workers for agencies like DCFS who is most likely to abuse a child.

Contrary to a column in the Los Angeles Times by Naomi Schaefer Riley (the same Naomi Schaefer Riley who was barred from blogging for an education trade journal after writing a column widely viewed as racist) the first Los Angeles experiment with this approach was not dropped because the county used a private company. It was dropped because the software produced a false positive rate of 95 percent.  As Judge Michael Nash, director of the county’s Office of Child Protection explained, 95 percent of the time, the software labeled as “high risk” children “who were not at risk for a negative outcome.”

The same column goes on to praise the predictive analytics experiment in Pittsburgh.  But, as I discuss here, that experiment doesn’t correct the biases of humans, it magnifies them.  In her book, Automating Inequality, Prof. Virginia Eubanks aptly called it “poverty profiling.”

Los Angeles already takes away children at more than double the rate of New York City and more than triple the rate of Chicago, even when rates of child poverty are factored in. There is no evidence L.A. children are two and three times as safe from abuse.

If the definition of insanity really is doing the same thing over and over and expecting a different result, then politicians and child welfare officials in Los Angeles need what parents so often are put through when DCFS gets into their lives: a psychiatric evaluation.

No large child welfare system in America ever has been able to stop every child abuse death – just as no police department can stop every murder.  But the few that do better at curbing child abuse have one thing in common: They do far more than Los Angeles to keep families together and avoid needless foster care.

Why not try that for a change?