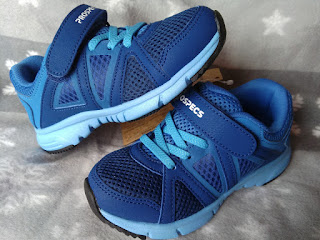 UPDATE, NOV 12, 2018: To its great credit, the Chronicle has offered a full apology. I believe it is sincere.  As far as I am concerned, the slate is now clean.

As many of my friends know, I often referred to writing for a child welfare trade journal that calls itself the Chronicle of Social Change as analogous to being the token liberal at Fox News. It’s not that the Chronicle has a right-wing agenda, but it has a strong take-the-child-and-run agenda.  (The issue of writing for them is moot – they’ve rejected my last four columns, including this one.)

But I didn’t think even the Chronicle would allow blatant racial stereotyping in its columns.  My mistake.

Shortly after The New York Times published its landmark story about foster care as the new “Jane Crow” a more truly fair and balanced trade journal, Youth Today, decided the story was so important it linked to the story from the top of its homepage.  The Chronicle, on the other hand, treated the story the way Fox News treats revelations about Russian meddling in the 2016 election: Story? What story?

Until, that is, Marie Cohen was ready to complain about the Times story. Cohen is the Chronicle’s 2016 “Blogger of the Year.”  Her views often are similar to those of Chronicle publisher Daniel Heimpel.  Both are, like most people in child welfare, well motivated. In their own way, both really want to help vulnerable children. But that does not excuse what Cohen wrote, or the fact that the Chronicle published it without even a disclaimer - and promoted it on social media.

Cohen’s argument seems to be that the Times dared to report on the problem of needless removal of children in New York City without discussing in detail, in the same story, the fact that sometimes children known to the city’s child welfare agency die. She cited a recent case in point, the death of Zymere Perkins. In fact, the Times has published scores of stories on such tragedies. The fact that the Times devoted even one story to wrongful removal is simply more than Cohen can bear.

Had she stopped there, then the column would have been pretty much like almost every other column Cohen writes. But she didn’t stop there.  And that’s where the racial stereotyping comes in.

Though the Times story cited many cases of needless removal, Cohen focuses only on one.  The way she writes about it is disturbing.

Maisha Joefield thought she was getting by pretty well as a young single mother in Brooklyn, splurging on her daughter, Deja, even though money was tight. When Deja was a baby, she bought her Luvs instead of generic diapers when she could. When her daughter got a little older, Ms. Joefield outfitted the bedroom in their apartment with a princess bed for Deja, while she slept on a pullout couch.

Here’s how Cohen paraphrases that paragraph and comments on it:

Reporters Stephanie Clifford and Jessica Silver-Greenberg began with a description of Maisha Joefield, a mother who “splurged” on her daughter even when money was tight. For example, the reporters added helpfully, Ms. Joefield “bought her Luvs instead of generic diapers when she could.”

It is odd to me that the authors seem to consider splurging on brand-name diapers, sneakers, or apparel to be an indicator of good motherhood.

Sneakers?  What sneakers?  The Times story never mentions sneakers – or any other “apparel” aside from the diapers.

I don’t know why Cohen brought sneakers into the discussion. I do know that there is a crude, pernicious racial stereotype that says African-Americans are poor because they waste money on expensive sneakers.

It’s a staple of right-wing rants on internet comment boards. In one such rant on Glenn Beck’s site, The Blaze, about “HOW TO PREVENT BLACK CHILDREN FROM GETTING MURDERED” (caps in the original, of course) a commenter writes: “#5 INSTEAD OF BUYING THEM EXPENSIVE SNEAKERS AND SMARTPHONES - BE A REAL PARENT.”

(If editors at the Chronicle still don’t see the problem, I recommend they  read this.)

The Chronicle not only published Cohen’s exercise in stereotyping, it promoted it on Twitter and Facebook. Heimpel even promoted it in his personal twitter feed. All this, just four days after the tragedy in Charlottesville, a time when, one would hope, editors would be extra careful about racial stereotypes. 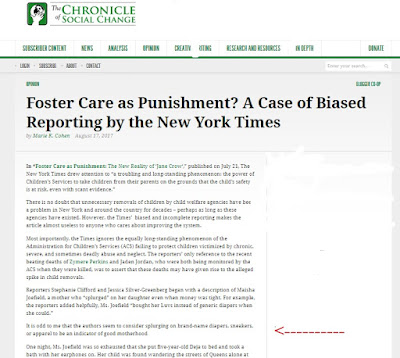 By the way, if you did not see the part about sneakers when you clicked on the link to Cohen’s column, it means that the Chronicle decided to sanitize it by editing out the offensive words, while leaving the rest of the column. (As is discussed below, there’s a precedent for that.)  So on the right you'll find a screenshot of the original, just in case.

Coping with issues of race

This is not the first time Cohen has had difficulty coping with issues of child welfare and race.

In another column, Cohen claimed that a group known as the Alliance for Racial Equity in Child Welfare “quietly suspended its work” a claim so obviously false the Chronicle felt compelled to add a correction – but only after it had stood uncorrected for weeks.

Or consider Cohen’s take on “predictive analytics” a form of computerized racial profiling, that I have called the stop-and-frisk of child welfare.

During the 2016 campaign, former house speaker and early Donald Trump supporter Newt Gingrich said this in defense of stop-and-frisk:

You run into liberals who would rather see people killed than have the kind of aggressive policing … And a lot of the people whose lives were saved because of policing in neighborhoods that needed it the most, were minority Americans.

As to the concern about racial profiling that has haunted the predictive analytics debate, I find it very hypocritical. Letting more black children die to protect them from racial profiling cannot possibly be an ethical approach or one that is endorsed by responsible child welfare leaders.

The Chronicle persuaded Cohen to delete the paragraph, but it was briefly published by mistake.

In yet another column, Cohen complains that “As a social worker in the District of Columbia, I was subjected to multiple low-quality, heavy-handed trainings that tried to help me discover my hidden biases.”

The Chronicle owes the African-American community, and all of its readers, an apology for publishing a column from its “Blogger of the Year” that indulges in racial stereotyping.

Another cheap shot at the mother

The sneaker remark was not Cohen’s only comment about Ms. Joefield’s case. Here again is what the Times wrote:

One night, exhausted, Ms. Joefield put Deja to bed, and plopped into a bath with her headphones on.

“By the time I come out, I’m looking, I don’t see my child,” said Ms. Joefield, who began frantically searching the building. Deja, who was 5, had indeed headed for the grandmother’s house when she couldn’t find her mother,[as she had been taught to do] but the next thing Ms. Joefield knew, it was a police matter.

The reporters quote legal aid attorney Scott Hechinger as saying, “In another community, your kid’s found outside looking for you because you’re in the bathtub, it’s … a story to tell later … In a poor community, it’s called endangering the future of your child.”

I don’t know where Mr. Hechinger lives, but I have never heard of a friend or neighbor alone with a small child putting on earphones and listening to music so loud with the bathroom door presumably closed that her child could not hear her.

First of all, the fact that Cohen hasn’t heard of something doesn’t mean it never happened.  If a friend or neighbor had done this, or made any other mistake in the course of raising a child,  s/he might not rush to confide in Marie Cohen.

While discussing the story on WNYC Public Radio, one of the Times reporters, Jessica Silver-Greenberg, said that after the story ran, she got an email from an editor at the Times who said something similar had happened to him. One night “one of his daughters woke up and couldn’t find him, or couldn’t see him immediately, and she wandered out in her underwear to a neighbor’s house.” Yes, it was “panic-inducing” at the time, but now it’s just a funny story. The editor told Silver-Greenberg that “This has become family lore.”

Cohen might argue that the Times editor did not specify where he was; he says nothing about bathing or headphones. But the point is, his child couldn’t find him and did exactly what Ms. Joefield’s child did.

Not that Cohen is alone in her sentiments. Some readers expressed similar views in the comments section for the Times story. That prompted this response from someone identified only as LF:

I love these sanctimonious, would-be-perfect-parents-if-they-ever-had-kids commenters with their pockets full of stones. They would never, NEVER take a bath after the kids were down for the night. Heavens! They would never walk downstairs to the front door with a child alone upstairs. Abuse!

No, these glorious specimens of perfect, theoretical motherhood wouldn't sleep, eat, bathe or use the bathroom. They would follow the child around, day and night - filthy, haggard, unwashed, eating the occasional granola bar, dressed in an adult diaper, with their eyes pinned open, Clockwork Orange style, just staring, staring, staring at their child. That's how you raise the perfect child, apparently - with constant, frantic monitoring. Oh, how well-adjusted those kids are going to be.

Cohen’s column also displays a misunderstanding of key data provided by the New York City child welfare agency. That will be discussed on this blog tomorrow.
Posted by National Coalition for Child Protection Reform at 6:00 AM