In a column for Youth Today last month, I wrote about how the state’s own “Peer Review Team” report found that in metropolitan Tampa, Florida, far too many children were being needlessly taken from their parents and consigned to the chaos of a foster care system so awful that some of them were literally parked all day in a convenience store parking lot.

In a follow-up column for this blog I noted that things are only likely to get worse. That’s because of who has been chosen as head of “community-based care” for Eckerd Connects, the embattled agency that’s sort of in charge of child welfare in the region.  Eckerd chose Chris Card. Card has a long, ugly history of supporting a take-the-child-and-run approach to child welfare.

I concluded that column this way:

Granted, a primary tenet of the family preservation movement is that people can change. But does Chris Card want to change?

Unfortunately, it looks like the answer already is in: No, he doesn’t.

The answer came in a story in the Tampa Bay Times. (As usual, the Times was playing catch-up to WFLA-TV, which had the same story days earlier.) It concerns the “corrective action plan” Card’s agency has to submit to the state.

The Times story finally mentioned the “Peer Review Team” report’s findings about the high rate of removal in Hillsborough County - while failing to mention that the report said this high rate of removal was unnecessary and illegal.  Then the story quoted Card, who declared:

And the fact that a team of your own “peers” said it’s not only wrong but illegal?  Well, who cares, right?

Card’s statement suggests that the parts of the “corrective action plan” about doing more to keep families together are just b.s. to placate state officials.

This would be disturbing at any time.  It’s especially now, when all over America, what Donald Trump is doing to children at the border has professionals speaking out about the catastrophic effects of tearing apart families.

Yes, the motives are different.  I think Chris Card has the best of intentions.  But that’s not good enough – because regardless of the motive, the effects on the children are the same.

If anything, the Tampa Bay Times is worse.  In an editorial, the Times, as usual, resurrected the Big Lie of American child welfare, suggesting that family preservation and child safety are at odds and that, if not for the Times’ eternal vigilance the Vast Family Preservation Conspiracy will rise up and leave children in danger.  Or, as the editorial put it:

While Hillsborough may have tilted too far in some cases toward removing children from their parents, it will be equally important not to over-correct and leave children in dangerous situations in the name of keeping families together at virtually any cost. 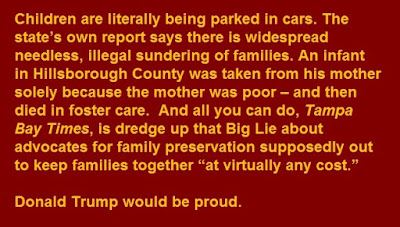 So, let’s review. Children are literally being parked in cars. The state’s own report says there is widespread needless illegal sundering of families. An infant in Hillsborough County was taken from his mother solely because the mother was poor – and then died in foster care.  And all you can do, Tampa Bay Times, is dredge up that Big Lie about advocates for family preservation supposedly out to keep families together “at virtually any cost.”

Donald Trump would be proud.

In fact, family preservation isn’t just more humane than foster care. For the overwhelming majority of children it’s also safer than foster care. And the more you overload your system with children who don’t need to be there, the less time workers have to find children in real danger.

So here is the one-point “corrective action plan” I wish someone would impose on Chris Card and the Tampa Bay Times editorial board:

Make them sit in a room and listen to the audio of desperate children crying for their mothers and fathers at a detention center on the border. Then make him listen again.  And again.  And again.  Until, finally, it sinks in that the children needlessly and illegally torn from their families in Hillsborough County, Florida, every day, shed the same sorts of tears for the same sorts of reasons.  And finally it sinks in that their casual dismissal of the problem of needless removal is adding to the terrible harm already done to the vulnerable children of Hillsborough County.
Posted by National Coalition for Child Protection Reform at 11:00 PM