Demonized in absentia: What The Nation got wrong about child welfare and opioids

UPDATE, JULY 26, 2018: Further evidence that the solution to the problems of journalism is more journalism: Everything that was left out of the story discussed below is included in this excellent story, also from The Nation.


There is a lot that is good in The Nation’s cover story “Lessons from the Opioid Epidemic: How public schools have become the safety net of last resort for traumatized children.”  The story, by Associate Washington Editor Zoë Carpenter, makes clear that the “root causes” of everything that has gone wrong are poverty and unemployment.  The story decries, albeit briefly, the lack of drug treatment.  The story even acknowledges some of the failings of previous journalism on similar issues.

But, in many ways, a publication that ought to know better has perpetuated stigma and stereotype,
and contributed to the dominant false narrative in American child welfare: that increases in foster care are inevitable because of opioids.

The story describes the effects of opioid abuse on children in one of the states where the problem is worst: West Virginia.  In particular, as the subtitle suggests, it focuses on the daily work of teachers in poor rural communities who try to help children affected by parental drug use.

The story makes the now-obligatory nod to the excesses of “crack baby” coverage in the 1980s and how that stigmatized both the children and their parents. But while the story goes to great lengths to avoid similarly stigmatizing children, it does almost nothing to counteract similar demonization of their parents.

The parents are silenced

That’s because the voices of those parents are silenced.  In more than 5,000 words, we hear from children, from teachers, from counselors, from grandparents stepping in to provide kinship foster care, from law enforcement from emergency room doctors and on and on.  Not one of those 5,000+ words comes from a parent. That leaves everyone else to paint a picture of them. So they are demonized in absentia. 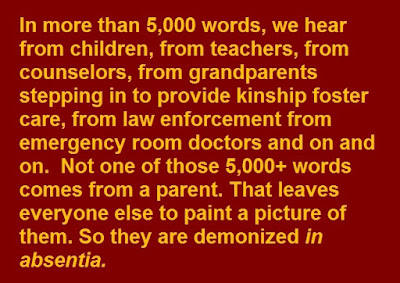 ● The story is filled with anecdotes about the trauma inflicted on children by their parents’ drug use. The anecdotes are not hype. There are times when drug use inflicts exactly this kind of trauma on a child. But while the story does not overtly condemn the parents for it, it is still implied that all children whose parents use drugs inherently suffer this kind of trauma.  And that is not true.

● That false impression is reinforced by that total absence of  parents’ voices.  There are no voices from parents such as this one. We don’t even hear from former foster children such as the young woman, now a social worker herself, who wrote in Teen Vogue about how she never should have been taken from her parents; parents who were heroin addicts.  These perspectives contrast sharply with the “master narrative” of most coverage of child welfare and substance abuse, a narrative largely accepted in The Nation’s story.

So a grandmother raising her grandchildren says “We do our best to give them the best. But no matter what we give them, we can’t give them what a mom and dad who truly loved them could have given them.”

Do these children’s mom and dad not love them? We don’t know. We never hear from them.  But that kind of characterization certainly fits the dominant media stereotype of parents who “choose drugs over their children” (which, if one believes addiction is a disease, is like saying parents “choose cancer over their children).

And, indeed, according to the story, “Several [teachers] spoke resentfully about adults who, they felt, chose drugs over their kids’ well-being.” The closest thing to a dissent was from a teacher, whose own son has a serious drug problem, who said: “after a while, it’s not a choice,” [emphasis added].

Even the section decrying the lack of treatment options implies that few of these parents would take advantage of treatment anyway.  The story quotes an ER doctor who says: “It’s really sad.  We get a few that actually, legitimately want help …” [emphasis added].

● The trauma anecdotes are reinforced by a long, detailed discussion of Adverse Childhood Experiences – the various traumas that can scar a child for life.  There is much about the trauma inflicted by lives of uncertainly for children still living with their own parents.  There is much about how even seemingly small traumas can have big consequences. But one of the biggest traumas of all, the trauma of being removed from parents, is viewed as harmful – but inevitable.

So, citing a local television news story as documentation, The Nation tells us:

There are 6,300 children in the foster-care system in West Virginia; nearly half were separated from their parents because of substance misuse.

● The figure really means only that for about 3,150 children a caseworker checked a box on a form alleging substance misuse – often the easiest way to get a judge to rubber-stamp removal.

● Substance misuse can mean anything from parents overdosing in front of their children to a mother smoking marijuana to ease the pain of labor.  And, in the case of opioids, children often are taken from parents using medication, such as methadone or buprenorphine that is prescribed as part of their treatment plan.

● Most important, The Nation is accepting the conventional wisdom that the only answer to substance misuse by a parent is taking away the child.  There is no mention of states, such as Connecticut, where the child welfare agency does not view removal as inevitable, and is pioneering better alternatives.

So The Nation focuses on the need for help to ease the trauma of separation after the fact, instead of questioning why all this separation is happening in the first place.  The story leaves the impression that if we just send in enough therapists the wounds inflicted on the children by the separation from their parents will all be healed. Surely what’s happening at the Mexican border should have debunked that myth once and for all. 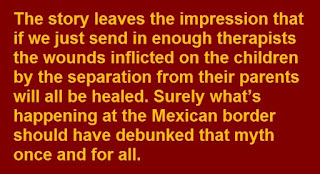 ● Similarly, the story is filled with references to children in foster care because a parent is in jail.  Yet   (The only reference to the possible misuse of incarceration is a throwaway line suggesting, correctly, that this is a problem in predominantly African-American inner-city neighborhoods. The possibility that it also could be a problem for poor whites in rural West Virginia goes unexplored.)
the story never asks if these parents should be in jail.

In short, there’s almost nothing wrong with what’s in the story – the problem is all that is left out.

So the story concludes that, in the community at its heart, “they need access to doctors and treatment centers, to jobs that don’t leave them with broken bodies. They need funding for teachers, for classroom supplies, for counselors.”

The Nation could have learned a lot from the far better reporting done by a small newspaper in Montana, The Missoulian, and a team of remarkably talented journalism students.  For one thing, they decided that parents with substance use problems actually were worth talking to.

The Nation story notes the common claim that this drug plague is being treated with more sympathy because it has a whiter face.  But while that may be true in some quarters, there is little evidence to support that claim in child welfare.  On the contrary, child welfare systems are jerking their knees in response to opioids the same way they did in response to crack – by rushing to tear apart families.

And The Nation doesn't seem to have a problem with this.
Posted by National Coalition for Child Protection Reform at 11:00 PM