One element of NYC foster care panic eases; everything else still stinks


New report finds the worst form of child removal is still increasing far faster than the rate of investigations; caseworkers and courts are dangerously overloaded


New York City’s Administration for Children’s Services remains an agency in foster-care panic mode, with no sign that the current commissioner, David Hansell, has any interest in doing anything about it.

One element of the panic has slowed – but not stopped. In other respects, things are as bad as they’ve been since the panic began more than a year-and-a-half-ago.  They remain as bad as they were when The New York Times found that New York City foster care had become the new “Jane Crow.”

The panic has done nothing to make children safer. Key measures of child safety improved before the panic, as entries into foster care declined, and one of them got worse afterwards.

The fact that the panic, and the harm to children, continues is made clear once again by an impressive new analysis released yesterday by the Center for New York City Affairs at The New School. It's called Child Welfare Surge Continues.

What the new report found

The report looks at data for the 20 months since the tragic child abuse death of Zymere Perkins set off the most recent New York City foster-care panic in October, 2016 and compares the data to the 20 months before the panic began.

● Investigations of reports alleging child abuse or neglect increased 11 percent, as more people were encouraged to report anything and everything, no matter how absurd.

More people calling in reports is the standard excuse for foster-care panics. Agencies say, in effect: Well, of course we’re taking away more children, we’re investigating more reports!  In fact, during a foster-care panic a far greater percentage of reports is likely to be false, so there should be no such assumption.  But in any event… 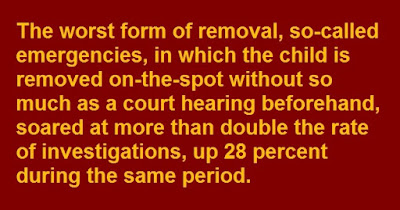 ●… the worst form of removal, so-called emergencies, in which the child is removed on-the-spot without so much as a court hearing beforehand, soared at more than double the rate of investigations, up 28 percent during the same period.  And, as the report notes, ACS doesn’t even report all such removals.

As the Center for New York City Affairs report explains:

Lawyers who represent parents in Family Court say that ACS seems, more frequently, to be making emergency removals that aren’t justified by a child’s circumstances. “Those are the removals that are the most traumatic for children,” says Emma Ketteringham, the managing director of the Family Defense Project at The Bronx Defenders. “They’re often done in the middle of the night, without preparation. You find out five minutes before that your child is going to be removed.”

The rise in emergency removals, Ketteringham argues, is the clearest indication that an over-reactive child welfare system can hurt children—especially in the context of the current conversation about children separated from their parents at the U.S.-Mexico border.

“With all of this attention being paid, nationally, to what removing a child from a parent actually looks and sounds like, it’s no different when a child is removed from a parent here in the Bronx,” she says.

● Even when a child is not removed, forcing the family into court and then forcing that family to endure onerous supervision also takes an enormous, needless toll on the children. Such cases have skyrocketed by 54 percent. Again from the report:

“At this point everybody’s so afraid, they’d rather cover their ass,” the caseworker said. “Take the case to court and let the judge say no. Then we can document we tried. Nobody wants to end up with their face in the Daily News. They don’t want to face criminal charges.”

Once ACS decides to file a case, however, it’s unlikely that a judge will dismiss it outright, says [Ronald] Richter, the former ACS commissioner and Family Court judge. “Judges may yell and get frustrated with ACS” for filing a petition without a strong enough cause of action, Richter says. “But they’re anxious: Maybe there’s something here.”

What does that mean in real life? Consider this New York City case, involving an African-American mother expecting twins. Her extreme morning sickness was so severe she couldn’t keep food down. Her doctor said she had to eat more for the sake of the babies. The only thing that helped was marijuana. So she dared to think she could behave like a middle-class white woman and smoke pot. Read her op-ed in the Daily News to see what “merely” being under supervision did to her family.

All of this, of course, also overloads the system. Worker caseloads are now dangerously high, especially in the Bronx and Staten Island – increasing the chances that the next Zymere Perkins will be missed.  And court backlogs delay the provision of help to families and potentially delay reunification.

There is exactly one piece of good news: The rate at which children are torn from their parents in New York City apparently has slowed in the most recent six months for which data are available, the period ending in May, 2018.  This suggests that what usually happens during foster care panics is happening now: Everyone is calming down and returning to something closer to business-as-usual.

This can be seen by comparing entries into foster care for the full 20 month period covered in the new report to shorter time periods used in the Mayor’s Management Report.

During New York City Fiscal Year 2017, which includes the first nine months of the foster-care panic, the number of children torn from their families increased 13 percent over FY 2016. During that same time period, investigations increased by only about seven percent.  Similarly, during the first four months of FY 2018, investigations were up 6.1 percent over the same period the year before, but removals increased 16 percent.

But then, as the month-to-month graphs in the Center for New York City Affairs report make clear, removals started to fall back to their pre-panic levels.  That explains why, when comparing the full 20 month period since Zymere Perkins died to the 20 months before, the new report finds that the increase in entries is 3.8 percent – which, the report points out still “represents a reversal of the longstanding trend” toward reducing entries into foster care.

No doubt David Hansell will rush to claim credit for this, since, as we’ve seen before, if there’s one thing at which he is particularly skilled it is claiming credit for things that have nothing to do with his own tenure in the job.

A real leader would have stopped the foster-care panic in its tracks, or at least drastically curbed it, as soon as he took office, which in Hansell’s case is well over a year ago. Instead, the overall panic finally is slowing of its own accord, while so much else in New York City child welfare continues to get worse under his leadership.

Posted by National Coalition for Child Protection Reform at 8:48 AM