More than just a dissent in an individual case, this opinion is a call to transform “child welfare” in Michigan – and everywhere else.

The Chief Justice of the Michigan Supreme Court, Bridget McCormack, has written a dissent in a case involving termination of a child’s rights to her parents (a more accurate term than termination of parental rights).  Justice McCormack is retiring, and what may be her final opinion in a family policing case goes well beyond any one case.  It is a brilliant dissection of the failings of both law and practice in “child welfare” in Michigan and pretty much everywhere else in America.

As far as the case itself goes, the best thing Michigan’s family police could have done was offer some strictly voluntary help to the mother and go away.  The second best thing they could have done was -- nothing at all.  The case began in 2017 with the child at its center living with friends of the mother, while the mother coped with traumas in her own life.  Five years later, the child remains there.  But with two differences:

First, thanks to the interference of the family police, the child, the mother and the friends all were put through a wringer.  The adults had to endure jumping through one meaningless hoop after another and the child endured the torment of years of court proceedings and uncertainty.

Second, the child no longer has any legal right to see her mother, with whom she has remained very close.  If there’s ever a falling out with the friends, who were forced to become licensed foster parents, or if the family police simply so decree, all contact between mother and child can be cut off.

As Justice McCormack wrote in her dissent:

How would this case have turned out if, rather than admonishing the respondent-mother for failing to secure a legal guardianship (a process that’s confusing and not common knowledge to every new parent who might call on friends and family to help), the court had simply helped her set one up? …

both tragic and frustratingly commonplace. A mom expressed a strong interest to remain a part of her daughter’s life. Her daughter expressed a similarly strong interest to see her mom. And yet the best our legal system has to offer them is a complete severing of their legal relationship, with no consideration of creative solutions that would benefit the whole family. I wish this case was an outlier. But in ten years reviewing records in termination cases, I have seen many just like this where our statutory process for protecting children has failed them.

McCormack didn’t stop there.  She went on to critique every stage of the process.

This particular case was unusual in that the child already was living with the family friends.  Most cases begin with what McCormack rightly characterized as “the forcible removal of the child from the home.” She then raised an issue that’s been a theme of this Blog since it began 16 years ago: balance of harms. She writes:

The harms of removal and sometimes also foster care can produce “worse long-term outcomes than if the child had remained at home” in many cases … But Michigan’s removal statutes do not require courts to balance these harms against the harm that might result from staying home. 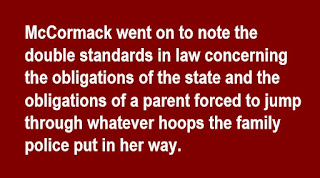 In this case, she wrote,

From the point of court involvement to the final hearing, the respondent-mother made immense progress toward the goals laid out by [the Michigan Department of Health and Human Services] in her agency treatment plan. She found housing, got a job, took classes, left a toxic relationship, found a therapist, and began taking her medication. But because she had not convinced the court that she was stable enough in these accomplishments on the day of the termination hearing, she lost the chance to continue improving. …

Raising a child is difficult, even when there is no crisis. The statutes governing termination proceedings require only “reasonable” efforts—not perfect efforts—from DHHS to reunify the family. And yet, we often require parents to meet each requirement with near perfection. Should any obligation in a court’s order not be completed, a parent can lose their legal rights to their child.

In the respondent-mother’s case, the trial court terminated her parental rights for two reasons: her ongoing efforts to manage her mental health and a decision to drive to court with a suspended license. The substantial progress the respondent-mother had made toward rectifying the conditions that led to court involvement in her family didn’t matter.  And whether external factors, like poverty, contributed to her decision to drive to court without a valid license was not relevant either. The court seemed to want a perfect parent, not a reasonable parent.

McCormack also explained that Michigan law allows termination when “the conditions that led to adjudication continue to exist.”  But in some cases, correcting such conditions is, literally, impossible.

In this case, McCormack writes, the court that terminated the child’s rights to her mother

I would only add a question: Does that latter standard mean that the Michigan family police will start investigating every family in Bloomfield Hills with a live-in nanny?

McCormack dissects how the broad, vague concept of “best interests of the child” is easily subject to the whims and biases of agencies and courts.

This isn’t a new observation, which makes it all the more frustrating. In 1977, then [U.S. Supreme Court] Justice Brennan noted that the “best interests” standard’s open-ended nature allowed “social workers of middle-class backgrounds, perhaps unconsciously, . . . to favor continued placement in foster care with a generally higher-status family” because of a “bias that treats the natural parents’ poverty and lifestyle as prejudicial to the best interests of the child.”

McCormack goes on to point out solutions, some of which may require statutory changes, but most of which do not, starting with not confusing poverty with neglect.  And she concludes with a warning, that’s also been a theme of this blog:

There are, of course, cases of neglect or abuse where children should not remain with their parents. But when a child welfare system spends too much time investigating, monitoring, and adjudicating families that do not require court intervention, these serious cases can slip through the cracks.

So now consider again the five years spent traumatizing this child and harassing both her mother and the friends who had taken the child in.  What case slipped through the cracks in the meantime?

Posted by National Coalition for Child Protection Reform at 3:53 AM