“[Like being] stopped and frisked for 60 days”: NYC family policing traumatizes kids, confuses poverty with neglect and is racially biased. Who says so? Some of their own caseworkers.

It’s all in a report commissioned by the Administration for Children’s Services itself. Among the recommendations: “Transparently share information and data around decision-making.”  ACS’ response: Don’t release the report!


This is the second of three parts about a scathing report, commissioned by the New York City family policing agency itself, that found pervasive racial and class bias in the agency, and rampant confusion of poverty with “neglect.”

● Yesterday: Context for the new study: The Administration for Children’s Services’ own data show that when the agency pulled back, did fewer investigations and took fewer children – child safety improved.

● Today: ACS commissioned a study of racism in the agency.  Then they suppressed it.  Family defenders had to use the state Freedom of Information Act to get hold of it.  Once you read it,  you’ll see why ACS wanted to hide it.

● Tomorrow: The New York Times published a front-page story about the study that was, mostly, very good.  But it still fell into some of the traps that characterize much of the journalism of child welfare – including a crucial misunderstanding of poverty and neglect and one inflammatory claim that, as originally published, was flat wrong.

● And always: New York City has one of the least awful family policing systems in America. As you read about what the caseworkers themselves are saying there, remember: Wherever you are, it’s probably worse.

The front page story in The New York Times begins this way:

For decades, Black families have complained that the city’s child welfare agency, the Administration for Children’s Services, is biased against them.

It turns out that many of the agency’s own employees agree, according to a racial equity audit the agency commissioned but never publicly released.

It’s a very good story, a huge improvement over much recent Times coverage. It also has some notable flaws, – including one inflammatory claim that, as originally published, was flat wrong.  I’ll discuss all of this in a post tomorrow.  For now, let’s take a close look at the report itself, especially since it’s a report ACS didn’t want you to see.

The report, from the National Innovation Service, was commissioned in 2020, during the tenure of former ACS Commissioner David Hansell.  But Hansell’s biggest concern always was protecting his own image – and that of then-Mayor Bill de Blasio.  So, notwithstanding that the report’s recommendations include “Transparently share information and data around decision-making” Hansell never released it.

But he did mention it at a City Council meeting.  One of the city’s providers of high-quality family defense, The Bronx Defenders sought it under New York’s Freedom of Information Act  -- and they got it during the administration of a new ACS Commissioner, Jess Dannhauser.

What’s in the report

It’s easy to see why Hansell was so embarrassed.

The report includes interviews with parents, family defenders, and more than 50 ACS employees from frontline caseworkers to top staff.  Among the findings: 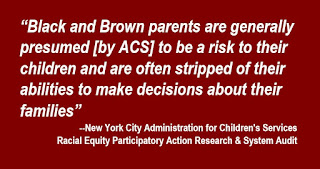 Participants described a system where race operates as an indicator of risk. … [W]hite parents are presumed to be innocent and are repeatedly given opportunities to fail and try again, while Black and Brown parents are treated at every juncture as if they are not competent parents capable of providing acceptable care to their children. … Black and Brown parents are generally presumed to be a risk to their children and are often stripped of their abilities to make decisions about their families.

The report also includes a crucial finding about poverty and neglect – one that, as I will discuss tomorrow, the Times misunderstood:

The way that ACS views safety is clearly linked to class. Participants described how poverty is criminalized, as signs of poverty are often seen as indicators of neglect. Parents felt penalized for being poor, as investigatory processes sought to catalog the ways in which parents struggled to provide food, housing, and resources for their children, and frame it as neglect. …

Parents and advocates especially emphasized homelessness and unstable housing, limited money to purchase food, and lack of access to stable medical care as crucial areas where parents needed to be supported rather than have their children taken away for neglect.

Something else the report understood, but the Times story underplayed, is the harm all this does to children. 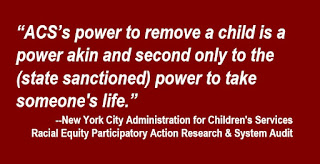 ACS’s power to remove a child is a power akin and second only to the (state sanctioned) power to take someone's life. The experience of an investigation, even when an allegation is ultimately determined to be unfounded, too often traumatizes parents and children. One staff member described it as the experience of being stopped and frisked for sixty days, and participants shared countless stories of reports filed on Black and Brown parents that were grounded in unfounded claims of neglect or risk of neglect. [Emphasis in original].

But staff also know something else: They know exactly how this mentality makes all children less safe.  According to the report: 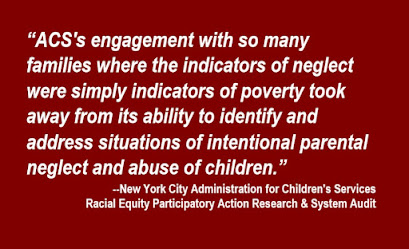 ACS staff frequently encounter cases where mandated reporters file reports that describe conditions indicating poverty but not neglect. The lionshare of examples that staff discussed were from the Department of Education, where DOE staff frequently file reports based on the cleanliness of a child's clothing or whether they bring food to school … ACS's engagement with so many families where the indicators of neglect were simply indicators of poverty took away from its ability to identify and address situations of intentional parental neglect and abuse of children. [Emphasis added.]

This is confirmed by the new data discussed in yesterday’s post, showing that when, because of COVID, teachers and other school personnel weren’t deluging ACS investigators with false reports trivial cases and poverty cases, child safety improved.

In the report, staff also acknowledged the role of what’s been called “defensive social work.” They know the complaint that workers are “damned if we do and damned if we don’t” isn’t true. They know that when it comes to taking away children, they’re only damned if they don’t.  From the report:

Fundamentally, internal and external pressures drive staff to seek removal as a first course of action, to cover the reputation of staff, internally, and ACS, externally. …

Staff described an internal culture that operates on fear and intimidation, where staff can easily find themselves in front of a firing squad being interrogated about their work on a case or reprimanded for not meeting their target metrics. … This frequently means that staff err on the side of safety for themselves, by seeking removal and thereby ensuring that they won't be liable in the case of abuse. … Staff frequently stated that this culture of fear incentivized the removal of children, positioning CPS staff as detectives looking for reasons to remove children, rather than as social workers aiming to support families. 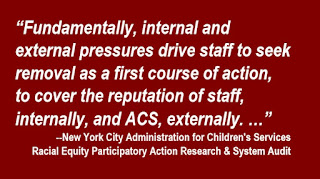 The report also addresses a common misconception about institutional racism: that if there are a lot of nonwhite employees, the institution can’t be racist.  A majority of ACS frontline caseworkers are nonwhite.  However, the report explains:

Frontline staff and lower-level managers in [the ACS Division of Child Protection] identified a clear racial hierarchy within ACS, which means that Black and Brown staff don't have the power to inform policies and practices and voice their experiences of racism. … The central office was described as predominantly white, where staff rarely had direct service experience and often were hired from graduate school or adjacent social service systems. In contrast, borough offices were depicted as having majority Black and Brown staff who often reside in the communities they serve and were led by leaders with direct service experience at ACS. DCP staff described a dynamic where predominantly white leaders in the central office make policy for Black staff to carry out in the borough offices.

Staff ... pointed to many policies and practices that they know to be harmful to parents, but are still responsible to enforce and uphold. For this reason, staff feel complicit in the harm that ACS can cause Black and Brown families and no power within the agency to make changes that might benefit them. …

Also revealing: Widespread support among workers themselves for legislation that would require them to give the equivalent of a Miranda warning, fully informing families of their rights.  They also support extending New York’s system of high-quality legal representation to a point “at or before their first interaction with ACS.”

ACS has opposed both these ideas.  On the rare occasions ACS reaches into a white, middle-class home, parents can afford to get a lawyer immediately and that lawyer can tell them their rights. Poor Black families don’t have that option. According to the report:

Parents and advocates see ACS's active resistance to both Miranda rights bills and … early legal representation … as a clear sign of its racism.

Read all three parts of this series here.

Posted by National Coalition for Child Protection Reform at 3:00 AM