Not a lot of stories this week, but two of them are blockbusters:

● In all the time I’ve followed child welfare – more than 45 years now – I’ve probably read hundreds of stories about foster children trapped in all sorts of hideous makeshift placements.  But here’s what sets last week’s stories in The Philadelphia Inquirer apart.  They got the solutions right.  One of the stories summed it up this way:

Advocates say what’s needed now is to address the short-term glitches while pursuing the long-term vision of supporting more families at home — not backsliding into the era when congregate beds were ample and eagerly filled by a system that saw removing and institutionalizing kids as an easy fix. [Emphasis added].

That summary is in what reporter Samantha Melamed herself called the “TL;DR version.”  But I hope you’ll resist the temptation and read the full story.

● NCCPR has an op-ed in the Inquirer with more on how to fix the crisis.

● The Inquirer’s own editorial about this is all over the map.  But its conclusion suggests that, in mainstream media, Prof. Dorothy Roberts has opened the “Overton Window”:

Dorothy E. Roberts, a scholar on race and gender at the University of Pennsylvania Carey Law School, has called for dismantling America’s child welfare system, arguing that it largely punishes Black families for being poor. Studies show Black children continue to be taken from their mothers at a higher rate than white children in similar circumstances.

Roberts’ suggestion may seem extreme, but it’s understandable. Something must give when children are dying, being abused, and sleeping in government office buildings because there is no other place for them. Additional disruptions caused by the pandemic have exposed a child welfare system that too often does more harm than good. It is in desperate need of repair, and there’s no time to waste. [Emphasis added.]

● Think you know everything about the Trump Administration’s ghastly exercise in calculated cruelty when thousands of children were torn from their families at the Mexican border?  Trust me, you don’t.  In a masterpiece of investigative journalism for The Atlantic, the result of an 18-month investigation, Caitlin Dickerson reveals that it was worse than we ever could have imagined.  I have a blog post on whether this story will help more Americans make the connection.  (It’s the connection Joyce McMillan of JMac for Families makes here: 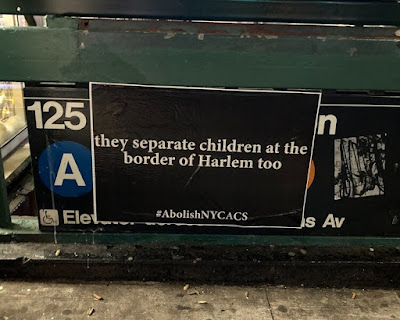 ● Alan Detlaff, dean of the Graduate College of Social Work at the University of Houston and co-founder of upEND, makes the connection on the Community Legal Services of Philadelphia How Is That Legal? Podcast.  He also tells a story about his own days as a “child protective services” investigator.  When his agency investigated cases jointly with the police, the cops would ask him to go in and question the parents first.  Why? Because police have to inform parents of their rights; but the family police don’t.

● And speaking of Joyce McMillan, check out video of her testimony in Geneva before the United Nations Committee on the Elimination of Racial Discrimination.

Posted by National Coalition for Child Protection Reform at 3:29 AM