On this Saturday - “National Adoption Day” - who will stop to remember that for some children and some young adults every mass adoption ceremony, every treacly feature story on the local news is an act of cruelty – ripping the scab off a wound that never fully heals?

There was a time when, as a people, we were so uncivilized that executions were a form of entertainment – a public spectacle to be celebrated.

In Canada, for example,

Before they were banned in 1870, executions in public places could draw thousands of spectators, including families and young children. Boisterous behavior and a less-than-solemn attitude marked these macabre gatherings.  “When the day of a public execution arrived, the businessmen closed their factories and their stores and the people put on their holiday dresses,” noted an 1894 article in the Evening Star about hangings in early Toronto.

The last official state-sanctioned public hanging in the United States drew a crowd of 20,000.  Even then, reporters condemned it as a “carnival.” (I probably don’t even need to mention that the man they hanged was Black.)

Fortunately, nearly a century later, we have, of course, outgrown such practices.

Except in "child welfare."

Termination of parental rights (or, as it should be called, termination of children’s rights to their parents) often is described as child welfare’s death penalty.  It is the prerequisite to any adoption of a child from foster care.

And every year, all over America, we celebrate these family executions with a joyous public spectacle.  It’s called National Adoption Day.  This year it’s happening on Nov. 20.

You know the drill. Open the court on a Saturday, bring in ice cream, cake and balloons, finalize foster-child adoptions en masse – and reinforce every stereotype about how the system supposedly “rescues” children from horrible birth parents and places them with vastly superior adoptive parents.  The same judges who are supposed to decide impartially on termination cases often lead these celebrations.

Of course, because of COVID, in many places Adoption Day has gone virtual.  But don’t worry, organizers of the Los Angeles County event have added a particularly macabre 21st Century touch:  “A pool camera will be permitted at a pre-selected adoptive family’s home for coverage as the family’s virtual adoption ceremony takes place.”

The whole spectacle also gets the courts and the local family policing agency (a more accurate term than “child welfare agency”) a guaranteed puff piece in the local newspaper celebrating what is, in reality, the aftermath of an execution.  And, of course, as with those other public executions, a disproportionate share of the families “executed” are Black. 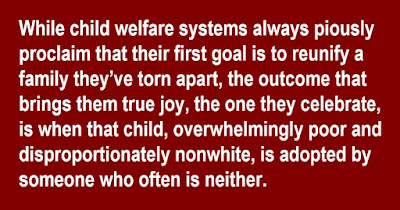 I’ve previously written that this day should be called National Child Welfare Hypocrisy Day – since while child welfare systems always piously proclaim that their first goal is to reunify a family they’ve torn apart, the outcome that brings them true joy, the one they celebrate, is when that child, overwhelmingly poor and disproportionately nonwhite, is adopted by someone who often is neither.

So in that sense, my previous column was too kind.  It said adoption was sometimes an appropriate second choice after reunification and sometimes the appropriate first choice.  In fact, adoption should be farther down on the list, after not only reunification but also guardianship and perhaps other options as well, such as tribal customary adoption, a practice used by some Native American tribes that might well be adaptable elsewhere.  And while a private celebration is one thing, it should never be a mass public spectacle – it rubs salt into too many open wounds, and not just for parents.

Prof. Christopher Church, senior director of strategic consulting at Casey Family Programs, has argued that using the term “civil death penalty” to describe the terminations that come before the cake, ice cream and balloons actually understates the trauma to the child.  Horrible as it is to lose a parent to physical death, losing a parent to termination of parental rights can be worse.

“When a child knows somebody is out there but they have no way of connecting to them, that is ‘ambiguous loss,’” Church said at a recent conference.  “That is a more complex trauma for children than death loss.  … Death is finality and [children] can comprehend that better.”

Church also reminds us that before the joyous public spectacle there’s sometimes another ceremony, if you can call it that.  It’s called the “goodbye visit.”  Children are told they will never, ever see their parents again, and now they all must say goodbye.  No cake and balloons here; just tears and anguish. The children are not always saying goodbye just to their parents.  If one child is adopted and the others are not, the sibling bond is severed forever.  If a parent later has another child whom s/he is allowed to keep, the child who was adopted amid the ice cream and cake may never know that sibling – unless, when they are adults, they find some way to find each other.

But hey, don’t let that spoil the party.

I can imagine some readers thinking: But wait. We have to do this, don’t we?  After all, if a case goes to termination of parental rights, the parents must have been the worst of the worst, right?

Wrong. The termination phase is as arbitrary, capricious and cruel as every other decision-point in child welfare.  As Prof. Vivek Sankaran, director of the Child Advocacy Law Clinic and the Child Welfare Appellate Clinic at the University of Michigan, has written:

Still another indication of what’s really behind termination cases can be seen in how different the outcomes are by age.  Among children torn from their parents during their first year of life, only 36% are reunified; 46% are adopted.  Then, year after year, reunification rates inch up almost every year until age 14. Nearly 54% of children taken at age 14 were reunified.

So are parents of infants vastly worse than parents of 14-year-olds?  Or do caseworkers have their own rescue fantasies triggered by a child about whom they can gush, “Awwww, he’s so cute!”

No, we don’t need adoption and the attendant spectacle of mass public family execution to give children “permanence.”  In fact, we don’t know how often adoption does that.  Child welfare systems don’t like to ask questions to which they don’t want to know the answers, so we don’t know how often, when, say, that cute baby becomes a teenager, the adoptive parents change their minds.

But even when the adoption doesn’t fall apart, and even when a child really can’t live safely with her or his own parents, the obsession with adoption still hurts children.  As Prof. Sankaran explains:

Families, and the relationships within them, are far more enduring and resilient than we want to acknowledge. In our quest for legal permanence, we forget about a child’s need for relational permanence, often defined as a child’s lifelong connection with caring adults. For example, too often, we ratify adoptions with the hope of providing a child with a legally permanent home. But in doing so, we cut off the child’s ability to have permanent relationships with those who have – and will always – matter to him. A mother. A sibling. A grandparent. Hence the countless number of stories of adopted children searching for their kin.

Other options, such a guardianship, don’t require a child to sacrifice any relationships.

So this time, when National Adoption Day rolls around, remember that for some children and some young adults every mass adoption ceremony, every treacly feature story on the local news is an act of cruelty – ripping the scab off awound that never fully heals.

Again, that doesn’t mean adoption by strangers and termination of parental rights are always wrong.  But it needs to be moved much farther down on the list of options for children.  And while, on rare occasions, we still need to impose child welfare’s death penalty, can’t we at least have the decency to stop celebrating it?

Posted by National Coalition for Child Protection Reform at 1:56 AM