UPDATED: Another child welfare scholar with an agenda

The same scholar who claims predictive analytics in child welfare isn’t biased also signs on to an extremist agenda calling for an automatic, mandatory extra level of family police surveillance of thousands of impoverished families.  They are disproportionately nonwhite families who have not so much as been accused of abuse or neglect.

She also misunderstands abolition, mocks the words of a Black child welfare activist and doubled-down on the mockery after this post first was published.

Yet somehow, she’s been invited to speak on predictive analytics in New York City “child welfare” in November, but one of the foremost critics of that effort has not. [UPDATE, OCT. 30: After this post was published, she was added to the panel.]

Emily Putnam-Hornstein is probably America’s foremost proponent of using “predictive analytics” in child welfare – that is, mining vast quantities of data surrendered disproportionately by poor people and people of color and using it, without their informed consent, to determine if they are supposedly likely to be child abusers.

Putnam-Hornstein co-designed the Allegheny Family Screening Tool, which stamps a risk score on every “neglect” case screened by the county’s child protective hotline, and the even more Orwellian – in both name and substance – “Hello, Baby,” which seeks to stamp the same sort of invisible “scarlet number” on every child in the county – at birth.

Putnam-Hornstein says she is, in effect, just someone who just goes where the data lead.  She combines this with rhetoric about how her efforts are just ways to bolster prevention – and I think, in her own mind, she believes it.

But every once in awhile we see something else: an ugly, extremist agenda.

Earlier this year, Hornstein co-authored or “co-signed” (it’s described both ways on different pages), a paper with several of the most extreme proponents of tearing apart more families and/or denying that child welfare has a racism problem.

The group was pulled together by Naomi Schaefer Riley of the American Enterprise Institute, someone who proudly compares her book attacking family preservation to the work of Charles Murray. Riley was kicked off a blog run by the Chronicle of Higher Education after one of her columns was widely condemned as racist.  More about her here.

Other co-authors/co-signers include Elizabeth Bartholet, leader of child welfare’s “caucus of denial” – the group that says child welfare is magically immune from racial bias, Cassie Statuto Bevan, who co-authored the so-called Adoption and Safe Families Act – and maintains the law didn’t do enough to tear apart families, and Penn State Professor Sarah Font who, in a now-deleted tweet (thank you Wayback Machine) declares that an alleged failure to prioritize children’s health, safety or existing relationships is a “feature” of the Indian Child Welfare Act.  She neglects to mention that a feature of Indian child welfare before ICWA was, uh, genocide.

Of course, working with people who differ with you ideologically and finding common ground can be entirely reasonable.  I come at this from the political Left.  I’m glad to work with like-minded conservatives with whom I disagree on almost every issue except child welfare.  But Putnam-Hornstein authored/signed a document that is as extremist as you would expect from the authors.  It’s what they all agree on about child welfare itself that’s the problem.

…reauthorization appointments for public benefits provided to children who are not attending school and have not been recently seen by a medical professional could require (in-person) verification of the children’s well-being. [Parentheses in original.]

Putnam-Hornstein and her coauthors make clear exactly who they are targeting:

Children in poverty are estimated to experience maltreatment at a rate five times that of other children, and the overwhelming majority of impoverished children receive at least one public benefit.

Well, yes. If laws effectively define poverty itself as neglect, and they do, then of course more poor children will be “estimated to experience maltreatment.”

Although concerns that [child welfare services] already entails “state surveillance” of poor and minority families make such proposals controversial, there is historical precedent for requiring home visits as a condition of receiving public assistance.

Once again, well, yes. There also is historical precedent for things like “whites only” signs at lunch counters bus terminals and other public accommodations. That doesn’t make them a good idea.  And when it comes to “home visits as a condition of receiving public assistance” the first “precedent” I could think of was blatantly racist.

In short, the document Putnam-Hornstein authored/signed calls for requiring every impoverished family in America whose children have not been seen lately by a “mandated reporter” of child abuse to produce the children for a child abuse inspection in order to, say, quality for TANF benefits or SNAP benefits.  These child abuse inspections would be triggered by nothing except the fact that the family is poor.

The selling of the algorithms

All this is on top of the track record of Putnam-Hornstein and her allies when it comes to selling the predictive analytics model in Pittsburgh.

● There’s the so-called independent ethics review of the first Allegheny County algorithm –done by a faculty colleague who wrote papers with Putnam-Hornstein’s co-designer of that very algorithm.

● There was the county’s reassurance that the “Hello Baby” algorithm wouldn’t be biased because it doesn’t use databases that involve exclusively poor people.  (Unless, that is, you count juvenile justice system involvement and homelessness databases which are, de facto, limited almost exclusively to poor people.)

● There’s the claim that “Hello Baby” is purely voluntary – except that you’re in it unless you remember to take advantage of just one opportunity to opt out.

Then there’s the matter of how Putnam-Hornstein concluded one of her presentations promoting predictive analytics, dismissing the work of Black scholars and Black activists.

In her concluding slide, she writes: “We are not going to ‘abolish’ the child protection system. And calling people ‘mandatory supporters’ is not a policy change.” She then reprints something she’d apparently said previously: “…the best abolitionists can come up with is ‘expand your role as a helper’ and ‘what are you going to do today to build another conversation’. Seriously?” 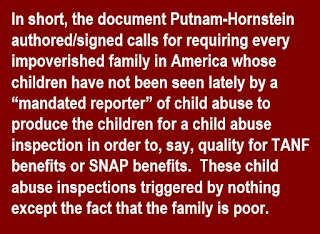 No, calling people mandatory supporters is not a policy change.  But abolishing mandatory reporting, a demonstrably failed approach that endangers children, and providing the tools to allow teachers, doctors and others who now have to call the family police to instead give families actual help – i.e. support – is a policy change – and a damn smart one, well-summarized by one the field’s best activists, Joyce McMillan. She first coined the phrase “turn mandated reporters into mandated supporters.”

That’s what the phrase means. I’m surprised Putnam-Hornstein, who holds a named professorship at the University of North Carolina-Chapel Hill, didn’t seem to know it.

UPDATE, NOV. 6, 2021: In an email shortly after this post was published Putnam-Hornstein doubled down on her statement, writing:

I definitely don’t feel badly for finding “mandatory supporters” a totally laughable concept and language. Frankly, I would have thought you would also get why that is absurd and would be a bit more intellectually honest about that. That is not how the system is designed.

No, it's not how the system is designed, Prof. Putnam-Hornstein.  That's why there's an abolition movement.

As for abolition, it’s a new concept, and different people who use the term may mean different things by it.  But you don’t have to agree with all of it or any of it to know that there is already a wealth of information about specific abolitionist alternatives – and even a real world example -  that goes well beyond the demeaning summary Putnam-Hornstein offered.

Nor should abolitionists be required to have immediately at-the-ready a some kind of 75-point master plan for exactly how to get rid of the current family policing system in order to be treated with respect instead of ridiculed.

There also are abolitionist critiques specific to predictive analytics.  While J. Khadijah Abdurahman’s critique was just published, Prof. Dorothy Roberts’ critique was published well before Putnam-Hornstein offered up her demeaning caricature of the abolitionist perspective.

And yet, somehow, next month when two academic institutions stage an online “examination” of predictive analytics in child welfare, with a special focus on New York City, Putnam-Hornstein will be there to give another sales pitch.  (After all, she’s a member of the city family policing agency’s "Predictive Analytics Advisory Group.”) And though some excellent critics from the American Civil Liberties Union are included, Abdurahman, whose critique is centered on New York City, is not.  [UPDATE: She is now!]

One more thing about the whole abolition debate: All of the alternatives proposed by abolitionists beat stamping a “scarlet number” risk score on every child at birth and forcing poor families to produce their children for inspection before receiving public benefits.

Posted by National Coalition for Child Protection Reform at 1:17 PM