UPDATED: “We move in silence”: Stories illustrate the constant threat to families from the child welfare surveillance state -- and how traumatizing children can be dismissed as just “an oopsy daisy.” 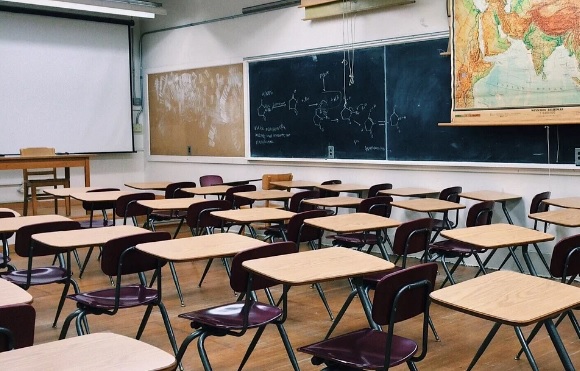 As schools start again, NPR is broadcasting a series of stories about how families are coping.  In one excellent story, Morning Edition anchor Rachel Martin interviewed a Black single mother struggling to hold down a job while her children learn online.

“I have four children,” the mother told Martin.

“Three boys and one daughter ranging from 13 - he's my oldest boy, you know, he likes to stay to himself, and he loves to draw, though; 11 - that's my sweetheart, my special little guy (laughter); 9 - that's my athlete, that's my busybody; and 7 - my daughter, that's my cheerleader.

What emerges is a story of quiet heroism, as this mother, always poor and sometimes desperately so, moves heaven and earth for her children.  She’s also taking college courses online to earn a bachelor’s degree.  NPR wisely left in interruptions to the interview as the mother stopped to talk to one child’s dentist and help another get online; they were glimpses into how much this mother has to juggle.

You can hear the story here:

NPR did not use the names of the children – but they did use the full name of the mother and the city where the family lives.

I wish they hadn’t.  Because the only thing standing between this family and the trauma of needless foster care for the children is random chance.  For six hours, while mom is working, the 13-year-old has to supervise the other three, including making sure they’re online for their classes.  The wrong caseworker could see that as “lack of supervision” or “educational neglect” or both. 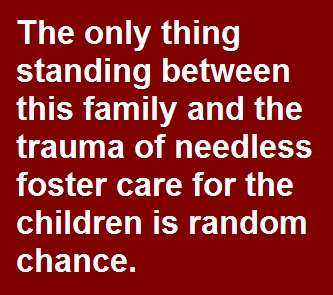 If someone, whether well-meaning or self-righteous or some combination, heeds the constant demands to report anything and everything to child abuse hotlines -- Go ahead and call!  Leave it to we professionals to decide!  You could be a hero! – and the wrong caseworker shows up, the children could be torn from their mother and consigned to the chaos of foster care.

It’s clear from this excerpt from the interview that the mother knows the risk. She almost seemed to be speaking to child protective services:

MARTIN: So there's a lot going on in your life and in your family's life. How does the school, the education part of it, complicate things, the fact that you don't have a safe place for kids to be during the day?

[MOTHER]: Well, where we are is safe. It's just I don't have - like I say, my son is old enough to keep the kids, but it's not his total responsibility to make sure that everybody is doing what they're supposed to do. Now, I do have access, you know, to the phones, you know, so while I'm at work, I definitely call and do my check-ins. And at this point, you know, for me, that's the best that I can do, you know, because I don't look for handouts. I don't need no pity parties. I don't want nobody to feel, you know, sorry for me because there's so many other women and families out here that's going through the same thing, you know, and we move in silence.

It could go the other way, of course. At least now the children can get online from home. They had to “borrow from the library to get internet access” until a local television station told their story and a donor stepped in.

Perhaps the national attention will prompt someone to help the mother get a job she can do from home, or hire a sitter – if one can be found given the current risks. (That, after all would be in the grand American tradition of absolving ourselves of responsibility for what we do to millions by helping the one we hear about on radio or TV.)  And perhaps the national attention will protect the family if someone is callous enough or naïve enough to call CPS on them.

If you think that’s farfetched, recall what’s happening in Massachusetts and New York City – or consider  What might be a strikingly similar case from California, as described  in this news account:

A Taco Bell proved critical for two little girls who were briefly using its Wi-Fi for school -- something that almost proved tragic after the kids were nearly taken from their mother.

A photo of two young girls sitting outside of a Taco Bell in Salinas, CA -- just outside of Monterey -- recently went viral ... which shows them plopped down on the concrete with their laptops and notepads out, while two TB employees come out to talk to them. … According to local community members who stepped in to help the family ... they were almost separated by cops and CPS officials, who apparently came knocking.

UPDATE: The original story has been updated with a statement from the police department saying they never had any contact with the family.  There is no word concerning CPS.

When CPS is at the door

We also got a rare detailed look last month at what happens when CPS does come to the door, and how much harm it can do, even when they don’t walk out with the children.  We got that look as a result of a court decision in Kentucky.  The decision comes in a lawsuit by a Kentucky family, represented by the Home School Legal Defense Association.

CPS agencies like to sell us on the idea that a child abuse investigation is no big deal – just a quick check if the family needs anything and, if there’s no problem, they go away. As the caseworker in the Kentucky case put it: “We’re just going to consider this an oopsy daisy.” Readers of this Lexington, (Kentucky) Herald-Leader story  might disagree.

The Herald-Leader reports that it began in 2017 when Holly Curry left her six children in her minivan for five to ten minutes to run into a coffee shop and get muffins.  It was a cool day, the doors were locked and the engine and fan were running.  Someone called police. The officer did not charge the mother. But he did notify child protective services – something he now says he regrets. 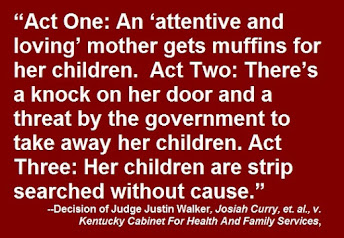 As the judge noted, when a Kentucky child abuse investigator, Jeanetta Childress and Hardin County sheriff’s Deputy Michael Furnish later showed up at the family home, “they knew the Curry children had been utterly unharmed while waiting in their climate-controlled car for the time it took Holly to run in a coffee shop.”

Nevertheless, they got Curry to let them into the home – by threatening to come back and take away the children if she didn't.  Then, as the Herald-Leader reports:

Writing in a court motion, Curry’s lawyers said that Childress “proceeded to strip search the children. Starting with the younger children, she pulled up their pant legs to look at their calves, then unbuttoned their pants, undid the buttons on their onesies, pulled them up to view their chests, stomachs and abdomen area, then undid their diapers and put her fingers down and looked inside.”

For the older children who wore underwear, Childress pulled it aside, looked inside and put her hands down their underwear, the lawyers wrote.

Childress herself claimed such stripsearching is standard operating procedure.  As the judge noted: "Incredibly, Childress repeatedly testified that she believed she should ‘automatically’ strip search any child who was four or under.”  And well, if nothing is found, after all, it’s just “an oopsy daisy.”

The judge saw it differently:

The judge wrote in his order last week that the social worker and deputy had no right to strip search the children in violation of their “fundamental dignity.”

“Here, Childress lacked even a shadow of probable cause that the Currys physically abused their children,” the judge wrote.

But, as the story notes, that didn’t stop Childress from allegedly issuing one last threat:

“If we ever get a call against your family again, bad things will happen to you and we’ll take your children,” according to the Currys’ attorneys.

The judge concluded his ruling this way:

“Act One: An ‘attentive and loving’ mother gets muffins for her children.  Act Two: There’s a knock on her door and a threat by the government to take away her children. Act Three: Her children are strip searched without cause.”

“America’s founding generation may never have imagined a Cabinet for Health and Family Services. But they knew their fair share of unwelcome constables. And they added a Fourth Amendment to our Constitution to protect against this three-act tragedy.”

But this drama has had a long, long run. And there’s no sign that the show is going to close anytime soon, unless we realize that, for the sake of millions of vulnerable children, it’s time to bring down the curtain.