UPDATE: A key CASA funder is “looking into” the Snohomish County CASA scandal


● The law firm that exposed the scandal filed complaints with the agency, and with National CASA.

● The Snohomish program is so lily-white it has to use a photo from National CASA to show a Black CASA volunteer. Several other CASA programs use the same photo.

Responding to a complaint from the law firm that exposed the Snohomish County CASA scandal, a key funder for CASA says it’s “looking into” issues raised by the firm.

The federal Office of Juvenile Justice and Delinquency Prevention provides grants to National CASA and local CASA programs. The ABC Law Group is asking that  “funding from OJJDP that goes to the CASA program in Snohomish County, Washington be investigated for ethics violations.”  They’re also asking for “a federal investigation/oversight into this program which receives your funding.”

Less than 24 hours after receiving the request, OJJDP Administrator Caren Harp replied “We’re looking into it.”

The law firm also filed a formal complaint with the Executive Committee of the National CASA Board of Directors. The board is chaired by William Bell, who also is President and CEO of Casey Family Programs.

The complaint asks National CASA to investigate the Snohomish program for “on-going ethics violations which have now been shown to have hurt families.”  The complaint cites the recent scathing decision from a Washington State appellate court which “held that our CASA program engaged in the destruction of evidence, spying, perjury, abusive use of litigation, threatening lawyers and violating the appearance of fairness.”

Up to now, National CASA’s response can be summed up this way:

You can find out all about the Snohomish County CASA scandal here.

The generic CASA doesn’t look much like the real CASAs

The complaint to National CASA also seeks an investigation into “false advertising and recruitment practices at Snohomish County.”

Among other things, there’s the matter of this flyer published by the program. See that nice picture of an African-American man – the only photo depicting a CASA volunteer?  There’s just one problem:  Right now, according to the Snohomish County program itself, of the 57 volunteers in the program, the total number of African-American volunteers is exactly zero.  The complaint notes that “The flyer to promote CASA contains more diversity regarding African American families than the entire program itself.” 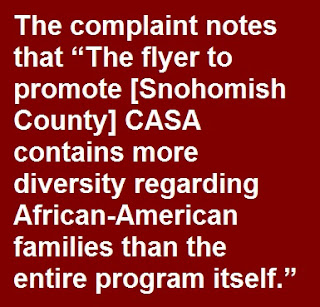 And Snohomish County is not alone. NCCPR ran a Google Image search. We found the same photo of the same volunteer on websites for CASA programs in Kansas City, Missouri, Jefferson Parish, Louisiana, Northern Neck CASA in Virginia, Blue Ridge CASA, also in Virginia, Clayton County CASA in Georgia, the Texarkana Texas CASA program and the Arkansas State CASA Association. On the Arkansas website, his picture appears above the caption “Our spotlight shines on those volunteers who have gone above and beyond the necessary.” But click on the link to find the real volunteer they’re profiling, and it’s a white woman.

Looks like Generic CASA used to be on the site for Kansas CASA too. That actually would be an improvement. About ten years ago, a local CASA organization in Kansas held a fundraiser that included a Blackface act.

Generic CASA also turns up in a slick promotional video from National CASA itself.

This doesn’t mean that none of these chapters has an African-American volunteer.  But, as noted above, the one in Snohomish does not.

We also know that CASA volunteers are 80 to 90 percent white.  And we know that, according to the most comprehensive study ever done of CASA, commissioned by the National CASA Association itself, volunteers spend less time on a case if the child is Black.

Yet still, National CASA has not responded to the scandal in Snohomish County.  Perhaps now, they’ll come up with a response better than this:

Posted by National Coalition for Child Protection Reform at 2:13 PM