The Commissioner of Philadelphia’s Department of Human Services, Cynthia Figueroa, didn’t know what was going on at an institution where her agency warehoused scores of children. But she should have known.

It took me two days to get through the Philadelphia Inquirer’s 6,000+ word expose of the nation’s oldest “reform school,” the Glen Mills Schools in Delaware County, Pa.  That’s not because it isn’t gripping reading. On the contrary, it’s a compelling, rigorously documented narrative.  But it was unbearable to read the litany of horrors allegedly inflicted on youth at the institution in one sitting.  (Glen Mills denies the findings in the Inquirer story. The institution reportedly has sent out a six-page memo to juvenile justice officials in response.)

Don’t let anyone kid you into thinking Glen Mills is an aberration.  At the end of last year, the Education Law Center and the group that calls itself Children’s Rights found serious, widespread problems at Pennsylvania youth institutions – and their report was based only on officially reported incidents.

But perhaps the best indication that Glen Mills is no aberration comes from how Glen Mills reportedly stopped youth and their parents from complaining about abuse: They reportedly warned that, if they complained about abuse, the youth would be sent someplace worse.

But there is one aspect to the story that is almost more disturbing.  Though Glen Mills took in youth from all over the country, in recent years 40 percent of them have come from Philadelphia – courtesy of the Philadelphia Department of Human Services.  Philadelphia DHS pays Glen Mills $52,000 per-year per-child for the privilege of warehousing youth there. It’s possible that without Philadelphia DHS Glen Mills could not have stayed in business.  That means a succession of agency leaders, including the current commissioner, Cynthia Figueroa, share responsibility for what happened there. 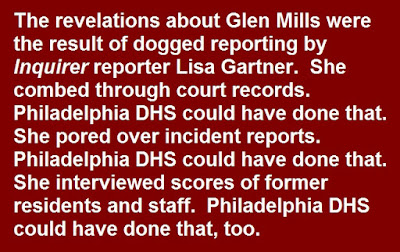 In fact, Philadelphia DHS could have done something more: Made unannounced visits (though as Gartner documents, it wouldn’t have been easy).

I can hear the DHS Excuse Machine already: Hey, it’s not our fault, they'll say. In Pennsylvania, the state Department of Human Services actually licenses places like Glen Mills, and if the state says the place is o.k., how are we supposed to know?

But while the state hands out the licenses, it’s Philadelphia DHS that decides if Philadelphia youth have to be warehoused at Glen Mills and similar institutions. The young people themselves have no say, and neither do their parents. So it’s damn well Philadelphia DHS’ responsibility to know.

The problems Gartner documents go back decades. So it’s not as if Figueroa had no reason to look deeper.  News accounts have hinted at what was just below the surface.  In fact I wrote about one such account while doing a report about child welfare in Rhode Island (where a local judge was so in love with Glen Mills that he sent the head of the state Court-Appointed Special Advocates (CASA) program to see how wonderful it was. Glen Mills paid the airfare).  It’s all laid out in this NCCPR report, starting on page 14.

The abysmal failure of local and state children and youth agencies to scrutinize the Glen Mills program despite the filing of many incident reports of abuse over the years, as well as the persistent rumors of a “fight club” culture there, is simply inexcusable. [Emphasis added.]

What Glen Mills says about its own program

The nature of the program itself should have been cause for alarm. As we noted in our Rhode Island report, Glen Mills boasts of using “peer pressure” and “group confrontation” to manage behavior.

As the Inquirer story explains,

To this day, reporting on their fellow classmates earns students “status," allowing them to move through campus without adult supervision and enjoy privileges like home passes and the chance to compete on sports teams.

But even the Child Welfare League of America, a trade association for public and private agencies, condemns this approach.  According to CWLA’s so-called “standards of excellence” for “residential services”:

The following practices shall be prohibited under any circumstances: corporal punishment such as slapping, spanking, paddling, or belting; marching, standing or kneeling rigidly in one spot, or any other kind of physical discomfort; denial or deprivation of sleep or nutrition: denial of access to bathroom facilities; verbal abuse, ridicule, humiliation, shaming or sarcasm; punishing a group of children for the actions of one or a select few; withholding family visits; other impingements on the basic rights of children to care, protection, safety, and chemical, mechanical or peer restraint. [Emphasis added]

Was Figueroa aware of Glen Mills’ own stated practices of “peer pressure” and “group confrontation”? Was she aware of the CWLA standards concerning this approach?

A poor response to an earlier incident

Or consider what happened as recently as August, 2018.  As Gartner explains in her story:

The Inquirer reported that a Glen Mills counselor had lifted a boy in the air, slammed him down on his back, then choked the asthmatic teen for several minutes while he cried, “I can’t breathe.” 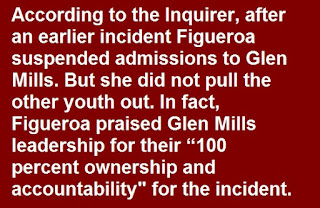 Figueroa suspended admissions to Glen Mills. But she did not pull the other youth out. In fact, Gartner writes, Figueroa praised Glen Mills leadership for their “100 percent ownership and accountability" for the incident.

Yet now, Figueroa's tweets almost leave the impression she exposed the problems at Glen Mills.  When Philadelphia DHS announced – after the latest Inquirer revelations – that it is finally pulling the youth it sent to Glen Mills in the first place out of there, Figueroa tweeted:

@PhiladelphiaDHS commitment is and continues to be safety for our youth! We have demanded and and [sic] will continue to do so

But Figueroa has been running DHS for two-and-a-half years, and all that time the agency was sending youth to Glen Mills.  Why didn’t she demand “safety for our youth” during all that time?

Then, when Gartner tweeted that, in the wake of her reporting, the executive director and chairman of the board of Glen Mills are “stepping aside,” Figueroa retweeted it with the comment “Demand quality for youth!”

I’m not suggesting that Figueroa actually knew what was going on.  But she should have known.  And it’s not just Figueroa.  The problems have festered for decades. Her many predecessors share responsibility.  And it’s not just Philadelphia DHS.  Glen Mills gained a nationwide reputation for being, as the Inquirer put it, “the Harvard of reform schools.”  So all of child welfare and juvenile justice needs to do some soul searching.

Why didn’t they know? Perhaps they didn’t want to know.

Institutions such as Glen Mills feed off places like Rhode Island, which takes away children at one of the highest rates among the states, and Philadelphia, which, notwithstanding Figueroa’s desperate attempt to fudge the figures, takes away children at the highest rate among America’s big cities.  Those high rates of removal leave states and localities begging for beds – and beggars can’t be choosers.

And yes, high rates of removal affect institutions for children labeled “delinquent” too.  That’s because children consigned to foster care are more likely to commit acts that will get them labeled delinquent.  Indeed, whether a child is labeled dependent or delinquent may depend on which “system” notices them first.

DHS would say that they are continuing to reduce the number of children it institutionalizes, something I noted during my recent written testimony to the Philadelphia City Council.  But if DHS were not taking away children at such an obscene rate, it wouldn’t have needed to use Glen Mills at all.

Get the children who don’t need to be in foster care back home and there will be plenty of room in good, safe foster homes for the children who really need them.  Would foster parents take such “difficult” children?  They would if DHS took the $52,000 it spends per child per year to warehouse them at places like Glen Mills and spent it on intensive support for the child’s own family or a foster family.

Once again, I would urge those who still think institutionalization is the only answer to watch this video in which Karl Dennis, the father of Wraparound explains how it was used to keep a youth safely in his own home – after the local jail found him too hard to handle:

As noted above, Figueroa actually had been on the verge of resuming sending Philadelphia youth to Glen Mills – based on the institution’s promises to do better.  Then, according to an Inquirer follow-up story,  in the wake of the most recent revelations, Figueroa now says

She has been “crystal clear” that the school’s leadership team needs to go, she said, and even then she would have to see a “significant shift in culture.”

But institutions are inherently unfixable.  The culture of institutionalization, even without physical abuse, is poisonous for children and youth.

The place that really needs a “significant shift in culture” is Philadelphia DHS.
Posted by National Coalition for Child Protection Reform at 11:01 PM