The vastly overhyped “Family First Act” comes complete with a “presents for pimps” loophole.  That will encourage more tragedies like the one at Hawthorne-Cedar Knolls.

It’s always cause for celebration when a place that institutionalizes children is forced to close.  So tomorrow is a day to celebrate.  The residential treatment portion of Hawthorne-Cedar Knolls, an institution in Westchester County, north of New York City, is scheduled to shut down.

But don’t celebrate too much. A new federal law actually makes it easier to keep such institutions going, and set up new ones.

The shutdown of the residential treatment portion of Hawthorne-Cedar Knolls won’t happen because the agency that runs it, the Jewish Board Family and Children’s Services, had a crisis of conscience. It will happen because the pressure from upset neighbors and state regulators became too much. What was upsetting them? Oh, just the usual: violence and sex trafficking. 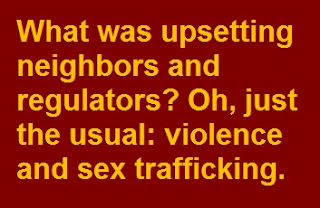 The mere fact that an overwhelming body of research finds residential treatment to be a failure never seems to be enough in itself to shut these places down.  Neither is the fact that almost none of the young people institutionalized in such places really need to be there.  There is nothing an RTC can do that can’t be done better with Wraparound programs, in which all the help a child needs is brought into the child’s own home or a foster home.


Further evidence for this can be found just by looking at what was done when Hawthorne-Cedar Knolls was forced to start shutting down, a process that started nearly a year ago.  According to the Rockland / Westchester Journal News:

When it was announced Cedar Knolls would close, there were 54 youths staying there out of a capacity of 78. The youths were expected to go back to their families or be placed with foster families. The final six children are to be transferred a facility in New York City, a spokeswoman told The Journal News on Thursday. [Emphasis added.]

Which raises an obvious question: Why were they institutionalized in the first place?

Yes, most people who work in and run such places mean well. Their intent is to help vulnerable children and they've convinced themselves they're doing just that.  But the evidence says otherwise.

To really understand this story, it’s worth taking a trip through time.

The first time I read about Hawthorne-Cedar Knolls was when it and a sister institution, Linden Hill, were exposed as hellholes by New York Newsday.  It was 1990, and reporter Michael Powell found that the institutions were

plagued by violence, unchecked sex, and poor supervision. ...  Said one counselor: "They have lost sight that the program is no longer safe to kids.  It's outrageous."

When confronted, the institutions did what they so often do: They blamed the children.

In one case, a teenage boy with a history of aggressive sexual behavior allegedly forced a 14-year-old girl to have sex with another boy. The director of Linden Hill said the sex was consensual. “Do you set up a situation that is locked down or do you allow kids to try their wings?” he said.  “[You ask] how could it happen? Well, it’s almost inevitable. Love knows no locksmith.”

In a just world, the 1990 expose should have been enough to shut these places down.

Unfortunately, a few years later, in spite of such high-quality journalism, it was New York Newsday that actually shut down.  Hawthorne-Cedar Knolls kept right on collecting hundreds of dollars per day per child to “treat” children, even though, as noted earlier, the evidence is overwhelming that residential treatment is a failure.

Twenty-seven years after that first New York Newsday expose, the young people at Hawthorne- Cedar Knolls were “trying their wings” once again – running away in massive numbers; massive as in 73 percent of them in a single year.

The New York Times reported that though the institution supposedly was treating victims of sex trafficking, the fear was that the runaways were falling victim to sex traffickers. 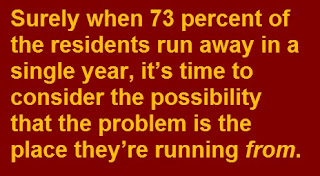 Once again, the institution blamed the victims. The Times’ explained the supposed “dilemma” for such places: They can’t “treat” people who keep running away, but if you make it harder for young people to run, then the places become more like jails – and people who have been victims of sex trafficking shouldn’t be treated like criminals.

The headline on the Times story was: “How Do You Care for Sex-Trafficking Victims if You Can’t Hold On to Them?” But the story omitted the answer: You place them with people they want to hold on to – in other words, a family.  That, apparently is exactly what happened to most of the children at Hawthorne-Cedar Knolls, but only when the institution was pressured into closing.

Surely when 73 percent of the residents run away in a single year, it’s time to consider the possibility that the problem is the place they’re running from.

2018: A pipeline to prostitution

Now, the Times is back with a follow-up story.  The fears were correct.  As the story puts it:

On Thursday, the breadth of a pipeline carrying young women out of Hawthorne and into prostitution became clearer. Nineteen people were charged in a sex-trafficking ring that exploited young women and girls as young as 13 years old, federal prosecutors said.

At least 15 victims were in the child welfare system, including nine who were residents of Hawthorne, the prosecutors said. …

She said the accused traffickers capitalized on that vulnerability. “They approached victims as if they had a romantic interest in them,” she said. “They offered them a place to stay and then they pushed them into prostitution.” [Emphasis added.]

One wonders what that former director of Hawthorne’s sister institution might have said in response.

The good news: No one from Hawthorne-Cedar Knolls has been accused of being part of the alleged trafficking ring, or even knowing about it. The bad news: It all went on right under their noses.

As for all that violence reported back in 1990?  Well, let the Journal News tell you. This story about Hawthorne-Cedar Knolls and another RTC in the area was published last Friday:

Things got so bad at local residential treatment centers for troubled youth that town police were responding to incidents on the two campuses multiple times on the same day.

In recent years, more than one squad car had to be dispatched on each call because of the potential for violence, with about one-third of all Mount Pleasant police calls tied to the two facilities and its young residents.

The “presents for pimps” loophole Anyone could have seen all this coming.  Predators go where the prey is.  The role of group homes and institutions in making sex trafficking easier has been documented over and over.


And that’s what makes the callousness and cynicism of America’s group home industry so breathtaking.  They used the desperation of Members of Congress to pass the vastly overhyped  so-called “Family First Act” to make tragedies such as this even more likely.

The law puts some very minor, easy-to-evade limits on when the federal government will help foot the enormous bill for institutionalizing children in group homes and residential treatment centers.

But the group home industry chafed at even these minor restrictions. So they added what should be called the “presents for pimps” loophole.  The spigot of federal dollars stays open for:

A setting providing high-quality residential care and supportive services to children and youth who have been found to be, or are at risk of becoming, sex trafficking victims

Never mind that such settings are probably the worst possible place for such children and youth.

The ugliness is on the inside

Even the Times accepted one time-honored ploy of children’s institutions everywhere. The latest story declares that

Hawthorne Cedar Knolls was on idyllic, green grounds. It was landscaped to give some peace and stability to the emotionally troubled teenagers who were placed there.

The Journal-News, which, in the past, has done some of the most sophisticated journalism in America on residential treatment, fell for it. They accepting an invitation last year for an “exclusive tour” of the place, and then wrote a story (with 25 photos) that begins:

Passing through the hallways, the residence areas at Hawthorne Cedar Knolls could be mistaken for college dorms.

Couches lining common rooms. Pastel-colored walls with busy bulletin boards. Phrases like "I am beautiful" scrawled on the chalkboard-like backs of bedroom doors.

It's a setting where young people are encouraged to be creative and grow. It's also a setting where they are offered help to handle the hardships that life has dealt them.

It’s all straight out of the group home industry propaganda playbook. They claim the very presence of their lovely landscaping creates a “therapeutic milieu.”  Except, again, there is overwhelming evidence that, no matter what the “milieu,” residential treatment doesn’t work.

The actual target of the “therapeutic milieu” is visitors.  It exists so the people who run such places can say: “How can you call us an institution? Look how pretty everything is – we’re so home-like.”  The milieu is intended to convince visitors that such places must be doing good things for children and couldn’t possibly be abusive.

Yes, the grounds of residential treatment centers often are pretty.  It’s their souls that so often are ugly.
Posted by National Coalition for Child Protection Reform at 3:04 PM