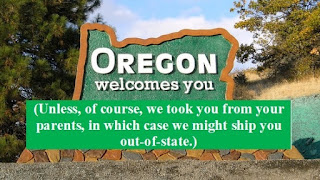 Among the justifications offered up for shipping Oregon foster children to an allegedly abusive institution in Iowa: Oregon is a small state, so it doesn’t have the "best treatment services."

Iowa is a smaller state.

1. Disability Rights Washington issues a report alleging widespread abuse and prison-like conditions at Clarinda Academy an institution in Iowa to which Washington State sends foster children it doesn’t know what to do with.

2. Washington State responds by promising to take the foster children for whom it has responsibility out of this allegedly awful place – and move them to other institutions.

They know nothing, nothing about any abuse of Oregon children. They say they’re confident that Clarinda never abuses children from Oregon, so those children are just going to have to stay there.

Now, the latest turn of events:

In an op-ed column for the Statesman-Journal in Salem, the director of the Oregon Department of Human Services Child Welfare Division, Marilyn Jones, offers up a justification for this cruel, callous treatment of children that is mind-numbing in its mediocrity.  What makes Jones’ response to dispiriting is that it is so typical of the thinking – or lack of thinking – behind child welfare in America.

This isn’t the extremism of the take-the-child-and-run fanatics in child welfare, it’s just the plodding, everyday unthinking norm. 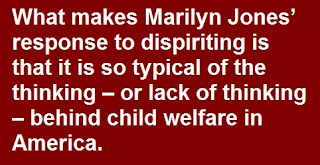 Jones’ column reads like it was written by one of those experimental computer programs that can churn out routine news stories Take one cliché from column A, another from column B.  So it’s worth going through it point-by-point, and then asking a couple of fundamental questions:

Jones begins with one of the old standbys: Things are so different now from when she started 20 years ago.  The children’s problems are just sooooo much more difficult now.

Well, I started writing about child welfare as a reporter more than 40 years ago.  And everyone in child welfare making excuses for their failures said exactly the same thing: The children we’re seeing “now,” (in the 1970s, that is), have problems that are sooooo much more difficult than they were back in the 1950s.   Such claims go back even further. The oldest claim I’ve found, so far, that the children’s problems are so much worse “now” was written when “now” was 1948.

Then Jones tells us that because of Oregon's size, it doesn't have the "best treatment services." Therefore, she says,

Oregon, like other states with small populations, needs to use out-of-state services.

Of course!  That explains why children are being shipped to Iowa – which has a smaller population than Oregon. 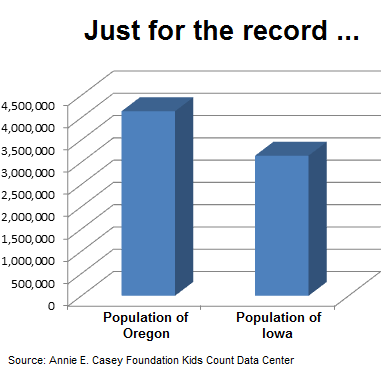 Then comes another classic:

We work through the juvenile court system, where a judge must sign an order to place children out of state.

That, of course, is the same rationalization used to justify taking away children needlessly in the first place.  But since neither children nor parents typically have effective legal counsel, the judge is hearing only the child welfare agency’s side of the story. And that’s why they’re far more likely to wield rubber-stamps than gavels.

Since 1975 Oregon has followed the rules and procedures of the Interstate Compact on the Placement of Children, uniform legislation adopted by all 50 states that mandates any placement must be approved and monitored through the compact.

But the ICPC does nothing to ensure that Oregon children, institutionalized in Iowa, are really safe. What the ICPC really does is formalize delay, incompetence and buck-passing.  It is among the impediments to a well-functioning child welfare system.  Everyone n child welfare knows this.  Well, everyone except, perhaps, a child welfare leader who also doesn’t seem to know that Oregon is bigger than Iowa.

When a child is placed out of state, our staff participate by phone in ongoing treatment planning with the child.

And what better way to know if a child is being abused than by calling him or her on the phone, right?  It’s the perfect way to build trust!  And staff at an allegedly abusive institution would never think of standing nearby while the child is taking to the worker.

They also can call the child and visit the facility to meet face to face and ask the child how they are doing.

Well of course they can. But do they?  And in terms of the information gleaned, what is the difference between this kind of visit from someone parachuting in from a thousand miles away and when Red Cross workers would visit POW camps where prisoners would assure them that, really, truly, they were being treated just fine.

We contract with independent, third-party professionals to monitor the child’s well-being and conduct private, in-person meetings every 30 days.

So a caseworker who has no stake in this child has to schlep out to Clarinda and talk to the child and then report back to some other caseworker in Oregon who probably has little or no idea who the child is. Yep, that’s reassuring.

But most important: In spite of all these supposed safeguards, Disability Rights Washington which has no vested interest, still found what it says is widespread abuse.  And they found problems far beyond overt acts of abuse. For every child allegedly abused, many more were subject to what DRW alleges is a demeaning, dehumanizing culture of everyday life at Clarinda – including even a rule against singing.  As I noted in a previous post:

● The no-singing rule is one example of the prison-like rigidity to every aspect of daily life.  Others include having to move from place to place lined up single file, being barred from talking to the opposite gender, almost never being allowed off the facility grounds and severe restrictions on phone calls to friends and families.  Some dorms add on restrictions such as no leaning on walls, no talking during meals, no walking on grass, and no going to the bathroom without permission.

● There is a coercive, almost Orwellian system of exploiting peer pressure to keep the young people in line, complete with “hundreds, if not thousands” of unwritten “norms” the youth have to follow.  (Clarinda officials told DRW their system was modeled on an institution in Pennsylvania, Glen Mills. This is not exactly reassuring considering that just last week, the Philadelphia Inquirer concluded that “Serious violence is both an everyday occurrence and an open secret at Glen Mills, and has been for decades.”)

● When peer pressure wasn’t enough, DRW found that Clarinda misused and overused painful physical “restraints.”  DRW reports that every student they spoke to “reported that restraints they experienced were physically painful and frequently resulted in back, shoulder, and neck pain for several days or weeks.”

Yet Marilyn Jones apparently wants us to believe that if a child says “No, wait, I’m from Oregon!” this doesn’t happen.

Imagine what would happen if, say, independent inspectors issued a similar report about, say, a summer camp, and a parent said: “I don’t care what this report claims, I trust the camp director.” Parents have been charged with neglect for far less.

But the worst of the rationalizations is the claim that institutionalization is necessary at all.  It isn’t.  Oregon children are being shipped to out-of-state institutions because Oregon takes away too many children. Period.  Get the children who don’t need to be in foster care back home and there will be plenty of room in good, safe foster homes for the children who really need them.  Provide intensive wraparound services to the children and the foster families, and there will be no need to institutionalize those children.

I hope everyone in Oregon will read the full DRW report. Then read Jones’ op-ed. And then ask two questions: 1. Is Clarinda really an example of the "best treatment services"?  2. Is Marilyn Jones really the best person Oregon could find to determine the fate of the state’s most vulnerable children?
Posted by National Coalition for Child Protection Reform at 10:24 AM