Some of the “littles,” as Marilyn Jones so cloyingly calls them, could wind up in “repurposed” juvenile jails.

In December, 2016, I wrote a post for this blog called Fixing Oregon foster care becomes a pathetic game of whack-a-mole.

I described how an expose of abuse in foster care by the alternative weekly Willamette Week whacked the state into raising standards for foster homes.  So the state wound up warehousing foster children in offices and jails.  So -- whack! -- a child advocacy group brought a lawsuit to prohibit the practice.  The Oregon Department of Human Services (DHS) settled.  And children promptly wound up warehoused in hotels. So –whack! – there was another lawsuit, and another settlement.

I discussed how this would keep happening until the state faced up to the real problem: Oregon tears children needlessly from their parents at a rate far above the national average.

Now, more than two years later, behold! The Oregonian reports that the foster children are back in juvenile jails. But this time there’s a twist.  They’ve repainted the cinderblock, added some pretty pictures and slapped new labels onto the jails – so now, the Oregonian tells us, they’re “repurposed juvenile jails” [emphasis added].

The Oregonian story then tells us that

Critics question whether former jails are the right place for foster children.

The story goes on to note that

for many, such placements mean moving far from their home communities, switching to unfamiliar and sometimes segregated foster-child-only schools and losing the chance to live in the care of a parent figure instead of a rotation of shift workers. … Nationally the movement in child welfare is away from caring for children in institutional settings, which research has shown yields poorer outcomes.

But once again, as with every other story I’ve seen in the Oregonian over the past several years, this story makes no mention of the root cause of this pathetic game of whack-a-mole: Oregon’s obscene rate of child removal and the failure of state government, the state legislature, and almost all of the state’s media to confront it.

The one thing that’s changed – for the worse

But one thing has changed.  It used to be that state child welfare officials would say that of course it’s terrible to institutionalize kids, but they would claim they have no choice because of a “shortage” of foster parents.  That’s not true – Oregon does not have too few foster parents, Oregon has too many foster children.

But leave it to Oregon Child Welfare Director Marilyn Jones - the poster-adult for child welfare mediocrity to suggest something even worse.  Jones is now saying that no matter how many foster parents Oregon recruits they will never be capable of caring for all the children who are now institutionalized, and even more need to be institutionalized in the future.  So either Jones has an astonishingly low opinion of Oregon foster parents or Jones is clueless about best practice in child welfare.

When Jones says Oregon should institutionalize more children, she’s not just talking about teenagers – though that’s bad enough.  Jones told the legislature she wants more beds to institutionalize children as young as five – children she cloyingly refers to as “the littles.”  Calling for institutionalizing five-year-olds should, in itself, disqualify someone from running a child welfare system. 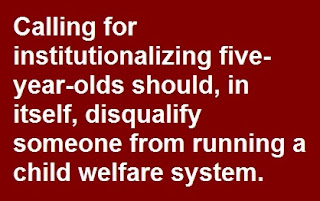 Indeed just this week, Oregon Public Broadcasting told the story of exactly the sort of child Marilyn Jones wants to give up on and institutionalize – and how this child, age 9, was kept safely in his own home with intensive home-based services.  Of course this happened in Tennessee, not Oregon.  (The OBP story also broke the mold for the state’s media – it actually zeroed-in on the problem of Oregon’s high rate of tearing apart families.  OPB is the only media organization in the state to bring this up fairly regularly.)

But Jones and her colleagues in DHS management are not the only ones to blame for this mess.

● Almost as culpable is State Sen. Sara Gelser. Oregon media seem to believe no child welfare story is complete without the obligatory quote from Gelser.  But Gelser has made the crisis worse by promoting hype and hysteria over high-profile tragedies and undermining what little DHS has tried to do to curb needless foster care.

Gelser was the major force behind legislation that killed Oregon’s “differential response” initiative – either without waiting for or simply ignoring the final results of a comprehensive independent evaluation. (The evaluation is dated June, 2017, the bill passed in early July of that year.) According to that evaluation:

our analyses find no evidence that DR [differential response] undermines the safety of children in Oregon. [Emphasis in original.]

The evaluation found that families receiving a “differential response” intervention were significantly less likely to have another substantiated report of child abuse than a matched comparison group of families who got a traditional Oregon child protective services investigation.

Even now, Gelser seems unaware of the fact that institutionalization simply does not work. Her comments suggest that she would be just fine with institutionalizing children if they just made the places really pretty – so they didn’t look like jails – and the people running them used all the right buzzwords, like “trauma-informed.”

So when Gelser then tells OPB that she’d like to do more about prevention (but notice it’s only the non-controversial net-widening primary prevention to which everyone pays lip service) it should be taken with more than a grain of salt.  OPB also reports that

It’s time, Gelser said, for the state to figure out how to find the appropriate place for the state’s most vulnerable children.

Actually, it’s time for Gelser to figure out that the appropriate place for a large number of those children is their own homes.

[UPDATE, MARCH 23: Gelser has responded to some of the above.  You can read all about that here.  But she still has not explained why she did so much to kill "differential response" even after the independent evaluation found it was safe.]

● The organizations that brought the whack-a-mole lawsuits – the one that said you can’t use jails and offices, but didn’t mention hotels, and then the one that said you can’t use hotels but was silent about “repurposed” jails -- also share responsibility.  Since the lawsuits never addressed the high rate of removal, DHS was never forced into the one solution that would really work: Taking away fewer children, thereby opening places in good foster homes for all the children who really need them.

The Oregonian reports that

The no-hotels settlement was supposed to get more children and teens who’ve been removed from their families into the family-like settings that experts and Oregon’s foster children’s bill of rights say gives them the best chance to flourish.

But having already seen that the lawsuit against keeping kids in jails led to keeping kids in hotels, how could they have possibly believed that stopping DHS from warehousing children in hotels wouldn’t wind up sending them right back to jails – albeit “repurposed” ones?

● Most of the state’s media also share responsibility – especially the Oregonian, which for years has chosen to ignore the state’s outrageous rate of child removal.

If “repurposed” doors on “repurposed” jail cells start slamming behind five-year-olds anytime soon, primary responsibility rests with Marilyn Jones.  But Sen. Gelser, the lawyers who brought the whack-a-mole suits, and the Oregonian all will have helped to put those five-year-olds in those cells.
Posted by National Coalition for Child Protection Reform at 1:43 PM