Video of NCCPR's spoken testimony, followed by a statement from DHS-Give Us Back Our Children is here:

If all goes well, at just about the time this post goes live, I will be among those testifying before a committee of the Philadelphia City Council.  The topic will be what it usually is in Philadelphia: that city’s dismal outlier status when it comes to tearing apart families.  It has the worst record among America’s big cities, even when rates of child poverty are factored in.

After reading a story in the Philadelphia Inquirer Monday, it’s not hard to see why this is still the case.

The story is about the councilman whose legislation prompted the hearing, Councilman David Oh.  He had his own run-in with the Philadelphia Department of Human Services.

Every Sunday, Oh teaches martial arts to his children. One morning, his 8-year-old son was injured. Councilman Oh and his wife rushed the boy to the hospital.

Yes, this is going exactly where you think it’s going. From the Inquirer story:

A social worker arrived and asked Oh and his wife to leave the room so she could speak to their son alone. After doing so, she told the Ohs she was filing a report of suspected child abuse …

Oh said he tried to show the social worker cell phone photos of him doing martial arts with his kids, to show how common the activity is for the family. …

He said he was bothered that the social worker could not articulate why she thought the incident was more than an accident. He said she told him she typically reports injuries children suffer in all sports.  "She insinuated that [a report] was no big deal, it was routine," Oh said. "And when I pressed her for a reason, she made a comment: 'You're a grown man, you shouldn't be teaching your son judo. He's 8.'"

(Just for the record, a quick Google search suggests there is nothing unusual about 8-year-olds learning judo – and I would think the best teacher would indeed be “a grown man” or woman.)

DHS followed up and ultimately decided the report was “unfounded.” But even unfounded reports are maintained in the state’s central registry of alleged child abusers for anywhere from one year to about a year and four months.

What DHS should have said

This would be the place for a good child welfare agency leader to step in and calm things down.

A good leader might say something like: “We understand the hospital’s concern over keeping children safe, but state law requires reports when mandated reporters have “reasonable cause to suspect” abuse. Clearly every sports injury does not qualify. Nor is there anything unusual about learning judo at age 8. So please don’t do this to families, and don’t waste the time our workers need to find children in real danger on cases like this.”

Instead, the Commissioner of Philadelphia’s Department of Human Services, Cynthia Figueroa, seems to have made everything worse.

Oh said Figueroa “defended the social worker's actions as in line with her directivefor workers to follow their intuition.” [Emphasis added.]

Unfortunately, this is not unusual. Frontline caseworkers sometimes say their decisions come down to "a gut feeling."  But this is the first time I've seen anything like that attributed to the head of a child protective services agency.

Whatever happened to laws, and regulations and, you know, evidence? 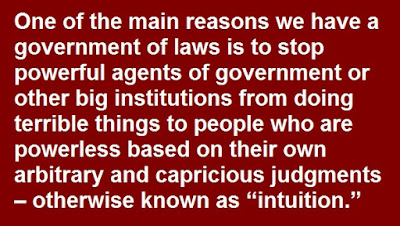 Would anyone tolerate a jury saying “We didn’t think there was actual evidence of guilt but our intuition told us he did it, so we found him guilty!” (Sadly, I’m sure juries have done that, but I doubt judges have actually encouraged it.)

Or what about police? Should they arrest people based on “intuition”?

Actually, there is a place where something similar happens in police work – and it’s caused outrage across the country.  Follow your intuition is the standard behind “stop-and-frisk” policing.  If anything, it’s even worse in child welfare.  Bad as it is to be stopped and thrown against a wall for no reason, at least afterwards you usually get to go home.  When child welfare agencies use their “intuition,” the children may be forced into foster care. 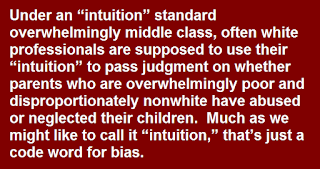 But if, indeed, DHS wants people to report alleged child abuse or neglect by following their "intuition," and if they want their own caseworkers to base their decisions on "intuition," then here's what happens under what might be called the Figueroa Doctrine:  Overwhelmingly middle class, often white professionals are supposed to use their “intuition” to pass judgment on whether parents who are overwhelmingly poor and disproportionately nonwhite have abused or neglected their children.  Much as we might like to call it “intuition,” that’s just a code word for bias.

This is illustrated by what happened when Nassau County, near New York City, instituted a process known as "blind removal meetings."  As soon as those making the decision on whether to remove a child were denied information about the family's race and neighborhood, their "intuition" changed, and removals of African-American children declined significantly.

One of the main reasons we have a government of laws is to stop powerful agents of government or other big institutions from doing terrible things to people who are powerless based on their own arbitrary and capricious judgments – otherwise known as “intuition.”

Given all that it’s no wonder Councilman Oh has suggested that Philadelphia begin exploring ways to make the whole process more rational.

According to the Inquirer:

Figueroa  said she has met with Oh twice and told him that she believed changing the reporting requirements would violate state law and could jeopardize the agency's license.

But while there are many issues with the whole mandatory reporting process and the laws surrounding it, the real issue in cases such as this is following the law as it already exists. Again, that law sets a standard of "reasonable cause to suspect." I suggested above what Figueroa should have said in that regard.

Instead, Figueroa dialed up the fear machine:

"It would also be incredibly chaotic in terms of an enforcement standpoint if each county decided to go rogue in how to adhere to the child protective services law.”

In fact, chaos is an apt term for Philadelphia child welfare as it exists right now. And there is already wide variation among Pennsylvania counties.

As the data on Philadelphia’s obscene rate of child removal make clear, it is DHS that has gone rogue. DHS has been a rogue agency for decades and it’s time, finally, to bring it under control.

Posted by National Coalition for Child Protection Reform at 11:00 AM