Child welfare in Oregon: An epidemic of willful ignorance


● The child welfare agency keeps children in an out-of-state institution even after learning about allegations of widespread abuse.

● The Oregon lawmaker who never misses an opportunity to grandstand about child welfare ignores real solutions. 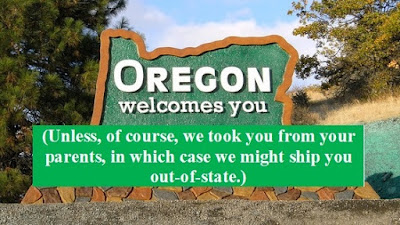 Last year, Disability Rights Washington (as in Washington State) published a report, discussed here, alleging serious, widespread problems at Clarinda Academy, an Iowa institution to which Washington State regularly shipped foster children it didn’t know what to do with.

The Washington State child welfare agency responded by doing the bare minimum: They promised to get the children out of Clarinda by the end of last month (I have seen no news accounts checking to see if they succeeded).  But that didn’t necessarily mean things got better for the children; some were simply institutionalized elsewhere, sometimes even farther from home.

Could any state possibly respond with even less concern and less compassion?

Last week, Oregon Public Broadcasting reported that Oregon also has been shipping foster children to institutions all over the country – including Clarinda and others run by Sequel, the for-profit chain that owns Clarinda.  But even though Oregon authorities know all about the Disability Rights Washington report, they are leaving the children in Clarinda and the other Sequel institutions.  According to OPB:

After the allegations of abuse in Iowa surfaced, a spokesman from the Oregon Department of Human Services said in an email, a representative of Clarinda Academy and Sequel visited Oregon to respond.

Oregon staff also flew to Iowa to check on the children at Clarinda, according to a DHS spokesman. In addition, the state says, Oregon contracts with third-party professionals to monitor children at all out-of-state facilities. Based on those visits, Oregon officials determined foster children being sent elsewhere are safe.

Right. Because of course, before deciding which children to subject to alleged abuse or other ill-treatment, staff are always going to ask what state they’re from. 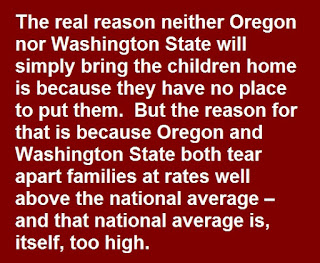 Of course the real reason neither Oregon nor Washington State will simply bring the children home is because they have no place to put them.  But the reason for that is because Oregon and Washington State both tear apart families at rates well above the national average – and that national average is, itself, too high.  Same thing with Rhode Island, which, as we documented in this report, (starting on page 25), also is an extreme outlier when it comes to taking away children, and also has had a chronic problem of shipping children out-of-state.  And it’s a perennial problem in West Virginia, which tears children from their families at one of the highest rates in America. 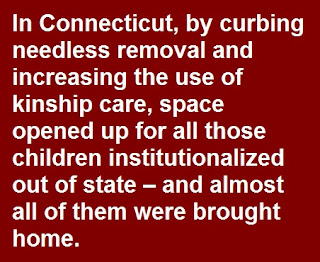 Compare these states to Connecticut – which used to have the same problem, but doesn’t anymore.

Connecticut used to tear apart families at a rate above the national average.  It relied heavily on institutionalizing children – sending many to institutions out-of-state.  Every high-profile death of a child “known to the system” would set off a foster-care panic – a sharp, sudden increase in children torn from everyone they know and love, and that would make everything worse.

So, of course, when confronted about its use of out-of-state institutions, Connecticut officials would use the same excuses heard now in Washington State and Oregon and West Virginia: Oh, we really hate to do this, but we have this terrible “shortage” of foster parents, so we have no place to put all these children

Then, in 2011, Joette Katz was named Commissioner of the state’s Department of Children and Families.  She refused to tolerate foster-care panics. She focused on safe, proven alternatives to taking away children.  She increased the use of kinship foster care – placement of children with relatives instead of strangers. And she pioneered an innovative in-home drug treatment program for cases in which substance abuse was an issue.

By curbing needless removal and increasing the use of kinship care, space opened up for all those children institutionalized out of state – and almost all of them were brought home.

New Jersey embarked on similar reforms, prompted by a class-action lawsuit consent decree.  New Jersey also benefitted from bold leadership in the immediate aftermath of that decree. Now New Jersey also takes children at a rate well below the national average – and New Jersey also has drastically reduced institutionalization in all forms, including out-of-state placements.

How one Oregon legislator makes everything worse

Though I’m glad Oregon Public Broadcasting exposed the fact that Oregon is refusing to remove children from Sequel’s institutions, one part of the story was frustrating.  OPB did what Oregon media always have done in recent years – they turned for the obligatory expression of shock and outrage to someone who has unintentionally made all of the state’s child welfare problems worse: State Sen. Sara Gelser.

It’s not that Oregon child welfare was wonderful before Gelser came on the scene; in fact it’s been awful for decades.  And it’s not that Gelser wants it to get worse.

But Gelser has poured gasoline on the fire – using every opportunity to push an agenda that can be boiled down to “take the child and run.”  She first came to prominence taking data out of context to claim that Oregon wasn’t subjecting enough children to traumatic child abuse investigations. Then she engaged in grandstanding when state child welfare leaders admitted the obvious: they can’t guarantee that all children in foster care are safe.  Then she helped to effectively kill one of the very few efforts Oregon has undertaken to try to curb needless removal, a differential response initiative.

All that is certainly not the only reason the number of Oregon foster children shipped out-of-state has doubled since 2017; it’s probably not even the main reason. But she sure isn’t helping. (And neither are other Oregon politicians, by the way.)

And now, Gelser has the nerve to say she doesn’t know how to solve the problem, telling OPB:

“I don’t know the answer. If we bring them home, where do they go?” she said. “… We have kids with significant needs, and we don’t have what they need to help them and those kids don’t have time to wait for us to figure it out.”

Of course Gelser doesn't want children to be hurt.  I'm sure she believes her agenda will help them. But the problem with her agenda is that it's not really a children first agenda. Over and over, Sen. Gelser has failed to put the needs of children first.

So here’s how Oregon can find the answer. Check out what Connecticut did.  Check out other states that have safely reduced the number of children trapped in foster care.  And stop paying attention to a grandstanding politician who doesn’t know the answer because she doesn’t want to see it.
Posted by National Coalition for Child Protection Reform at 11:00 PM