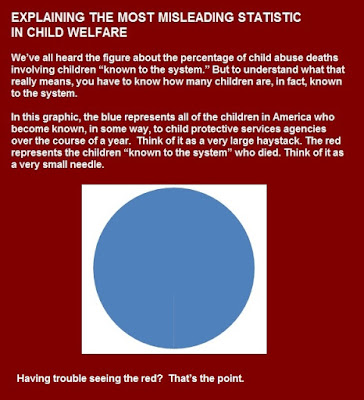 If you want to get people to surrender fundamental civil liberties you’d better scare the hell out of them.

Donald Trump understands this; it’s been his m.o. since he began his campaign. So when his administration started tearing apart families at the Mexican border he justified it with hype and horror stories.

The child welfare establishment gets it, too.  For decades they’ve used horror stories – and hyped, misleading statistics - to justify tearing apart families all over America. No, it’s not identical, but there are more similarities than differences.

As early as 1993, under the headline “Damned Lies and Statistics,” Time magazine called out what was then one of the worst offenders – Prevent Child Abuse America (as well as other groups crusading for other causes) for using “flagrantly flimsy figures.”

Ten years later, PCAA itself admitted to this:

While the establishment of a certain degree of public horror relative to the issue of child abuse and neglect was probably necessary in the early years to create public awareness of the issue, the resulting conceptual model adopted by the public has almost certainly become one of the largest barriers to advancing the issue further in terms of individual behavior change, societal solutions and policy priorities.

It’s not that the numbers themselves are necessarily wrong – but crucial context often is missing.  So we are often told that there are more than three million reports alleging child abuse every year. But we’re not told that more than 80 percent of them turn out to be false and most of the rest involve “neglect” – which often means only that the family is poor.

The most misleading statistic in child welfare

But the single most misleading figure in all of child welfare is the one I discussed recently in connection with the Orange County Register’s descent into “crack baby” journalism – the one about the proportion of child abuse deaths “known to the system.”

It is a figure built around the worst possible tragedy – child abuse fatalities.  The only acceptable goal for such tragedies is zero.  But if one really believes that even one such death is one too many, then there is no need to distort data to leave a misimpression about how often such tragedies occur right under the noses of caseworkers.  And that very distortion makes it harder to reach the goal we all share.

The more one favors a take-the-child-and-run approach, the more one harps on this figure – because the impression it leaves for the casual reader is vastly different from what the number really means.

So we read that “Of all the children who died in [name of state or locality] [fill in percentage] were previously ‘known to the system.’”

Typically, the percentage will be anywhere from one-third to two-thirds; the Register gave an even higher percentage, but did not explain how it came to that conclusion. 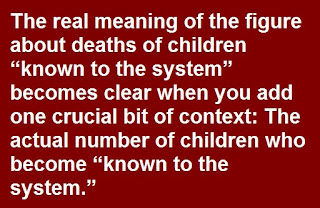 So one might read in a news story: “Half of all child abuse deaths involved children previously known to child protective services.”  Wow. That sounds like half the time, children known to CPS die.  Of course the figure means nothing of the sort.  The real meaning becomes clear when you add one crucial bit of context: The actual number of children who become “known to the system” over the course of a year.

So now, let’s look at the numbers nationwide.

According to the latest Child Maltreatment report from the Department of Health and Human Services, there were an estimated 1,720 child abuse deaths in 2017.  Of that total, 27.3 percent were previously known, in some way, to authorities.

Those who promote hype and hysteria are always saying that every figure they want to hype is an underestimate.  But this time, let’s assume they’re right.  Just for the sake of argument, let’s double the number of child abuse deaths and double the proportion “known to the system.”  That would give us a total of 3,440 deaths, of which 1,878 involved children “known to the system.”

So every year, CPS agencies are expected to figure out which of the 7,508,000 children will die if they don’t intervene in time.  It looks a bit like the graphic at the start of this post. This one: 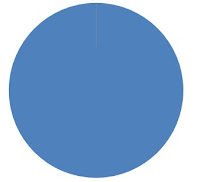 A tiny red needle in a big blue haystack.

But even that representation understates the difficulty involved for frontline caseworkers. In the graphic, all of the deaths are in one place.  In real life, they are much smaller needles scattered all over the haystack.

Even showing the needles in a different color can be misleading. Because while some of the case files turn out to have more “red flags” than a Soviet May Day parade, in many others there was no way to predict the tragedy that would follow.  As one former child welfare official put it: “For every one of these [death ‘known to the system’] cases, I can show you ten with identical circumstances where nothing went wrong.”

And then there is the whole definition of “known to the system.”  Again, some of those deaths were in cases where, in fact, the family was extremely well known to authorities, the problems were obvious and anyone should have seen the danger.  But most were not.  Sometimes “known to the system” means only that a report several years earlier had been screened out at a child abuse hotline.  So CPS investigators didn’t really know the family at all.

Where do we put 7.4 million children?

So what do we do? Investigate the families of all 7.4 million children?  Even if that could be done logistically – and it can’t – that would traumatize millions more children for no reason.  And, of course, the overload would be such that all the investigations would be sloppier and even fewer needles in that giant haystack would be found.

Or should we skip the investigating and just take away all 7.4 million children?  That way we know we won’t miss the needles because we’ve vacuumed up the entire haystack.  But where, exactly, would we put all those children?  And what would we do about placing so many of them at high risk of abuse in foster care itself?

So what’s the point of the most misleading statistic in child welfare? It’s not to get us to take away all 7.4 million – but it is an effort to get us to take away more of them, and traumatize more families with needless investigations, and beat back any attempts to impose openness, accountability and due process on the system.

But openness, accountability and due process are exactly what we need.  Because only a system that relies less on coercive intervention will have the time and resources to find those needles in the haystack, before it’s too late.

We know that because of something I’ve written about before, a study done by a liberal Texas think tank, the Center for Public Policy Priorities.  The study looked at what does, and does not, contribute to reducing child abuse deaths.

● The rate at which a state takes children from their parents does not contribute to more or fewer child abuse deaths.

● The rate at which a state screens in reports for investigation does not contribute to more or fewer child abuse deaths.

Here’s what does contribute to more child abuse deaths:

Which means, of course, the real solutions are pretty obvious.

In contrast, the misuse of the most misleading statistic in child welfare only makes things worse.  It encourages overloading caseworkers with even more false allegations, more cases in which family poverty is confused with “neglect” and more children needlessly torn from everyone they know and love.  And that leaves the workers even less time to find those very small needles in that very large haystack.
Posted by National Coalition for Child Protection Reform at 11:00 PM