I’ve often noted the multiple studies which find that 30 percent of America’s foster children could be home right now if their families just had decent housing.

But a massive 2015 study that recently has been rediscovered (I’ll get to who rediscovered it below) shows the figure actually might be much higher.  And the study has a new twist: Just providing the housing works far better than also inflicting all sorts of “services” on families who don’t want them and don’t need them.

In the study, conducted for the U.S. Department of Housing and Urban Development during the Obama administration, families living homeless shelters were assigned to one of four groups.  One group got nothing except whatever the homeless shelter had to offer.  The other groups got either priority access to long-term housing vouchers, commonly known as “Section 8” vouchers, or two versions of programs in which the housing vouchers were shorter term but the families also got various social work services.

Outcomes were measured using all sorts of variables including whether children wound up placed in foster care. 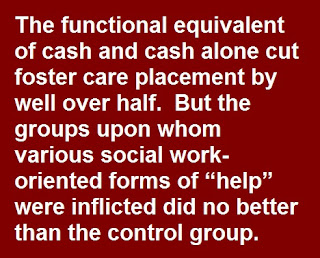 Since this is the NCCPR Blog you know where this is going.  Yep.  The families that got just the housing vouchers did best.  They did best on all sorts of variables – but especially notable is the finding on foster care.

For the control group, those who got no special help, five percent had lost at least one child to foster care at the end of the study period.  For the group that got plain old housing vouchers it was only 1.9 percent.

In other words, the functional equivalent of cash and cash alone cut foster care placement by well over half.

Keep the caseworkers out of it

But surely if we provided vouchers and social workers that would be even better, right?  Nope.  The groups upon whom various social work -oriented forms of “help” were inflicted did no better than the control group.  The best results came when government added housing and subtracted social workers.

As I’ve noted previously on this blog, other studies have produced similar results.  One study found that for every dollar states raise the minimum wage “substantiated” cases of what states call “child neglect” declines by ten percent.  In other words: child welfare systems routinely confuse poverty with “neglect” so if you reduce poverty, you reduce “neglect.”  At least three other studies found that similar small increases in income significantly reduced what systems deem to be child maltreatment.

Still another study documented dramatic improvement in child well-being for Native American families when casino revenue increased their income by an average of $4,000 per person per year. [UPDATE, JUNE 17, 2019: And now there's yet another study. This one shows that expanding Medicaid under the Affordable Care Act reduces what child welfare agencies call "neglect."]

But what sets the housing study apart is that, as noted above, it also compared getting nothing to getting housing for a shorter time but all sorts of “social services.”  This proved vastly less effective at reducing foster care – or improving the lives of families in any other way – than the cash equivalent alone.

In fairness, the study doesn’t prove that providing the services actually caused the worse outcomes. The outcomes might have been worse simply because the programs with all that social work also providing the housing help for a limited time. The housing-voucher-only approach allowed families to keep the vouchers for as long as their income kept them eligible. 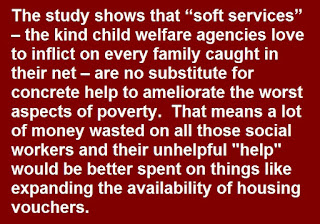 But the study does show that “soft services” – the kind child welfare agencies love to inflict on every family caught in their net – are no substitute for concrete help to ameliorate the worst aspects of poverty.  And that means a lot of money wasted on all those social workers and their unhelpful help would be better spent on things like expanding the availability of housing vouchers.


That too should not be surprising.  It’s not that it’s wrong to provide any kind of services.  There are times when “soft services” can be helpful – generally when they are provided by, say, a therapist who’s also helping a parent clean the house. (I’m not kidding about that; it’s how Intensive Family Preservation Services work.)

Try helping families instead of the helpers 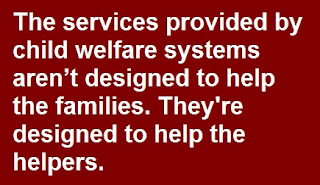 So we get endless counseling sessions and parent education classes which not only often do no good but can actually do harm, because they wind up stealing time that could be devoted to things like finding better employment – and better housing.  And, of course, the families have to engage in all these pointless classes and therapy sessions to check off all the boxes on their “case plan” so it all adds further stress for the family.

But boy is it great for the “helping” professions!

Decades ago, in his book, Families in Distress, Malcolm Bush explained how it happens:

“The recognition that the troubled family inhabits a context that is relevant to its problems suggests the possibility that the solution involves some humble tasks … This possibility is at odds with professional status. Professional status is not necessary for humble tasks … Changing the psyche was a grand task, and while the elaboration of theories past their practical benefit would not help families in trouble, it would allow social workers to hold up their heads in the professional meeting or the academic seminar.”

So we get housing assistance programs that concentrate on changing the psyche when they should really be focused on, uh, housing.

And it’s why it is not only wrong, but dangerous to take a “public health” approach to preventing child abuse.  What’s needed is a social justice approach.

But this challenges shibboleths of both the left and the right. 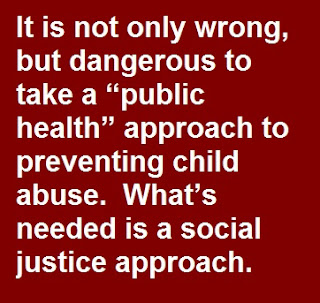 It challenges the self-indulgence of those on the left who prefer the “grand task” of changing the psyche and who want the psychic rewards of “healing” people they see as not evil, but definitely sick.

For the right, it challenges the notion that poverty is a moral failing and that any financial aid must be stingy on the cash and generous in bureaucratic requirements and general humiliation.

Early on, for example, the vastly overhyped Family First Prevention Services Act would have allowed federal reimbursement for concrete help to families – like emergency cash and, yes, housing assistance.  That was taken out of early versions of the bill after Republicans balked.

When homelessness itself exploded during the 1980s, conservatives insisted it had nothing to do with Ronald Reagan’s assault on anything that helped poor people. Instead, it was all supposedly a mental health problem, and if only we hadn’t shut down all those hellhole mental institutions everything would be fine.  In fact, as Ann Braden Johnson points out in her book Out of Bedlam, of anything, it’s the other way around: Prolonged homelessness can cause mental illness.

(Among those who continue to circulate this myth that homelessness was caused by shutting down institutions: Advocates of institutionalizing foster children, who cite it to scare governments out of shutting down their failed “group homes” “residential treatment centers” and other rebranded orphanages.)

This study once again shows either that the homelessness-is-all-a-mental-health-problem theory was self-serving nonsense – or housing has heretofore undiscovered therapeutic benefits.

Spinning the findings for right-wing consumption

So perhaps it’s not surprising that when Brent Orrell, a “resident fellow” of the American Enterprise Institute rediscovered the study he also felt the need to spin it for right-wing consumption.  In an essay entitled “When Nothing Beats Something” he writes:

In Washington’s policy battles, the time-tested adage says, “you can’t beat something with nothing.” The idea is that social ills require solutions and doing nothing is never the right thing to do — bad policy beats no policy every time. … But what if the facts on the ground say otherwise? What if “nothing,” on some issues, does beat “something”?

But since when is a housing voucher, provided directly by “big gummint” itself, nothing?

The control group in this study is the one that got nothing.  The group that gained the most did indeed get something: Housing vouchers -- the equivalent of cash assistance with few strings attached.

But the fact that just giving poor people money makes things better removes the keystone from the entire arch of modern conservative ideology: The idea that poverty is a moral failing and actually providing concrete help only encourages laziness and “dependency” collapses.

So I look forward to AEI endorsing a guaranteed annual income – with no degradation and no time limits.  And I can’t wait to see AEI support federal living wage legislation.

But if that’s too heavy a lift, how about just persuading your fellow conservatives to amend the Family First Act to allow the same sort of reimbursement now permitted only for an extremely narrow range of mostly “soft” services to go to concrete help to families, such as housing assistance, so their children aren’t consigned to the chaos of foster care.

Now that would really be something.
Posted by National Coalition for Child Protection Reform at 11:00 PM