Multiple organizations in Maine – but with the lead organizations dominated by private “providers” have put out a document they’re calling “A Framework for Child Welfare Reform” in that state.  Yes, there are some good things in it, but in general it's really a framework for false consensus.

The document is the latest to be released in Maine in the wake of what newspapers love to call a “spate” of child abuse deaths.  But instead of rethinking the take-the-child-and-run approach that contributed to these tragedies, and similar cases in 2018, the state has been doubling down.  They’ve been led, or rather misled, by the state’s child welfare “ombudsman,” Christine Alberi.  I describe the enormous harm she is doing in this previous blog post.

This new document isn’t anywhere near as bad as what the ombudsman has been doing – or what some state legislators have been proposing.  One section of the document would actually make things better.

But it also calls for a further expansion of the state’s family policing bureaucracy (including a whole bunch of new middle managers reporting to one of America’s worst child welfare agency leaders, Todd Landry) more power for the ombudsman and, to the extent that it endorses prevention, it is only as an add-on to the existing system.  There is nothing that would provide due process for families or in any way require a supremely powerful, unaccountable system to give up any of that power.

And that’s the key problem. In child welfare, we all say the same things, but we all mean different things by what we say: Nobody ever says: “I think foster care should be the first resort!”  Everyone says it should be the last resort.  Nobody ever says “Boy, do I hate prevention; if there’s one thing I can’t stand, it’s prevention!”  By and large, the people who say they support “prevention” are sincere. But the fact that rates of child removal vary enormously from state to state and sometimes even county to county – or, as in Maine, they can shoot upwards with no evidence of an actual increase in child abuse -  shows that we all mean different things by “prevention” and have very different definitions of  “last resort.” 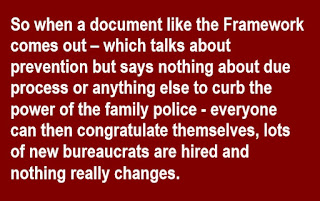 So when a document like the Framework comes out – which talks about prevention but says nothing about due process or anything else to curb the power of the family police - everyone can then congratulate themselves, lots of new bureaucrats are hired and nothing really changes.  The biggest beneficiaries might be Maine’s paper mills – because so much paper will be needed for all those “theories of change” “logic models” “strategies” (which will require “strategic plans”) coordinating committee agendas and all the other gobbledygook included in the Framework document – all of which would delay actually doing anything.

Reducing what we call child abuse is a problem that does not require any of those documents.  Nor does it require more time, paperwork and meetings, meetings, meetings, to enhance “cross-systems collaboration,” and it certainly doesn’t need more middle-managers reporting to Todd Landry.  What’s needed is this:

● Let them buy the help they need.

● Provide meaningful due process for families, especially high-quality family defense, something not mentioned at all in the Framework.

I suspect one reason we don’t see anything like this in the Framework is that the “lead organizations” behind it include far too many “providers” who live off the system as it exists today.  So the recommendations are structured in a way that they add on to the existing system, but don’t challenge it.

Meaningful due process is the most important change the system can make – and the one providers would hate most.  Because even if Maine had all the help families need, in the current climate of foster-care panic, caseworkers are going to be afraid to use it.  That’s the nature of foster-care panic; every worker is afraid of having the next tragedy on their caseload, and every judge is even more afraid than before to let a child go home.  This is why it’s so important that the legislature send a strong message to Landry, Alberi et. al. that foster-care panic is making things worse and they need to stop encouraging it or enabling it.

The one useful piece of paperwork

That leads me to the one piece of paperwork recommended in the document that would be useful: outcome measures.  Typically, what agencies call outcome measures actually are process measures: How many families were visited once a month, how low is the caseload in what percentage of cases, etc.

What is needed are agreed-upon measures that tell us if children are safer.  Ideally, the Legislature will commit to this right away.

Because right now the de-facto outcome measure is: No child will die.  I know of no statewide system anywhere that has ever achieved that.  But as long as that is the outcome measure, sooner or later, when a child dies, certain players will say this “proves” that the prevention measures failed, and the cycle will start all over again.

There needs to be a reaffirming of no child deaths as a goal, but a simultaneous repudiation of it as an outcome measure.  Outcome measures should be based primarily on something I recommended in the post about Alberi’s failures: Readings of a representative random sample of cases by unbiased experts (so not Alberi) supplemented by statewide data on overall reabuse and foster-care recidivism (the proportion of children sent home from foster care who are placed again).  Other measures can include reduction in placements in group homes and institutions and increases in the proportion of placements with relatives instead of strangers.

The good news in this document is entirely in one section, “Invest in Supportive Services.”  In particular, the recommendations on family resource centers run by agencies other than Landry’s agency, the Office of Child and Family Services, increasing the availability in rural areas of buprenorphine, a treatment for opioid addiction, and, especially, more affordable housing. (There’s also a glaring omission: childcare.)  But while we’re waiting for the family resource centers and the new housing to be built, what about direct cash assistance so families can seek better housing in the existing market and buy the kinds of help the resource centers might offer?

Also, while it’s important that family resource centers are not run by OCFS, it isn’t much better if they’re run by groups like some of the “providers” who signed onto the Framework – in particular those that oversee foster care and institutionalize children in residential treatment centers. Would you go to a family resource center staffed by “mandatory reporters” of child abuse whose institution could gain financially if your children were taken?  Rather the centers should be run by community organizations unconnected to the family policing system.

The Framework buys into the idea that Maine needs even more caseworkers.  That tacitly assumes the current level of investigations and removals is correct.  To the extent that there is a need for more caseworkers it is solely to restore the capacity of Alternative Response agencies – not OCFS.  And the idea that OCFS needs more middle managers again assumes that the issues are far more complex than they really are.

As for all the talk about training, that always makes my skin crawl. That’s because for decades that’s been the knee-jerk all-purpose response to anything wrong in child welfare.  It never works, because training is no substitute for due process.

When it comes to oversight, the fact that they want to give the ombudsman more power is a de facto contradiction of everything else in the Framework.  But the Legislature itself should be providing ongoing oversight - and that also is recommended in the Framework.  Lawmakers should pass any laws needed for this and repeal any that get in the way.

Beware of people who declare themselves advocates of prevention but constantly talk about the need for a “public health” approach.  That’s because child abuse isn’t a public health problem. It’s a social justice problem.

Posted by National Coalition for Child Protection Reform at 1:36 PM