Federal report says child abuse deaths DECREASED during the pandemic – but an Associated Press reporter doesn’t seem to want you to notice.


UPDATE: APRIL 29, 2022: Because of the reporting discussed below, I had very low expectations when I learned that the same reporter was examining the use of "predictive analytics" in family policing.  I was wrong.  That story is excellent.

For a far more nuanced take than was offered by AP, check out this story from The Imprint. Their bottom line:

It all points to the notion that in the early months of the pandemic, as lockdowns began and schools were closed, there was not the kind of unseen surge in abuse and neglect that some feared.

Remember all those scare stories about how, because COVID-19 prevented overwhelmingly white disproportionately middle-class “mandated reporters” from constantly having their “eyes” on children who are neither, their parents would unleash upon their own children a “pandemic of child abuse”?

As with so much bad child welfare journalism, this false narrative only hurt the children it was intended to help.  It risked deterring families from seeking help when they needed it most, encouraged putting even more families under constant, oppressive surveillance, increased the likelihood of needless placement in foster care, reinforced stereotypes about nonwhite families – and, particularly before vaccines, risked spreading COVID-19 among families and caseworkers alike.

Given that, you’d think it would have been big news when the federal government released its annual estimate of child abuse fatalities and found that, in the year ending Sept. 30, 2020 – including the first six months of the pandemic – child abuse deaths actually decreased. 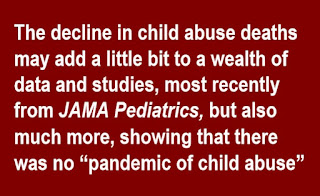 The decline in child abuse deaths may add a little bit to a wealth of data and studies, most recently from JAMA Pediatrics, but also much more, showing that there was no “pandemic of child abuse” – and journalists should think about how quickly they bought into stereotypes about nonwhite families when they rushed to write those stories.

But what if you're as deeply committed to the “pandemic of child abuse” myth as Associated Press reporter Sally Ho seems to be?  She wrote one of the big fearmongering stories last year, a story quoting, unrebutted, an official with an association of school social workers suggesting it’s a good idea to call a child abuse hotline “if a child seems dirty." (No, I won't link to it, but it's still pinned it to the top of her Twitter feed.)  Well, then apparently you don't let data, or studies, or JAMA Pediatrics spoil a good “master narrative.”

Instead, Ho’s latest story on the topic is headlined:

Child abuse report: Deaths of Black children up in pandemic

The latest national child welfare report shows an increase in the number of Black children who died, even though fewer abuse-related fatalities were investigated in the yearlong period that included the first several months of the pandemic

There is nothing in the story to support that subhead.  There were fewer reports alleging child abuse and therefore fewer investigations, but that does not mean fewer “abuse-related fatalities” were investigated.  The subhead seems to be based on the assumption that, thanks to the pandemic, Black parents were more successfully killing their children without anyone knowing about it.  (Reporters don’t generally write the headlines and subheads, that may well have been some copy editor making an inference – understandable, since that is what the story implies.)

In the story itself, the decline in total child abuse deaths not only isn’t the lead, it is barely mentioned in the 8th paragraph of a 12-paragraph story.

Similarly, when family policing agencies were forced to pull back, one of the first stories debunking the "pandemic of child abuse" myth noted that, in poor communities of color, parents say it feels like "the pollution lifting." Note that the comment is attributed, not an editorial position by the reporter.  In contrast, the AP story simply declares that the decline in investigations is "a troubling trend." That's fine (albeit wrong) in an editorial. It has no place in a news story.

But what about that increase in child abuse deaths of Black children? 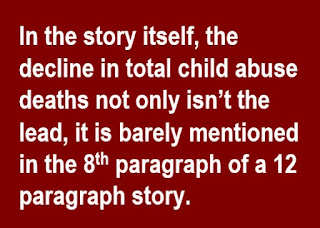 Ho cites an estimate of 504 such fatalities in 2020, an increase of 73 compared with 2019.
She neglects to mention that the 2019 figure was a significant decrease from 2018, when there were 470 such deaths. The increase between 2018 and 2020 was 34; less than half the increase than if you choose 2019 as the base year. (On the other hand, the 2018 figure was a significant increase from 2017 – even though there was no pandemic. This very volatility further indicates something discussed in detail below, that fatalities are an unreliable way to draw conclusions of any kind about child welfare systems.)

But since that’s what AP has chosen to use without context, here’s the context:

We’re looking at an increase of 73 (or 34) in a universe of more than 8.5 million Black children.  That means, relative to the total number of Black children in America, between 2019 and 2020 the number said to have died of child abuse increased by 0.0009%.

And, for reasons discussed below, some of the supposed increase might be an artifact of subjective decision-making – and bias – in determining cause-of-death.

All this illustrates the primary reason one can draw no sweeping conclusions of any kind from child abuse death numbers.  It is a reason I’ve repeated often on this blog, a reason for which we all should be grateful: Though each is the worst imaginable tragedy, the number is too low to draw sweeping conclusions.  The number can fluctuate easily due to random chance -- or simply errors in reporting statistics as they are passed from police departments (in some cases) to county child welfare offices to state child welfare agencies to the federal government. 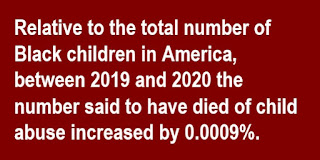 Another key factor is the potential for bias.  One might think that nothing would be more straightforward than determining if a fatality is due to abuse or neglect.

But what about a case in which, say, a three-year-old wakes up early one Sunday morning.  Mom and Dad are asleep.  They didn’t know how adept their child had become at opening the back door.  He wanders away, falls into a body of water and drowns.  Accident or neglect?  If the body of water is the pool behind the McMansion it will probably be labeled an accident.  If it’s a pond behind a trailer park: Neglect.

So, what do you think?  Which racial or ethnic groups are more likely to be involved when a death is mislabeled neglect?

The Associated Press story ignores all that. It leaves the impression that the increase is because as soon as mandated reporters turned away, Black parents unleashed savagery on their children.  The story includes the same boilerplate that became standard in stories pushing the pandemic of child abuse myth:

The federal data confirm a drop by hundreds of thousands in documented cases of child abuse reports, investigations, substantiated allegations and support for at-risk families. But experts say that’s not necessarily good news — children were out of the public eye during the pandemic, and some cases likely weren’t reported until they became more severe, if at all.

Experts say?  There are plenty of experts who say that is b.s.  But those experts are ignored.
They don’t even get the usual “to be sure graf” (as in “To be sure, not everyone agrees with the thesis of our story, [insert token quote or statistic here] but, [return to the reporters’ thesis]…”

Two government officials are quoted, but they do nothing to challenge the story’s thesis – in fact, they say pretty much nothing at all. And even then, one of the officials JooYeun Chang, was taken out of context.  The Imprint has what the AP story left out.

Instead, the story cites just one alleged “expert,” who, in the long, ugly tradition of “health terrorism” offers up the fill-in-the-blanks quote the reporter seemed to want:

The numbers on fatalities in particular are concerning, because such cases are notoriously underreported, said Amy Harfeld, of the Children’s Advocacy Institute. Social workers often investigate a child’s death only if the family had already been involved with a child welfare agency.

Even if one assumes that such cases are underreported and, in fairness, given all the failures I’ve just described, it’s reasonable to believe that, this is not a new phenomenon.  There is nothing to indicate that the number of missed cases increased in 2020, so this does nothing to support the “pandemic of child abuse” theory.  In fact, it is no less possible that, without as many false allegations and poverty-confused-with-neglect cases clogging the system, workers found more cases when children were in real danger, and that’s why total child abuse deaths went down.

But the weirdest part of the quote is the implication that a child abuse death doesn’t make it into federal data unless it’s investigated by social workers.  A death determined to be child abuse is reported and counted whether it’s investigated by social workers or by law enforcement. And I’m sure even Amy Harfeld doesn’t believe that, upon discovering a suspicious death of a child, the cops say “Nah, don’t bother to investigate; they were never reported to child protective services.”

Yes, this should cut both ways

But wait: Does that mean we also can’t draw sweeping conclusions from the overall decline in child abuse deaths?

More important, none of the evidence debunking the pandemic of child abuse myth depends exclusively on fatality numbers.  But none of that evidence, and none of the experts who disagree with the story’s premise got even a word in edgewise.

Posted by National Coalition for Child Protection Reform at 2:16 AM