Foster care as a shakedown scheme

Even if you don’t think the family policing system was designed as a way to squeeze every last dollar out of poor families and perpetuate their poverty, these three stories show that’s how it works.

The biggest problem with the so-called “child welfare” system is that it has nothing to do with the welfare of children.  The biggest problem with what should properly be called the family policing system is it does enormous harm to children by tearing them needlessly from everyone they know and love and/or putting their families under an onerous regime of surveillance. 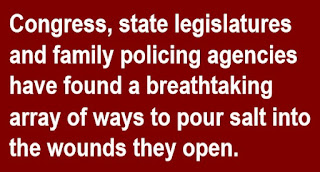 But while they’re at it, Congress, state legislatures and family policing agencies have found a breathtaking array of ways to pour salt into the wounds they open.  Three examples of excellent investigative reporting, published in 202,1 serve as a guided tour of some of these dark alleys of family policing, from the start of a case until after it’s over.

Each individually paints a deeply disturbing picture.  Taken together, they reveal a hellscape which, even if it is not designed to squeeze every last dollar out of poor families, perpetuate their poverty and prolong the trauma of foster care nevertheless does exactly that.

Temporary Assistance for Needy Families (TANF) replaced welfare as we knew it.  By ruthlessly cutting people from welfare roles, states built up surpluses that are supposed to be used to help those same impoverished families become self-sufficient.  Instead, in a process that is legal, but morally is theft, a process we first flagged more than a decade ago, many states take the money and use it as a child welfare slush fund, to fund family police investigations and foster care.

So, for example, because she couldn’t get TANF funds, a mother in Arizona had to work from sunrise until 10 p.m.  So she wasn’t home when a babysitter allegedly sexually abused her child.  That led to the child being thrown into foster care.

But let Eli Hager explain, in his story for ProPublica:

Arizona spends only 13% of its welfare funding on welfare itself, and none on child care or pre-K. Meanwhile, it diverts 61% of the dollars to the state’s child protective services system, which amounts to more than $150 million repurposed in this way every year, a ProPublica review of budget documents shows.

In other words, welfare in Arizona largely goes not to helping poor parents financially but rather to the state’s Department of Child Safety — an agency that investigates many of these same parents, and that sometimes takes their kids away for reasons arising from the poverty that they were seeking help with in the first place. …

“It all connects,” [the mother] said. “If I’d gotten just a little bit more help, I wouldn’t have had to work until 10 p.m. every night, and I could have been with my child, and this never would have happened.”

It doesn’t end there.  Arizona and other states also take this money that’s supposed to help impoverished parents raise their own children and hands it to middle-class foster parents to do it instead.  And, by the way, Arizona lavishes money on foster parents at one of the highest rates in the country. As of 2015, the state paid anywhere from $670 to $1,392 per month per child – tax-free -- plus health insurance for the foster children.

By the way, in at least one state, Georgia, TANF funds were diverted to the family policing system in order to fund a settlement of one of those class-action McLawsuits brought by the group that calls itself "Children's Rights."  CR is making a lot of noise suggesting that they're changed - but so far, they have not reopened any of their odious consent decrees - something to keep in mind before accepting at face value their endless fundraising pitches.

Now, suppose that an impoverished family was getting by in part on a Social Security program that helps pay expenses for some disabled children, such as keeping a roof over everyone’s heads.  When the children are taken, the family police often rush to take away that money too. (Benefits paid under another Social Security program, survivors’ benefits, also are vulnerable.)  So now, that income is gone and the family is more likely to lose their home – which, of course, prolongs foster care for the child.

Even if you think: “Well, we can’t trust those parents with the money, (after all, we all know what they are like, right?) it has to be held for the children!” that’s not what happens.  With rare exceptions, family policing agencies aren’t holding it for the children. They’re keeping it for themselves to run their bureaucracies, as Hager, then at The Marshall Project, and Joe Shapiro of NPR explain in these stories.  And to see how it all plays out in one city, check out Steve Volk’s story in the Philadelphia Inquirer.

Well, no, of course the family police don’t call it ransom.  But, again as we’ve been pointing out for some time, if you tear a child away from a parent and make the parent pay money to get the child back, clearly, the proper term for that payment is ransom.

And that’s exactly what happens.  Having had the children taken, often because of their poverty, parents often are billed for part of the cost of the care.  In some cases, they can’t get their child back until the ransom is paid.  So the foster care is prolonged.

As NPR’s Shapiro and Teresa Wiltz, now at Politico, report, this policy is as stupid as it is cruel.  Not only does it extend the time that children are kept away from their families, it actually increases the cost to states, since no parent can pay the full amount.  Between that and the amount spent on enforcement, the whole deal costs states money.

But that doesn’t stop states from trying. Collections went up in 2020 – because it was easy for states to grab COVID relief checks and use them to fund foster care, instead of letting families use the money in their time of greatest need.  As NPR explains:

Billing parents for foster care undercuts the efforts of child welfare agencies to help parents and children reunite, according to the limited research on the subject. The added debt extends the time children spend in foster care and then keeps families in the impoverished conditions that put children at risk for going into foster care in the first place.

Charlie Borrell, a county commissioner in rural Minnesota who describes himself as being “as conservative as they come” told NPR that forcing parents to pay ransom (again, our term, not his):

"sets them up for failure"… He's seen mothers, often single mothers, work overtime or take on a second job to pay off the debt – "and then the kids are left alone and unattended and do not get the parental guidance that they need."

And, of course we know what else can happen when the kids are left alone unattended.

Posted by National Coalition for Child Protection Reform at 2:50 AM