Miracle in Pinellas County, Florida! Child Abuse suddenly plummets by 50%! (Unless there’s some OTHER reason the sheriff suddenly found a way to stop taking away so many kids)


Hey, remember when the Sheriff of Pinellas County, Florida, Bob Gualtieri, whose office is responsible for child abuse investigations in the county, insisted that his officers never, ever needlessly take children from their homes?  Remember how he said his officers followed a Florida Department of Children and Families framework for investigations “to a T”?   Remember how he insisted on this even though Pinellas tears apart families at one of the highest rates in Florida, even when rates of child poverty are factored in?

Less than two months ago, he said this to the Florida news site Florida Politics

“We will always make the decision that is in the best interest of the children, regardless of what others may want, and that includes removing them from harmful situations when required. All of our removal decisions are reviewed by a judge and routinely upheld. We will continue to act to protect vulnerable children.”

Later, Gualtieri bragged about refusing requests from the former “lead agency” running foster care in the county, Eckerd Connects, to please stop taking so many kids.  And he did all this knowing that Eckerd was placing the children in situations so horrible that Gualtieri himself was launching a criminal investigation. 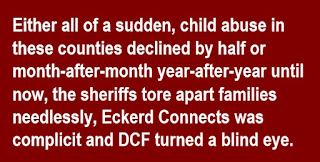 There are two possible explanations for this: Either all of a sudden, child abuse in these counties declined by half  -- or, month-after-month year-after-year until now, the Sheriffs tore apart families needlessly, Eckerd was complicit and DCF turned a blind eye.

If the data are correct, it is a small, encouraging first step - though it would still mean Pinellas County is tearing apart families at a rate above the state average, even when rates of child poverty are factored in.

DCF Secretary Shevaun Harris deserves credit for being the first person in that job since George Sheldon to at least have the courage to admit that wrongful removal is a problem and take some steps to deal with it.  (We’ll see if she still has that kind of courage when the Miami Herald and the Tampa Bay Times come after her – as they will the next time there’s a high-profile death of a child “known to the system” in these counties.)

But it’s not nearly enough.  The DCF press release is not a testament to sudden success but to horrifying long-term failure – by Eckerd Connects, by the sheriffs and by DCF itself.

Think of what that press release really means: Hundreds, perhaps thousands of children needlessly traumatized, possibly for life, after being taken from everyone they know and love due to Gualtieri’s knee-jerk take-the-child-and-run approach and the failure of others in the system to stop it.  Many of those children were taken from homes that were safe or could have been made safe only to be abused in foster care.  Others were placed in conditions so horrible that, as noted above, Gualtieri himself has launched a criminal investigation. 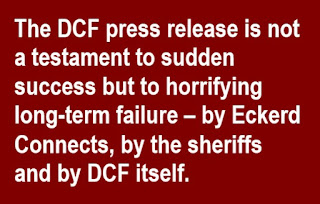 Gualtieri may claim that it was only all of a sudden that other agencies gave him alternatives to taking away all those children.  The press release seems to suggest as much – thanks to the magnificent leadership of DCF, of course.   But Gualtieri is also the one who demands no excuses from others.  As he put it when talking about Eckerd: “You don’t whine about it. … You figure out a way to make it happen." So why didn’t he take the initiative and build the necessary infrastructure of prevention to “make it happen”?  Why didn’t he show the same leadership as his counterpart in  Broward County, where the sheriff understood the problem and did something about it.  Broward tears apart significantly fewer children than Pinellas or Pasco.

As for DCF, it effectively admits that poverty was confused with neglect in the part of the press release in which it brags that it

Launched a direct referral process to Hope Florida – A Pathway to Prosperity and Care Navigation for the Sheriff’s Offices, providing assistance to 272 families who faced economic barriers in open child dependency cases.

There should be no such thing as “economic barriers in … child dependency cases” because poverty is not neglect.  And again, why did Gualtieri and his counterpart in Pasco County wait for DCF – why didn’t they do this themselves?

A failure of the judiciary

All of our removal decisions are reviewed by a judge and routinely upheld. 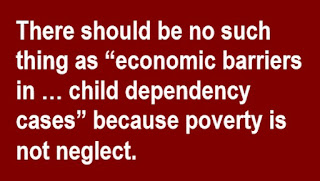 Yet now we know that, at least half the time, those decisions almost certainly were wrong.  This further illustrates the need for Florida judges to start wielding gavels instead of rubber stamps – and it illustrates the urgent need for Florida to institute the model of high-quality family defense that has allowed other communities to dramatically reduce needless foster care with no compromise of safety.

A failure of journalism

And finally, there is another factor: journalistic malpractice by the most powerful media organization in the region, the Tampa Bay Times.

Imagine how much better off hundreds of children would be now had the Times news side not ignored or downplayed the issue of wrongful removal.  How many children would have been spared the hideous conditions of Eckerd “care” had the Times editorial board, under former Editorial Page Editor Tim Nickens, crusaded to reduce entries into foster care instead of to increase them?  (By the way, Nickens also cited the fact that the judges kept rubber-stamping removals as some kind of proof they were justified.)

And again, will DCF Secretary Harris have the guts to stand up to the Times, and the Miami Herald, when they come after her?

Posted by National Coalition for Child Protection Reform at 2:03 AM